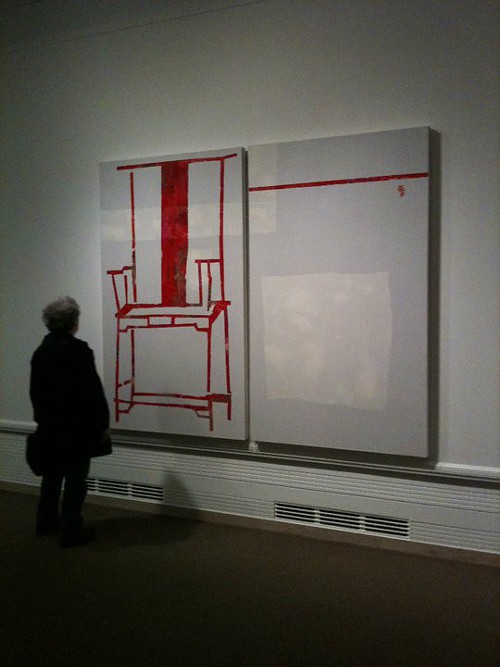 Seattle Asian Art Museum is promoting its exhibition of contemporary Chinese painter Wang Huaiqing as "a story about a mature artist moving beyond politics and exploring purely artistic issues. Because of that," the museum claims, "Wang is an important contemporary Chinese artist whose artistic sensibility fosters greater cultural understanding."

But today, when the Nobel Prize was awarded to a Chinese dissident who had to be represented by an empty chair at the ceremony because he is jailed for criticizing the government, I am not sure that art is made stronger by going "beyond" politics.

Instead, I see Wang Huaiqing's paintings of empty chairs, moody fields of discarded furniture, and empty, red bed frames in an entirely richer way because of the politics they inevitably contend with, however deeply hidden in the imagery. These paintings are full of emptinesses, blanks where statements are held back and people have been erased.

Check out the show at SAAM, in honor of Nobel winner Liu Xiaobo, this weekend. (For more pictures from the show, friend me on FB.)

Comments 0
Tags: Visual Art Blogs
The Stranger depends on your continuing support to provide articles like this one. In return, we pledge our ongoing commitment to truthful, progressive journalism and serving our community. So if you’re able, please consider a small recurring contribution. Thank you—you are appreciated!
CONTRIBUTE NOW