The Invasions Begin: Nick Cave Interviewed, and on the Streets of Seattle 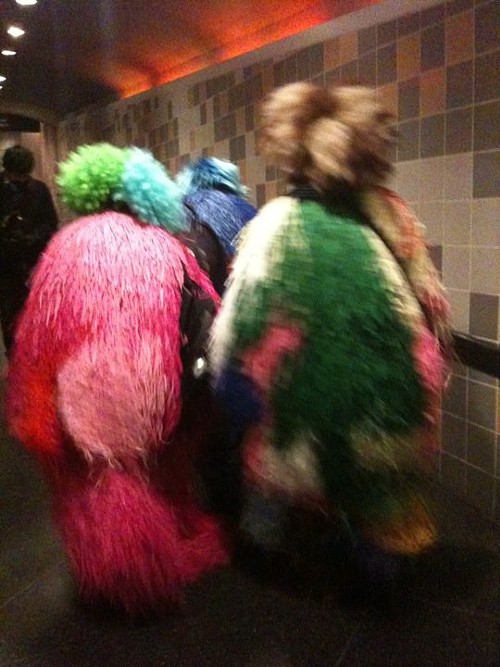 Yesterday was the first "invasion" of performers in visual artist Nick Cave's "soundsuits."

The suits are bright and bold. They're every color ever. They are made of discarded materials—straw hats, braided rugs, mirrored textiles, macrame, buttons and sequins—and they can stand alone as sculptures or be worn by dancers. When dancers wear them, that's called an "invasion," and it's going to happen around the city for the duration of the show, Meet Me at the Center of the Earth, through June 5. Some invasions will be planned, others will be surprises. (Invasion schedule, hints for secret invasions on Twitter and Facebook.)

Yesterday, the dancers wore raffia suits and clown wigs with their faces entirely visible, which was confusing since Cave has often talked about the suits hiding race, class, and gender. They appeared inside the window at Nordstrom's—and because it was the first time, hordes of press had been notified, and everybody seemed to know what was coming. People giggled at the short performance. An older woman named Amanda Wood who had just had her hair done and was passing by shared with me that this reminded her of the days when they did foot fashion shows in the Nordstrom windows in the '50s, when the women were covered entirely by a curtain except for their beautiful feet. That sounded amazing. "Have fun with this!" she called to me as she walked away during the performance.

It was a little more interesting when the raffiafied performers rode light rail back to the museum, but I still got the feeling people just thought they were a bunch of Burners. "People are desensitized," one of the dancers joked. The power of the invasions will depend, as it should, on the context that arises right in the moment. Keep an eye out.

Just now I put up my podcast with Cave. Hear the man himself talk about the exhibition and the performances.

Comments 3
Tags: Visual Art Blogs
The Stranger depends on your continuing support to provide articles like this one. In return, we pledge our ongoing commitment to truthful, progressive journalism and serving our community. So if you’re able, please consider a small recurring contribution. Thank you—you are appreciated!
CONTRIBUTE NOW