Love Letter to the Shotgun House: A Seattle Artist and Architect at Prospect 2 in New Orleans

The shotgun house at 5427 Burgundy Street in the Holy Cross neighborhood of the Ninth Ward has been abandoned since Hurricane Katrina. It's a nice family house, serviceable and graceful, with 11-foot ceilings. It wasn't hit the very hardest—its bones are still good. Shortly after the storm, its wet, molding walls were removed. The wiring and plumbing came out, too. Now, the house is a shell, with secrets that go all the way down to the studs.

Who lived here? Why didn't they come back?

Who lived here before that? 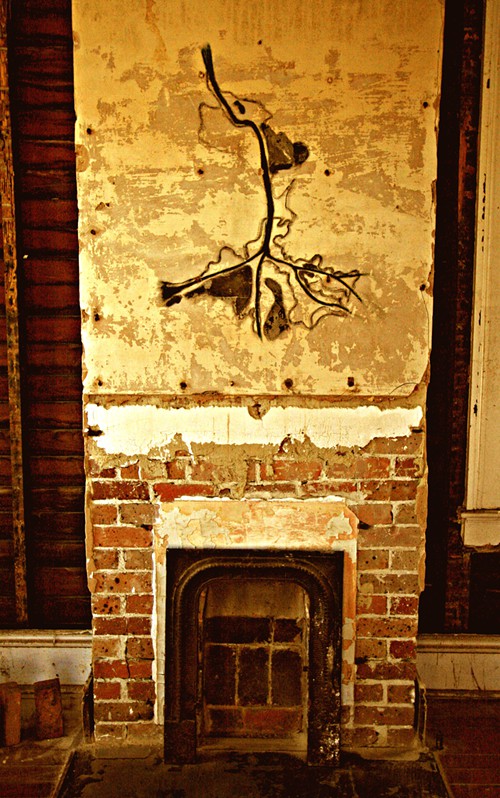 The installation is meant as a cross between art, architecture, and a social history of the style of house, some 150 years old, that's nicknamed "shotgun" for the old saying that you can shoot a bullet from the front door straight through the house and out the back. It has always housed working people—German and Italian immigrants, African Americans who worked by day and played jazz by night. Tusa's own grandparents lived in a shotgun in New Orleans after they moved from Sicily in the very first years of the 1900s.

"What you see," Fels said, "is a combination of stuff we prepared in our studio in Seattle, and stuff we’ve made here. We’ve prepared panels, paper hangings that are 3 feet wide by 8 feet long, and they tell various aspects of the story of these kinds of houses, but this isn’t an ethnographic [study], we’re not trying to be a history museum—it’s a work of art. But if you pay attention you can learn a lot."

You can learn about the way the Mississippi River delta changes over time, or about the shotgun's ties to Haiti, or about what the architectural details—ironwork and woodwork and plasterwork and moldings—say about the people who crafted and lived with them. Fels says he sees Home Atlas as a sort of Mad Homes that's more closely aligned with the architecture where it lives.

What we can't know is what's to come for this house, or this neighborhood. It is close to the river, so it has gentle breezes and gardens. Before the storm, the neighborhood was poor, and almost entirely African American. (Here's a Katrina Pain Index.) Only half the residents have come back. Many houses are standing empty, some are being bought by young white folks. Fels says their sale prices are around $20,000.

The African American neighbors who returned aren't grudge-holders despite their horrific experiences, Tusa says she's observed. They're part of a New Orleans way: "People in New Orleans aren't as concerned about money as they are about pleasure—food and drink and talking and sitting out on the porch."

When I talked to Fels and Tusa, Home Atlas hadn't opened yet. "Evocative is what we're going for," Tusa said.

Home Atlas opened this weekend and will be up through the end of January. (To see Fels's work locally, visit the ghost viewfinders along Alki that he made with Joe Feddersen and Jaune Quick-to-see Smith.)

If you're in New Orleans and get to see Home Atlas, write and tell us what it was like.