Ever since its exuberant arrival on the Seattle scene in March 2010, NEPO House has been a specialist in small delights. NEPO is just a home. It's in Beacon Hill. Just a regular family lives there. One of the family members happens to be the artist Klara Glosova. She makes perfectly trompe l'oeil ceramic versions of underwear, and ceramic popsicles wearing sweaters, and ceramic sculptures based on Internet memes, like that cat sausage-wrapped in a blanket. That description makes her sound flip, but she's not. She just wears her sophistication lightly. I've never met an artist who didn't want to work with her or join the universe of NEPO, which has included most of this city's artists in installations at the house and now expanded to include an annual 5K art parade. This past Saturday was the second one.

The rhythm felt smoother than the inaugural version, which started in the International District and culminated at an overcrowded NEPO House; this year, the procession moved in reverse, starting on the street near the Beacon Hill house with a registration booth run by the Vis-A-Vis Society.

I didn't see all of the more than 40 projects that were out there, or make it all the way on the trail. For instance, I heard that Sarah Galvin was lying in a ditch somewhere, in the service of a poetry reading, but I did not find her.

I did find my own highlights. For instance: the fantastic experience (by Julia Freeman) of holding hands with someone (presumably Julia Freeman) hidden behind a curtain at a booth on the street. Sitting down and taking her hands until she let yours go resulted in being handed the gift of a beautiful photograph on a string.

Maggie Carson Romano's piece SLAM was a door installed in a blackberry-infested empty lot. The door had blowing fans on both sides, which kept it opening and closing gently but never opening or closing entirely. Like Freeman's handholding booth, SLAM was the perfect sort of anti-spectacle that makes the world a little better for a minute.

In an old garage (might every art experience be better in a century-old, single-car garage?), Virginia Wilcox displayed a slide show of her photographs from the haunting area of Salton Sea. Up a flight of steep stone steps to another house on Beacon Hill, you were led into a curtained-off enclosure/entrapment beneath a deck. Creepy. Even creepier: Inside, it was just you, aggressive sounds (like bees approaching), and, on an altar, a smelly pile of beef tartare mixed with other pungent stuff, reportedly including urine from a doe in heat. It felt like deserved punishment, and I wondered what I'd done wrong. The artists were Brandon Aleson and Leanne Grimes. 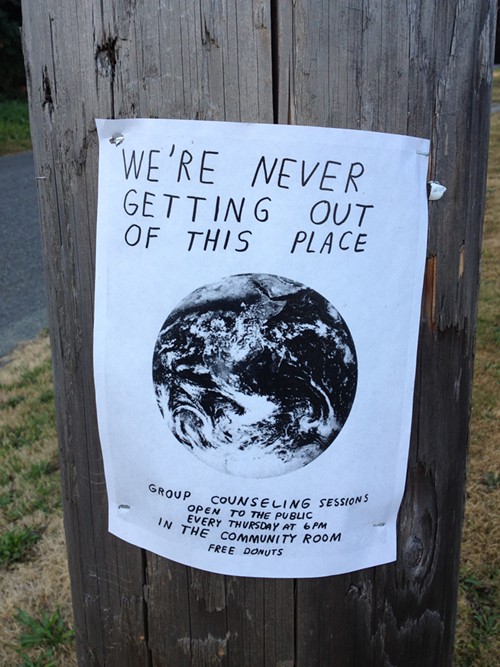 Who were the two femme fatales dancing/freeze-framing in and around the old parked car? They were lightly perverted. I feared and loved them. I wanted to be them. I wanted to know what they meant to each other, most of all. I think they were Alice Gosti and Monica Mata-Gilliam.

As far as I know, Hanita Schwartz stood and blew bubbles for three straight enchanted hours inside another one of those garages. She made each bubble slide across a glass shelf, casting its shadow (and sometimes two or more overlapping) onto a video projection on the wall.

On the telephone poles throughout were hilarious flyers: some announcing a lost flyer, and then a found flyer. Or a very difficult situation, such as living on earth and not being able to leave. These were listed as by "Nathaniel Russell Russell," but we think they are just by Nathaniel Russell.

Comments 5
Tags: Visual Art Blogs
The Stranger depends on your continuing support to provide articles like this one. In return, we pledge our ongoing commitment to truthful, progressive journalism and serving our community. So if you’re able, please consider a small recurring contribution. Thank you—you are appreciated!
CONTRIBUTE NOW