I just heard; it happened last night, I'm told. I know he was very old, and everyone has to die, but I can't help but feel that quite a lot died with this particular old man. The fact that this person will never make a new painting again is nothing but sad.

Any public information about his memorial will be posted here, either by me or by his gallery, Foster/White (more of his paintings are there), if they get to it first in the comments. Please leave appreciations for him; it would be nice for family and friends. R.I.P.

*An update with a full obituary, a beautiful note of appreciation from artist Chuck Close (who studied with Mason), and a photograph of Mason on his 93rd birthday in July, is on the jump. I also want to say that I love this comment, contributed yesterday when this post originally went up:

Horribly sad. He was my favorite NW artist hands down. Golden Burpee has been the background on my iPhone for a long, long time. I will hold tight to the works he left us with. I wish I had one to call my own.
Posted by JeriAnn on February 6, 2013 at 4:14 PM

Alden Mason experienced his 93 years in ways most of us can only envy. He had a connection with nature, wildlife, plants, birds, the earth, the culture of indigenous peoples that cannot be learned. It was a gift. Alden appreciated his gift and did his utmost to bring others into the moment of discovery. Alden Mason was a natural.

One of the Northwest’s most influential artists, Alden Mason was born in 1919 in Everett, Washington. Alden grew up exploring nature and a sense that the rest of the world was having a lot more fun than he. His six-decade long artistic career would prove Alden was indeed having fun, experimenting and breaking artistic traditions and conventions.

Alden received his BFA (1945) and MFA (1947) from the University of Washington and returned to teach (1949) for another 32 years. During his long career at UW he inspired students with his dedication, vivacity, encouragement and willingness to experiment. Mason’s students included Chuck Close and Robert Shimomura.

Alden’s exhibition career spanned both sides of the US with shows in Seattle, Los Angeles, San Francisco, Vancouver BC, and New York. Even after crippling health issues as a result of his overexposure to oil and acrylic mediums, Alden continued to dedicate his life to his creations.

A perennial student, Alden took his curiosity to far reaches of the world. His visits to South America, Mexico, Africa, and Papua New Guinea left their imprint on the subject matter and style of his paintings. While Alden’s travels were a great influence on his work, his domestic life and memories of childhood and family were equally important. This combination of child-like wonder of the larger world around him gave rise to delightful combinations and some of his most successful paintings.

Alden was a kind, vivacious man whose love of dancing, flirting, and story telling made him a unique personality. His natty style included his signature fedora and neck kerchief. Alden loved regaling visitors with stories of his travel, telling riddles, and pun-laden jokes. As Alden said, ‘I have good genes and wear them every day.’

‘Iconic Seattle artist Alden Mason passed away peacefully this morning. He was an adventurous and enthusiastic naturalist and painter. He loved the northwest landscape, color, birds, natural concretions and to dance to rock and roll. We shall miss his mischievous twinkle, sly wit and flirtatious self. Alden was a bright light.’ – Phen Huang, director of Foster/White.

Foster/White Gallery is proud to represent Alden Mason since 2002. 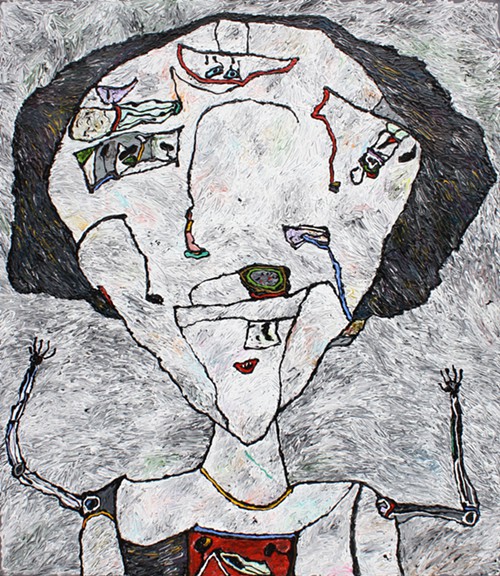 Alden Mason was my teacher, my mentor and my friend. He has probably had more impact on my work and my career than any other person. I wouldn’t be who I am today – or as successful – if it weren’t for Alden.

I consider him to be the greatest painter to come out of the Pacific Northwest - for me, even greater than Mark Tobey or Morris Graves. I studied with him from 1960-1962. He was encouraging, inspiring and often tough on me – probably when I needed it. I visited him often after I left for Yale and for the rest of his life whenever I was in Seattle, and he visited me several times in New York.

Luckily, we talked a week ago and I was able to tell him about the impact he had on me, my life and my work and that I loved him like a father.

Alden Mason is on Historylink, too.

Comments 10
Tags: Visual Art Blogs
The Stranger depends on your continuing support to provide articles like this one. In return, we pledge our ongoing commitment to truthful, progressive journalism and serving our community. So if you’re able, please consider a small recurring contribution. Thank you—you are appreciated!
CONTRIBUTE NOW