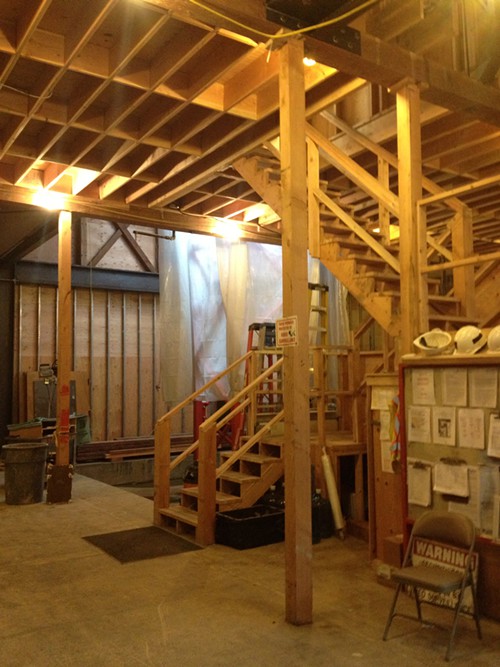 On Tuesday I snuck into the gleaming construction site you see above. That's your first glimpse when you push open the door of the charming caramel-brick storefront at 325 Westlake—a site promising to become a big, beautiful, new contemporary art exhibition and residency space in South Lake Union, going under the name Mad Art. The windows are all covered, so you can't see in otherwise. I ducked in from out of the rain, and nobody saw me. It does look beautiful despite this quickly snapped shot. High ceilings, exposed beams, exposed brick, dramatic central staircase flooded with sky-light. (I'm hoping to take an actual tour soon with the architects and organizers.)

Remember that once-a-year project thingy that started in 2009 with some art displays in Madison Valley storefronts, then that smattering of sculptures that popped up on the grounds of Cal Anderson Park, then that art-festation of those about-to-be-bulldozed-houses on Capitol Hill?

All those were under the same umbrella: Mad Art. It was the brainchild of Allison Milliman, not an artist but a patron of the arts, somebody who wants to stay behind the scenes while supporting the artists. She thought up the idea while she was in Melbourne, Australia, where she appreciated unexpected art on the streets, according to her Mad Art bio.

The new person curating and acting as Mad Art's public face—its director—is Tim Detweiler, formerly of the Museum of Northwest Art and the James and Janie Washington Foundation (his bio here). He's overseeing its physical incarnation in South Lake Union. "It's going to be amazing," he told me a few weeks ago. I'm looking to find out more about how.

For now, see a couple more pictures of construction on the jump. Or learn more about the whole 325 Westlake building project.