Dawn Cerny's Blankets and Pietas: Give a Thought to Mary This Year

There is a very small, very hidden art show up now in Ravenna. Its title is Boys, Jokes, and Things. It's comprised of the first handful of works—sculpture and prints—exhibited by Seattle fixture Dawn Cerny since she became a mother.

I'm sorry if that's reductive. I know there were lots of other things going on in the life of her mind during the same period. There are references in the shows to writings, to faraway places, and to palindromes. For instance, she converted "A man. A plan. A canal. Panama" into "A man. A Plan. An Erection. Panama" for a title of one of her soft sculptures. The piece is a small approximation of a male figure. It looks like it was made of plaster, papier-mache, paint, wax, paper, and anything else the artist decided to drip or stick onto it.

As you walk around the figure, each side shows a different profile, each profile with a different-stage erection (limp, half-mast, fully up). He is hunched and a little sad-looking, and he reminds me of the boy/man in Georg Baselitz's painting The Big Night Down the Drain, which for reasons I don't know, I became attached to immediately when I saw it at a show in New York when I was in college. I bought a postcard, put it up in my kitchen, and had to explain it to so many people, but still didn't really know why I felt such sympathy for it. Maybe it's at least in part because it seems to have been so misunderstood. It was at first censored as obscene. I can't possibly see it that way; it looks like pure rue, regardless of the body parts involved.

The year she gives birth to a son, Cerny turns "canal" into "erection"—get it? Well, not really. It's nonsensical humor, the kind of joke that reflects a connection that doesn't get made, in this case the connection between body and word. As the gender line is crossed and a nonspeaking human being arrives, the palindrome is thwarted. Among artists who are also mothers, language and body are major themes; consider Mary Kelly's six-year-long Postpartum Document or even Catherine Opie's self-portrait nursing her son, in which the word "pervert" scarred into her chest—and previously appearing prominently in an Opie self-portrait—has faded almost entirely away. In Cerny's work, body and word have always been important, and in a productive quarrel. (See "Tender and Smash," my review of her last show.)

Cerny also is a political artist, which to me means her work is shaped by consciousness about societal positioning. In her 2006 exhibition at Gallery4Culture, wild dogs ran rampant across walls of royalty; I wrote the review "The Revolution Is Ill." She was taking large looks into books.

This latest work feels more in line with the narrator's perspective at the start of Monica Drake's latest novel, The Stud Book (read Paul Constant's review, "After the Fucking's Done"). She's a new mother, leaking and bleeding and holed up in an interior universe of blankets and baby flesh that should, for all its softness, be more, well, bucolic, or peaceful. Instead, to this PhD, it's warm, yes, but terrifying and horrifying, too.

Looking at Cerny's lumpy, abstract-ish forms in Boys, Jokes, and Things is a bit like feeling around inside something and finding entirely things that are only almost familiar. Specifically, I was hooked by her strange wallpaper of repeating pietas—that's a dead child you see, over and over—and her print series, of a dozen two-tone images of blankets in wrinkly heaps so they resemble camouflage. There's the feeling of a soft, warm bed, couch, house, and both hiding and getting lost in there, disappearing into some other new place. Another piece from the show is a pair of peering eyes trying to look out from a jungle, but covered over in their own camo. Such private experience is both inviting and frightening. I recommend going to the show (up through December 29; more images here), then reading Lesley Hazleton's Mary: A Flesh-and-Blood Biography followed by Colm Toibin's The Testament of Mary, if you haven't already. Take some time to think of Mary this season. 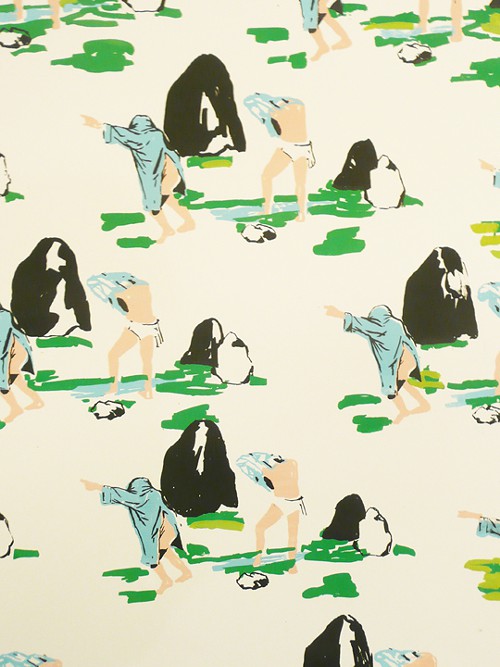