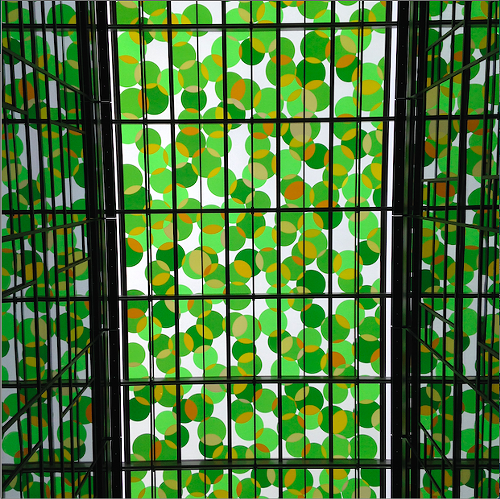 Just a few minutes ago, Ada Healey—overseer of $2 billion of real estate at Vulcan—announced to an assembled crowd the grand opening of a plaza at 515 Westlake Avenue North.

"The best part is that we've transformed a Seattle alley—and we are all familiar with a Seattle alley—into an urban forest," Healey proclaimed portentously from the podium set up out in the atrium.

Occasional drops of rain fell into the somewhat-open-air atrium, which stretches the full block west to east between Westlake and Ninth Avenue North. This is a thoroughfare through the heart of a new Amazon building. 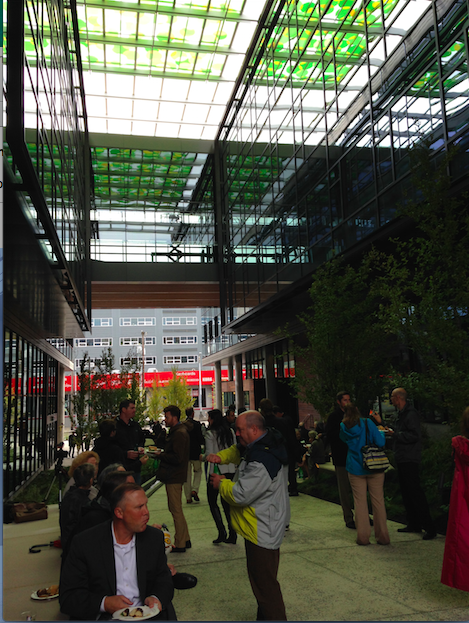 We were there to celebrate the special features of this meticulously designed false forest. There is art, yes, and it's by an internationally known artist, yes, but let us first turn to the "hot rocks, although now they're only warm," Healey pointed out.

In response, I sat down on a smooth, ovoid, sandstone-colored, butt-warming slab. There are several of them in the "urban forest." I predict the trampling of the delicately landscaped plants in the areas where those plants dare to block the edges of the hot rocks, preventing unfettered approach.

The art is many stories up, at the top of the atrium, in the form of a glass roof, open at the sides (hence, rain), printed with green and brown-orange-yellow overlapping circles. The design is meant to approximate what you see when you look up in a forest, light falling in the spaces between the trees as well as filtering through layers of foliage. The artist, Spencer Finch, explained to me that the art, for him, is both the abstract design you see when you look up at the glass, and the ambient colored light that filters through the glass and fills the atrium with a pleasant greenish hue. The piece is called There Is Another Sky. 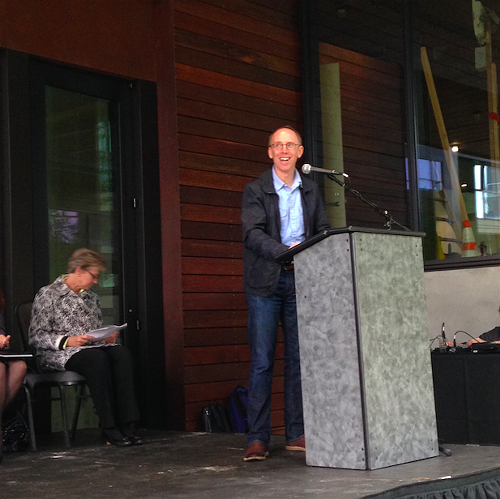 At this point, the 52-year-old New York-based artist is best known for being the only artist invited to make something inside the National September 11 Memorial Museum at Ground Zero, which opened just a few months ago.

That piece is called Trying to Remember the Color of the Sky on That September Morning, and it's personal and devotional as well as big and public. It's 2,983 squares of fragile paper loosely covering one giant wall. The papers are not displayed behind any protective covering. Finch hand-painted every square a different color blue, one for each person killed in September 11 attacks and in the 1993 bombing of the World Trade Center.

Finch is always chasing the color of light in specific locations at specific times, teasing at how impossible it is to pin down illumination. In 2006, his striped fountain of fluorescent tubes The Light at Lascaux (Cave Entrance), Sept 29, 2005 5:27 PM gleamed in a back room at Seattle's Western Bridge, creating a magically foreign environment for sure, whether or not it was the environment of the mouth of the legendary early-art caves on a September evening the year prior.

The commission at the Amazon building is Vulcan's, paid for out of Vulcan's civic-minded corporate policy that 1/2 of 1 percent of its construction costs go toward art—which has resulted in 18 commissions in South Lake Union so far. Originally at 515 Westlake, Finch wanted to install a glass roof that would turn the atrium into a perpetually sunny day. Through testing various patterns, he was able to design one that would actually perform the trick. But he ended up scrapping the idea because there was no relationship between what the abstract pattern looked like—"all galactic and swirly," he told me—and the light it would create. When you looked upward, nothing would let you know you were looking at a sun-generator. Even if you knew, well, you'd have to know, and the forest canopy, by contrast, is not hard to figure out if you spend a minute thinking about what it might reference.

To make the piece, the pattern was printed onto a film that's sandwiched between two layer of glass. The circles are in five different hues and five different opacities, to control and vary the filtering of the sky. To determine approximately how much light would actually filter through from that height of tree canopy—about four stories high—Finch and his assistants performed an experiment at his Brooklyn studio. One person would stand on the sidewalk and another would stand at the top of the four-story studio building holding out colored circular pieces of paper of various sizes, shades, and opacities. The final design was executed in Adobe Illustrator and a finished segment mocked-up using a crane on location.

The second half of There Is Another Sky was not functioning today, because it's intended for night viewing, Finch said. It's 100 "fireflies" in the form of LED lights down at ground level, calibrated to exactly match the color given off by the Jamaican firefly (a pot reference?). The lights zoom across the planted gardens astride the butt-warming slabs.

There Is Another Sky—good title—feels a little sterile, a little generalized (everyforest), and a little like a design feature rather than a work of art. The atrium is a pleasant place, but it's sterile and overdesigned, too, matching the aesthetic of much of South Lake Union. The sidewalks of the rapidly transformed neighborhood are so clean that on my way to the opening, I witnessed one woman demonstrating yoga to another woman right on the sidewalk. I find Finch to be an interesting artist; this does not feel like his greatest work.

To the September 11 Memorial Museum, he brought an intimate, handmade humanity—and an appropriate blurriness—to a site otherwise defined by flat metal surfaces, high-definition touch screens, and polished glass cases. He has a temporary colored-glass installation at the Morgan Library through January, and he's working on an exhibition based on James Joyce's Ulysses that will open this autumn at Marfa.

There Is Another Sky is the largest project Finch has completed for a corporation. He's creating another glass canopy, this time a public commission for a new London train station, that will survey 37 different cloud types, using opacity rather than color.

Finch graciously praised everyone involved in the Seattle commission, citing especially architect Patrick Gordon of ZGF. But it seems probable that Finch had many restrictions in what he could do in Seattle, maybe most of all the general anodyne attitude of the wealthy developing environment in South Lake Union. Vulcan's Healey wasn't the only one using generalized, overblown language at the podium. "We know that people just make places so vibrant," City Council member Mike O'Brien said, praising Vulcan and Amazon for "bringing people, which makes a neighborhood great," in line he might have lifted from Orwell. The word "vibrant" was favored by all the speakers.

Finch is giving a lecture tonight at Seattle Central Library. Admission is free and doors open at 6:45. You should go. 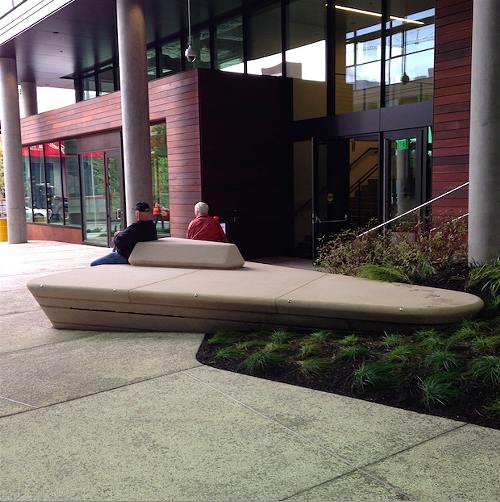 Comments 9
Tags: Visual Art Blogs
The Stranger depends on your continuing support to provide articles like this one. In return, we pledge our ongoing commitment to truthful, progressive journalism and serving our community. So if you’re able, please consider a small recurring contribution. Thank you—you are appreciated!
CONTRIBUTE NOW