How Tacoma Art Museum Criticizes a Collection Without Angering the Donors

Tacoma Art Museum has just opened an entirely new wing devoted to a single collection of Western American art. Because the work presented is culturally problematic, the museum has taken the unusual step of commissioning a handful of Native American people to write labels responding to the art. What results in the galleries can be frustrating, but it also breaks open the complexity of what's really going on both in the art and in the institution of the museum in 2014. This first exhibition of the collection's highlights will be up for an entire year. The gala celebration happened Saturday night. The following dispatch is based on interviews with people who attended.

Shaun Peterson is an artist who currently lives in Portland but is from Puyallup. He's a Puyallup tribal member, and he's a father, and after everything was settled with the babysitter in Portland, he got on the road and drove the 144 miles to Tacoma for the gala.

Peterson arrived two hours late, but the party was still going. Cowboy hats and boots and Western regalia were everywhere. A very big man was wearing a fleece jacket printed with pictures of majestic wolves and eagles. The DJ was playing spaghetti western music. Families were sticking their heads through cutout holes in an old-timey stagecoach display to have their pictures taken in Ye Olde West. Earlier in the afternoon, an actual horse-drawn stagecoach had clomped down Pacific Avenue in honor of the new Haub Family Galleries at TAM.

At one point during the opening, Peterson noticed an older woman wearing an American flag shawl, the flag very distressed. Did that have some meaning? In this supremely civilized room full of cultures clashing, it was impossible to tell what things meant, who was being serious, who was enshrouded in self-conscious irony.

In the galleries, there are many, many depictions of Native Americans by European and Euro-American artists. Peterson identified only two other Native people in the crowd.

"I'm glad you said something about it," several people told Peterson at the opening. Peterson is an advisor to the museum's collections committee and has exhibited at the museum before. He's trying to work with a white institution while also acting in a movement of young Native Americans who don't want to be forced to choose between remaining silent or being seen as confrontational. He sees himself as diplomatic, he told me.

Here's what he'd said, his statement that made people thank him. It's quoted in a label hanging next to John Clymer's painting The Storyteller, from circa 1935:

This painting seems ambiguous, like it is not representing a particular culture. In European art, painters are generally informed by history. This solidifies people’s mindsets into thinking all art images are accurate. This is problematic when Native people are the subject of uninformed painters of Euro-American background. People prefer this fantasy of Native life which does not accurately reflect our culture. 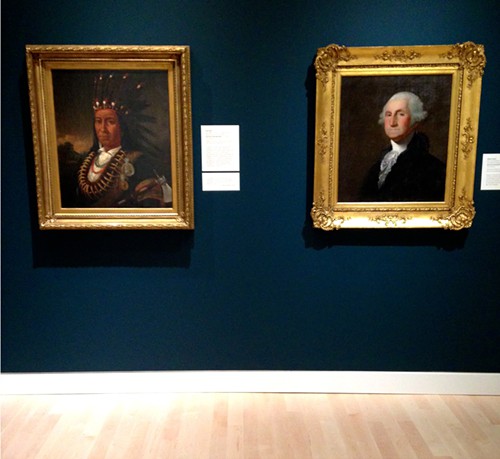 When you "go west," as it were, what kind of place do you end up in? The display of paintings and sculptures at TAM dates from the late 18th century—Gilbert Stuart's circa 1797 portrait of George Washington is here, paired with an 1851 portrait by Paul Kane of Ojibwe leader Maungwudaus—to today. It's the story of a fantasy almost entirely created by outsiders. Many of the artists are from Europe, and many never traveled to North America, to the settings of their pictures.

The French painter Rosa Bonheur based her scenes on what she saw in the backlot of Buffalo Bill's Wild West theme show when it visited Paris. Henry Merwin Shrady was one of the artists to resurrect the ancient art of lost-wax casting in the United States; he created his two-foot-tall bronze Elk Buffalo (The Monarch of the Plains) (ca. 1900), which is the first sculpture you see when you enter the Haub Galleries, based on the creatures at the Bronx Zoo. (The zoo buffalo, apparently, had very, very sleepy eyelids.)

The Haubs donated 295 works of art to Tacoma Art Museum, and asked the museum to build the collection a home. Voila!: Here is a wing of 16,000 square feet of galleries added to the museum's existing 50,000 square feet. The lobby is bigger, the exterior is transformed (there is much to say about the architectural transformation, and I will get to that in another post). First, who are these Haubs?

Erivan and Helga Haub are a German couple in their 80s; in 2005, the retailing family was 122 on the Forbes list of the world's richest people. Erivan and Helga live in Düsseldorf and have homes in Wyoming and near Gig Harbor outside Tacoma. Their Wyoming place is a bison ranch, the first painting they bought back in the 1980s is of a very cute obstinacy of bison, and TAM's rebooted cafe offers a Bison Bolognese and a bison-shaped sugar cookie.

The Haubs honeymooned near Tacoma decades ago, and they love the local lakes and mountain views. They are not as interested in the historical humans of this place—the canoe tribes; their collection contains more generic images of Plains-style Indians.

I haven't met the Haubs, but in a video at the entrance, Erivan Haub speaks about his childhood fascination with the popular writings of Karl May. May's noble-savage writings spread a romantic view of Plains-style Native Americans across German-speaking countries. It persists to this day, as Peterson discovered when he was speaking at Charles University in Prague in 2013 and students and staff didn't believe he was Native, "with my business casual appearance, short haircut, and messenger bag with laptop." Peterson elaborated. "Every man I met over 50 in Prague and in Vienna, every man I talked to who found out I was Native, was absolutely fascinated like a schoolboy. This was like Star Wars for that generation."

TAM has to walk a line with the Haub gift. The museum is grateful to its donors, yet openly critical of their collection's dominant perspective. It's easy to anticipate some of how people might react. Peterson is not surprised at the opening, for instance, when a retired doctor, a white man who's a regular patron and someone Peterson has talked to before, strikes up a conversation in which he just wants to know why Peterson's labels are so "confrontational" and "negative." Why isn't Peterson celebrating? It's a party! All art is fantasy anyway, so what's the big deal? 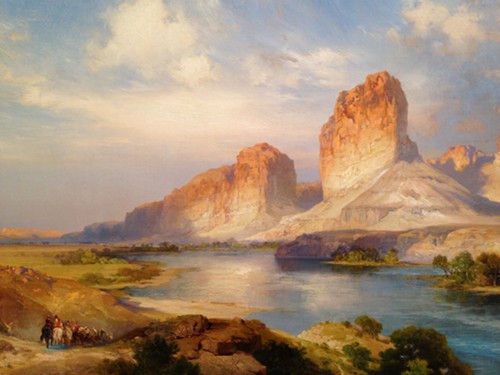 Anticipating this criticism, Peterson took a photo of his label on his cell phone in advance of the opening. He pulls it up so he can look over the exact words with the retired doctor. "What was it that seemed negative to you?" he asks the man, who has to admit he can't point to anything he finds negative.

"He smiled," Peterson says, "because he’s kind of like 'Oh, yeah,' he’s kind of catching himself. We're both sort of in agreeance that people are reacting from their feelings rather than to what’s really being said. They're having that feeling of, 'You’re not with me in this, you’re not celebrating like I am,' so they feel kind of hurt. I’m like, well, I’m not condemning anything, but they asked me what I thought, and I have to be honest about it, and I think that is important."

Labels like this open whole warehouses of worm cans. Imagine the Louvre with labels representing the people and places left out of the paintings. With the exception of the greatest of the paintings, the ones that can sustain all kinds of deconstructions and extended critical lookings, the problems would drown out the pictures.

"Our goal is not to be the encyclopedic collection of Western American art—there are other institutions and collections that have a head start on that—but our goal is to tell the story of who we are [as Westerners] and how we got here," is how TAM chief curator Rock Hushka explains the museum's bigger vision for integrating the Haub wing. 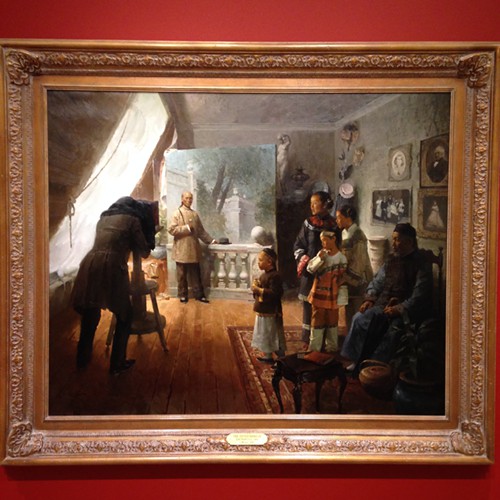 Yes, but once you get started, where would you ever stop?

"That’s the fun part of our job," Hushka says. "I’m serious. That’s exactly the enormity of the task facing us, and to do it well and to teach ourselves to do it better. That’s where the bar is set."

On the flip side, do the labels make much difference at all when the paintings themselves are still the prizes on the walls? Plenty of people skip labels entirely.

How will TAM know if the labels are doing what they're supposed to? Hushka says that will be determined by listening in on school groups, by soliciting visitor feedback, and by seeing whether the museum is able to build its relationships with Native American scholars and tribes. If TAM has strong ties with those groups, then something is going right. The collection needs adding to, and it needs to be researched, he says.

Asia Tail, Cherokee, works at TAM as the second Haub Fellow. It's the job of the Haub Fellows to research the collection, and Tail headed up getting the Native testimonials for the labels in this first year's exhibition. Tail interviewed Peterson and others by phone, and asked further questions over e-mail. Their responses were excerpted and edited for spelling and punctuation but not for content, then approved by each speaker.

The labels are distracting. Occasionally they undermine the work they comment on. Sometimes you wonder why this painting is on the wall at all if it's so questionable, especially when it's cheesy. (There are grand pictures here, and there are also some pieces of kitsch.)

But the labels cast a mirror in front of the art, often a mirror held by somebody who's supposedly being represented in the art itself. You don't have to look into that mirror if you don't want to. 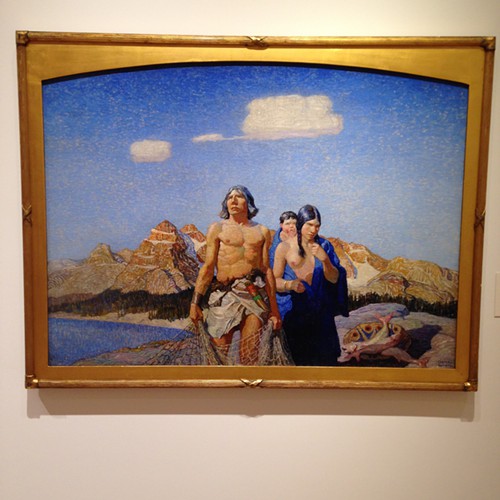 In adding these labels, TAM sacrifices some of its so-called authority. It sounds like a deeply embarrassed white person talking awkwardly about race. There are pros and cons to this approach; the printed words could, for instance, become a paltry substitute for honest-to-god material and structural changes to the still-white, still-mainstream museum. But for now, the labels are like listening in on two people trying to sustain a difficult conversation.

Peterson said he spent a long time looking at Junius Brutus Stearns's 1851 portrait of the meeting where Shawnee leader Tecumseh delivered a famous protest speech to Indiana Territory governor (and later US president) William Henry Harrison. But the speech happened in 1810. Tecumseh died in 1813. The painting is a sentimental throwback to a cause already lost, land already taken. He said it's "hard to describe" how it feels walking through the Haub wing. 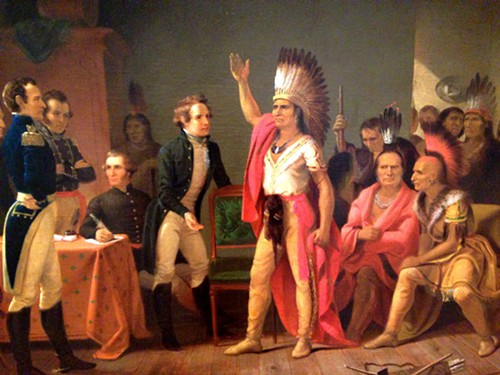 Jason Lujan, Chiricahua Apache, explains his reaction to the art in his label, which hangs between the labels for a beefcake noble-savage painting from 1854 by the German Carl Ferdinand Wimar and Albert Bierstadt's excessively tranquil Departure of an Indian War Party from 1865. Lujan's writing turns out to be a way to think about the entire Haub wing enterprise:

Right now, somewhere in the world, someone is representing you and speaking for you without you knowing about it. This is the case for everyone, at any time, from individuals to large groups and communities. The historical paintings you are presenting do a very good job of pointing this fact out, which is why they remain relevant.

Comments 10
Tags: Visual Art Blogs
The Stranger depends on your continuing support to provide articles like this one. In return, we pledge our ongoing commitment to truthful, progressive journalism and serving our community. So if you’re able, please consider a small recurring contribution. Thank you—you are appreciated!
CONTRIBUTE NOW