"Are the monkeys going away?" asked an older woman in a business suit and a hurry, on her way out the front door of Seattle's tallest skyscraper Wednesday. "I hate them."

The "monkeys" are not actually monkeys, or even sculptures of monkeys, they are small orange resin sculptures of humans, without heads, climbing steel ladders. They are—or they were—a site-specific installation made in 2005 by Seattle artist Dan Webb.

The art handlers were hired by the company that now owns the building, Beacon Capital. Beacon has owned the building since 2007, said spokesman Alex Fryer, but are only now "just going through the building and freshening up some interior spaces." That means the removal not only of Webb's installation, called Heads Up, but also a large abstract sculpture by Portland artist Christine Bourdette, Bloom Cycle, that was commissioned at the same time. Those were the only two artworks owned by the building's owners. They'll be replaced, said Beacon spokesman Alex Fryer, not by art but by "kind of a light sculpture" from New York design firm ESI.

What prompted the removal? "I honestly don't know the process of how those decisions are made," Fryer told me. He didn't have any pictures or descriptions of what the new piece will look like. Anne Strauss of New York, Beacon's art consultant on the project, didn't respond to requests for an interview. Beacon is simply "updating and modernizing Columbia Center's common areas and food court," according to Fryer. The new design will be installed in January. 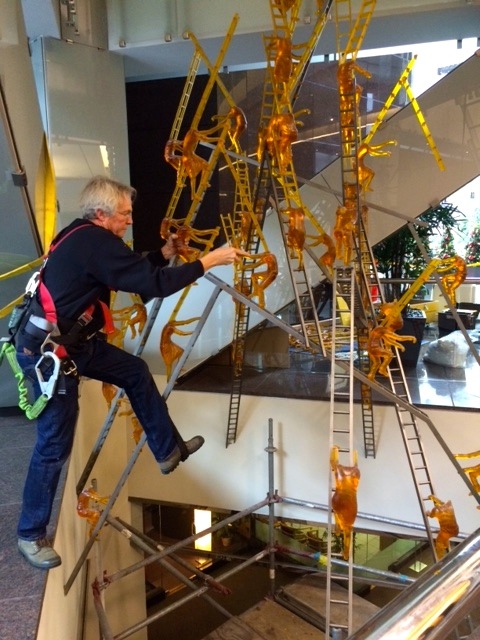 Webb's piece was polarizing. Minutes after the monkey-hater walked out the door Wednesday, an older man in a business suit named Gary Miles walked in. He saw the ladders and resin people lying in pieces on the lobby floor, about to be hauled away back to the artist's studio in Georgetown, and described an emotional connection.

"I don't love the aesthetic, but I like the symbolism," Miles said. He sounded sad as he explained, "Look at those ladders. The ladders end. There are glass ceilings. It shows how people reach a point where they have to move somewhere else to get any farther along."

An optician named Anna Sim told me she thought Webb's piece was "tasteless" and Bourdette's piece "too dry." "Come on," Sim said, "we need more color, more warmth, more fun in this place." An accountant named Erik Levy liked Webb's piece so much he wanted to take it home and install it for the enjoyment of his whole family, especially his kids. "I love the ladder men," Levy said.

What happens to the art next? Heads Up is already back with Webb. He'll either refashion its parts into new, smaller pieces, or seek a public site for it as a whole, said his dealer, Greg Kucera of Greg Kucera Gallery. Webb didn't respond to a request to talk about it but Kucera said this was "not traumatic" for Webb and that Beacon had been "gracious." Bourdette also did not respond to a request to talk, but her dealer, Daniel Peabody at Elizabeth Leach Gallery in Portland, said Beacon has "been generous beyond what's in the contract" and would like to donate the piece to a museum to receive a tax credit. Peabody said three museums in Washington and Oregon have expressed interest. How does the artist feel? "The preference would be that it stays at the site it was designed for," Peabody said, "but as long as it finds a good home..."

"They're not doing anything illegal," said Cath Brunner, public art specialist at the King County art agency 4Culture. Back in 2004 and 2005, 4Culture was the consultant on these commissions at Columbia Center. The property owner back then was Equity Office. For whatever reason, Equity wanted original art by Northwest artists in its lobby, and was willing to pay for it. Equity contracted with 4Culture to assemble a team of three curators, from Portland, Vancouver, B.C., and Seattle, and a panel plus the curators selected Webb and Bourdette. When Equity sold the building to Beacon, the art went with it.

"It’s an emotional issue, I think, as well as a legal one," Brunner of 4Culture said. "I think the artists certainly will accept the fact that the pieces have to be removed, but for both of them it was a significant piece in their portfolio. For Dan [Webb], it was his first public work. It was in a prominent building. ... For me, I always think of these public art commissions—both the good ones and the ones that aren’t so successful—as part of the fabric of the history of the city, as documenting time in the cultural community. They mark those eras of artists' thinking, and building owners’ thinking about putting art in their buildings. I understand that they have the right to move on, but I like that history." 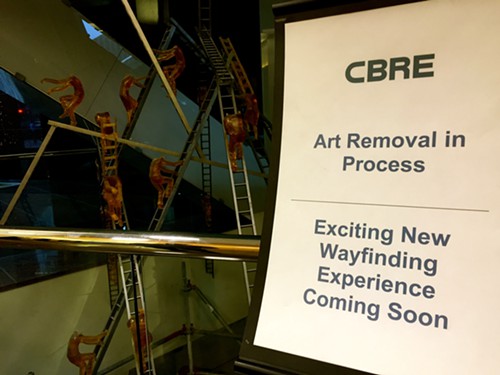 The situation is a little sorrier for Webb's piece than for Bourdette's. His climbing installation was not only physically suited to the tower's multi-story lobby, but also about corporate America. It was made to be met by lovers and haters in business suits.

In the end, we will probably never know why Equity wanted Northwest art, and these artworks in particular, or why Beacon doesn't. But the episode gives us a little look at two very different ways that the private owners of prominent buildings can make decisions about art. Whatever does a corporation want?

Comments 7
Tags: Visual Art Blogs
The Stranger depends on your continuing support to provide articles like this one. In return, we pledge our ongoing commitment to truthful, progressive journalism and serving our community. So if you’re able, please consider a small recurring contribution. Thank you—you are appreciated!
CONTRIBUTE NOW