A sense of humor that's pointed and anarchic at the same time.


For the first time in her life, Dawn Cerny, palpably anxious, was sitting onstage at a table with a glass of water like a regular Spalding Gray. This was earlier this year at On the Boards. She was trying an entirely new medium. Nobody knew what to expect.

She tried to start by saying hello, but her mouth wrestled with the words. Syllables bloomed and distended. A repulsively low voice issued "Hullooooo," followed by a chirpy "Hi!" and then a whimpering "Hiii?" We were watching someone birth new ways of introducing herself, someone with an identity in flux. Cerny had a son a few years ago, and her 40-minute performance linked the abstract and the personal, from theories about infant object attachment to the near-mortally raw state of her body after giving birth. She occasionally, uncomfortably, rang a bell. It was partly a brilliant scripted monologue and partly a palsied dance with language.

For a decade, Cerny has made prints, paintings, and sculptures that derive power from the exhilaration of vulnerability and ambition combined. Cerny graduated from the Cornish College of the Arts, where she is now on the faculty, and went on to a master's degree at Bard, and her work is literary, historical, and political. It's also messy, pulpy, direct, and poetically profound. Oh, and it's funny.

So it's apt to stab you in a few places. A drawing she exhibited at SEASON in 2011 was a quartet of blue hands sketched in colored pencil, positioned ambiguously—letting go? Mid-grab? A slogan plastered over the hands said, in gold glitter cursive, "Get a bigger rape whistle." For an earlier exhibition at Henry Art Gallery, she printed an army of tiny paper soldiers and set them up in a miniature reenactment on the floor. (It was 2008, and her brother was training to go to war.) Near the battlefield, there was another area, an actual waiting area where you could sit with magazines and books and tissues. The show was called We're All Going to Die (Except for You). 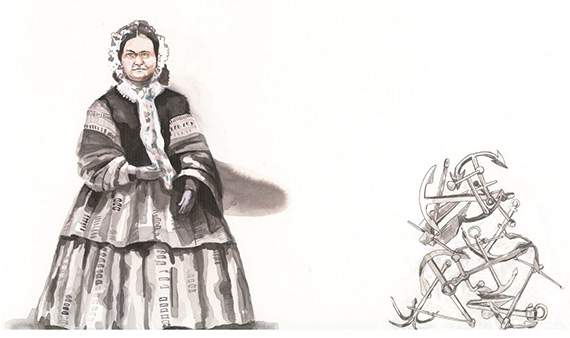 When she covered Gallery4Culture's walls with a ballpoint-pen mural depicting a huge dogfight, she layered the mural on top of "another" show: her pink-and-gold versions of the portraits of European royals in art-auction catalogs. A dog's giant claws would extend into a frame and flex next to the delicately painted, bewigged head of a cluelessly serene nobleman. Cerny's sense of humor manages, somehow, to be pointed and anarchic at once.

At the same time, her art has an irresistible warmth. In 2013, in a solo exhibition called Boys, Jokes, and Things at SEASON, Cerny offered blankets. A dozen prints each depicted a blanket in a wrinkly heap in two tones. The layered patterns acted as camouflage, in case you needed a place to hide. Once again, her art was conspiratorial, as if to say, just look at this world and tell me you don't want to cry and vomit and yell and laugh at the same time, too.

Tags: Visual Art Features
The Stranger depends on your continuing support to provide articles like this one. In return, we pledge our ongoing commitment to truthful, progressive journalism and serving our community. So if you’re able, please consider a small recurring contribution. Thank you—you are appreciated!
CONTRIBUTE NOW