Her series Life on the Sidelines is spectacular. Kelly O / lettering Mike Force

On the sidelines, often.

What it was like among the students behind the Velvet Revolution.


One way to describe Czech-born Klara Glosova is that she is the inventor and organizer of some of the most popular art spectacles to happen in Seattle in the last five years. Her NEPO House exhibitions and her annual NEPO 5K Don't Run parade have drawn hundreds of people around her. When she appeared on the Seattle scene six years ago, she zoomed to immediate prominence, and everything she's accomplished since has been infused with the DIY ethic she learned on the streets of Prague during the Velvet Revolution in 1989, when she helped to put out a makeshift student newspaper so that people outside the city—particularly in her home of Brno—could understand how, exactly, the government was being overthrown.

Another way to describe Klara Glosova is that she does a lot of laundry. She has two teenage sons, and they play a lot of soccer. She washes, she folds, it keeps coming. She loses entire days on the sidelines, small-talking and waiting for something to happen, with all the other parents. Probably very few of these people know about the other Klara Glosova, the one who's a leading light.

Glosova has always made art out of her everyday. NEPO House, which is just "open" spelled backward, was four group exhibitions in 2009 and 2010. Work by dozens of artists in photography, painting, sculpture, video, performance, installation, and stop-motion animation colonized the Glosova family's Beacon Hill home. There was art in the shower and the recycling bin. There was art on the bed pillows in the master bedroom. It was a party, but there was also always something there you needed to see.

In her own work, Glosova sculpts household objects in ceramic. She makes perfect trompe l'oeil sculptures of folded shirts or kitchen towels in a pile, or dirty underwear or socks thrown on the floor, displayed on the floor. Who's going to pick that up? they seem to say. On the surface they are charming and playful, replicating the details of the originals down to their stitching, but they also carry in them the long, solitary mental stretches that were involved both in the making of the art and the upkeep of the house. 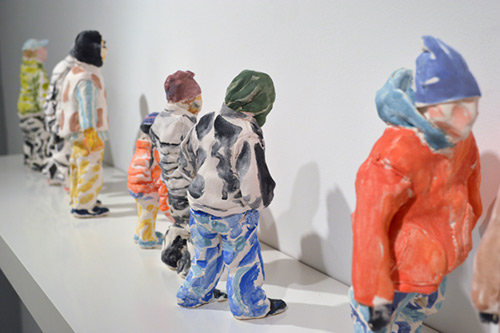 sculptures from Life on the Sidelines at Bryan Ohno Gallery.

Recently, Glosova finished a series of huge and fairly spectacular watercolors on paper called Life on the Sidelines (one was recently acquired by Seattle Art Museum). The Life on the Sidelines paintings depict, over and over, a row of parents standing on the sidelines of an athletic field. The scenes are resplendently colored, and repetitive as hell. The parents cast long shadows, and nothing is happening on the field. You never see faces, only backs.

This August will be the fifth and last time Glosova puts on NEPO 5K Don't Run, an art scavenger hunt that takes place every summer on a route from the International District to Beacon Hill. Like NEPO House, from one work to the next it can range from goofy to vital. Five years is a good time to end it, Glosova says, without a hint of rue.

When I called her one recent afternoon to ask her a question about her work, she was at Sea-Tac International Airport. Turns out she was showing her watercolors there. Who knew? There was no grand announcement about it. The travelers were streaming by, rolly bags perilously close to her paintings. She was taking down the paintings, and they were laid out on the floor for the moment. Picking up her phone in the middle of the crowded terminal, Glosova was on the floor with her paintings, working at ground level, where she always is.

Tags: Visual Art Features
The Stranger depends on your continuing support to provide articles like this one. In return, we pledge our ongoing commitment to truthful, progressive journalism and serving our community. So if you’re able, please consider a small recurring contribution. Thank you—you are appreciated!
CONTRIBUTE NOW