Currently Hanging: The Bloody Church of Martin Wong, Only on View for a Short Time 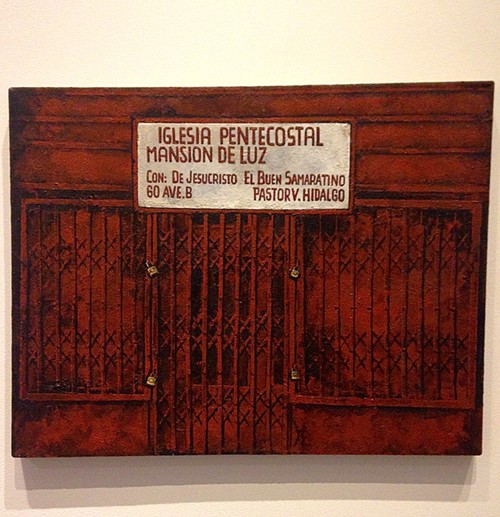 At Tacoma Art Museum now: Martin Wong, Iglesia Pentecostal Mansion de Luz (1985), acrylic on canvas, 28 by 36 inches. Wong was born in Portland, Oregon, in 1946, and died in San Francisco in 1999. Courtesy of the Estate of Martin Wong and P.P.O.W. Gallery, New York

Pentecostals believe there are many sinners in the world, and many of them are possessed by demons. Those demons have to be cast out before the sinners can be accepted into the clean church, into the light of day. Among many other sins, it is a sin to be gay, and a sin to use drugs.

This Chinese American painter, Martin Wong, dipped the shadowy facade of a Pentecostal church in blood. He did it in 1985, four years after AIDS appeared, the year the FDA licensed the first commercial blood test to detect antibodies to HIV, the year Rock Hudson died of AIDS, the year President Reagan mentioned AIDS publicly for the first time, the year the U.S. military started blood-testing all recruits to reject those with HIV.

It was nine years before Wong would discover he was HIV-positive and thirteen years before he would die of AIDS-related causes at his parents' house in San Francisco. He'd lived vividly, as a painter, performer, and a force in New York's Lower East Side in the 1980s. You could spot him because he was the long-haired one in the cowboy hat with the handlebar mustache. He collected so much graffiti art that he donated 300 works of it to the collection of the Museum of the City of New York. 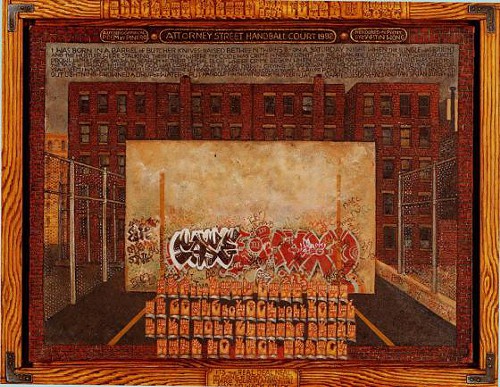 This is one of Martin Wong's remarkable sign-language paintings. It's called Attorney Street, Handball Court with Autobiographical Poem by Piñero, and he made it between 1982 and 1984. Miguel Piñero, the playwright and actor who was co-founder of the Nuyorican Poets Café, was also Wong's love and collaborator. Courtesy of the Estate of Martin Wong and P.P.O.W. Gallery, New York

He chooses a painfully close view, pressing up to a church that will not be letting anyone in. The modest handwriting on the sign is misleadingly inviting. It promises that there's a Good Samaritan in there, and light, an escape from the immediate emergency of this horror-film red.

But the handwritten sign also sits at the head of a cross with locked gates for arms. Pairs of Xes mark the gates like so many cartoon dead eyes. The whole painting is white, red, and black except for the four little gold locks, baubles of public jewelry and instruments of torture. 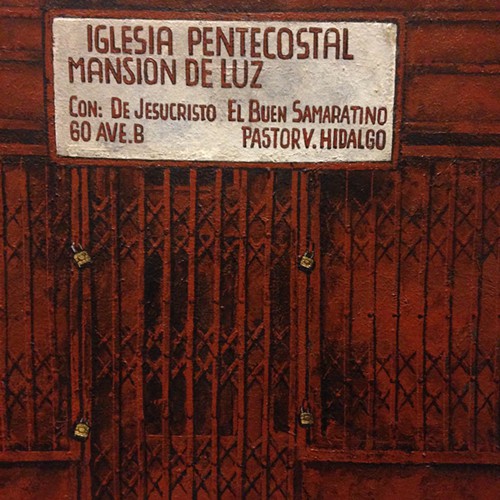 Even closer, still no way in. Courtesy of the Estate of Martin Wong and P.P.O.W. Gallery, New York

Wong's church painting is cold and hot, quiet and unquiet. Its meaning is plain but could be plausibly denied. Here Wong fits the description put forth by Art AIDS America that many of the artists included in the exhibition changed the face of American art by smuggling content into museums in conservative packages. Wong mixes low-art-innocent-folk lettering with hard, high-minimalistic geometry, for a result as passably impersonal as Andy Warhol's Red Disaster from 1963, a red-stained grid repeating the gruesomely detached news-media photograph of an electric chair; yet seething with the kind of provocation Andres Serrano proposed in his photograph of a crucifix dipped in his own fiery piss in 1987. The difference is HIV. HIV wasn't around in Warhol's 1960s. HIV is not transmitted through urine. But Wong makes no direct reference to it.

When Art AIDS America travels to New York, Atlanta, and Chicago, the exhibition will not include this painting—it's on loan from the artist's estate and P.P.O.W. Gallery in New York for Tacoma only. Try to stand face to face with it while you can.

Wong's work (a trove of images here) is experiencing a resurgence this year, in two solo exhibitions in Oakland and the Bronx (opening November 5), and because Julie Ault pulled his work into the Whitney Biennial in 2014. At the biennial, Ault placed Wong's works alongside his contemporary, David Wojnarowicz. Both men are gone.

Wong's painting Untitled (Silver Storefront), also from 1985. Courtesy of the Estate of Martin Wong and P.P.O.W. Gallery, New York
Comments 1
Tags: Visual Art Blogs
The Stranger depends on your continuing support to provide articles like this one. In return, we pledge our ongoing commitment to truthful, progressive journalism and serving our community. So if you’re able, please consider a small recurring contribution. Thank you—you are appreciated!
CONTRIBUTE NOW