Galleries, Museums and More Places to see Visual Art Around the City 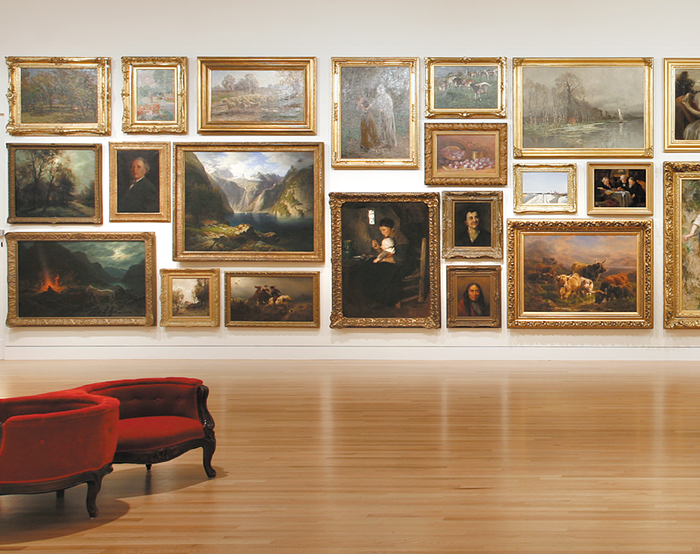 Seattle has a reputation for a lot of things—a growing tech scene, an abiding obsession with coffee, and of course a love of the outdoors that can weather even the rainiest of winters. But Seattle is also teeming with visual art, if you know where to look. From major institutions like Seattle Art Museum to pop-up galleries inside studio apartments, there's always something new to see—and somewhere new to see it. Here are a handful of the best places to see visual art right now so you can start exploring like a local.

Founded in 1952 to house the painting collection of longtime Seattle residents Charles and Emma Frye, the Frye Art Museum has evolved into one of the city's most innovative venues, featuring exhibitions of cutting-edge contemporary art alongside historical surveys of early graphic design, obscure 19th-century symbolists, and other smart, unexpected shows you won't see anywhere else. The Frye also consistently champions the work of outstanding local artists—many Stranger Genius Award winners have exhibited at the museum. It's Seattle's only private museum of its kind, and it's always free, making it a great place to take families and out-of-town visitors who want a taste of local culture.

PRO TIP: Although the Frye's events tend to be free, they also run out of tickets quickly. Sign up for their mailing list to find out about upcoming events you don't want to miss.

Situated on the University of Washington campus, the Henry is Seattle's designated contemporary art museum, with a mission to function as a laboratory for creative thinking and new ideas. The building itself is a piece of art history: The original galleries opened in 1927, making the Henry the oldest museum in Washington State. In 1997, the building was expanded to its current size, resulting in a fascinating architectural contrast that's always in dialogue with the art it houses. In 2003, the Henry became the permanent home to James Turrell's Skyspace, a wooden room for contemplation and reflection that opens onto the sky.

There are too many galleries in Pioneer Square to list, but many of them are concentrated in and around the Tashiro-Kaplan Building. The T-K is home to SOIL, Gallery 4Culture, CoCA, Party Hat, and more, as well as dozens of artist studios and even artist housing. Recently, it’s also become a literary hub with the addition of X Y Z—the exciting new suite of galleries and independent publishers that encompasses Mount Analogue, Cold Cube Press, Gramma Poetry, and Specialist—as well as occult bookstore/gallery Mortlake & Company.

PRO TIP: Visit Pioneer Square on First Thursdays for the city’s largest art walk—which also happens to be the longest-running art walk in the United States!

Seattle's Central District is ground zero for gentrification. In the 20th century, the CD became home to much of the city's African American population as a result of a racist housing policy known as redlining. Surging rents and sky-high property values are quickly changing the face of the neighborhood, but the Northwest African American Museum is an institution steadfastly devoted to preserving the region's rich Black artistic heritage in the heart of the Central District. Housed in a gorgeous former elementary school and surrounded by public parks, NAAM is the Northwest's premier destination to see works by artists like Jacob Lawrence, James Washington Jr., Barbara Earl Thomas, and C. Davida Ingram.

PRO TIP: Make a day of it by dining at one of the neighborhood's many Ethiopian or Somali cafes after your visit.

It's hard to keep Seattleites inside on a sunny day, so fortunately there are places to see art outdoors. Before this nine-acre waterfront sculpture park was downtown Seattle's largest green space, it spent several decades as an industrial fuel-storage facility. Now fully rehabilitated into an ecosystem of native plants and sustainable design, Seattle Art Museum's Olympic Sculpture Park is currently home to more than 20 pieces of monumental sculpture, bike paths, and also has an amphitheater for outdoor events. Iconic works include Eagle, the bright-red Alexander Calder sculpture visible in many photographs of Seattle's skyline, and Richard Serra's Wake, a towering array of curved steel forms created using a machine that once produced nuclear submarines. It's the perfect place for a family picnic, a first date, or even a wedding reception.

PRO TIP: Familiarize yourself with the layout online before heading in—there's lots to see, and much of it's tucked away, like Beverly Pepper's quietly magnificent Persephone Unbound, which is so subtle, it could almost be mistaken for part of the architecture.

Visible from 12th Avenue via 90 feet of plate-glass windows, the Hedreen Gallery also functions as the entryway for Seattle University’s Lee Center for the Arts. Its central location and thoughtful programming make it the perfect gathering place for conversations about the role of art in public life. Curator Molly Mac’s plans for 2018 include implementing a High Resolution Moving Image Artist Residency Program, which creates opportunities for installation and video artists to engage with Seattle’s vibrant and constantly evolving arts community.

Pro tip: Visit during the Capitol Hill Art Walk on the Second Thursday of every month for opening receptions and parties all over the neighborhood.

The Wing Luke Museum of the Asian Pacific American Experience is more than an art museum, although you can often find art here. It's a living history museum filled with artifacts and objects that tell stories of Asian Pacific American experiences in Seattle, from the Chinese immigrants who began arriving in the 1850s to the diverse communities that thrive here today. The Wing is located in the heart of Seattle's International District, with historic neighborhood tours happening almost every day.

PRO TIP: The best Asian food in Seattle can be found in this neighborhood. Come hungry, leave inspired.

Between Via Tribunali and Hitchcock Deli on 12th Avenue South in Georgetown lies a staircase. If it weren't for the signs on the sidewalk, it would be easy to miss the fact that three of the city's most innovative contemporary art spaces are located on the second floor. Interstitial is a new-media gallery that houses interactive video installations, virtual-reality experiences, and other forms of adventurous multimedia art (though it's closing for good on July 1), while Bridge Productions is a commercial gallery that represents a roster of artists and aims to make art accessible and affordable for new collectors. Finally, the Alice is an artist-run space whose exhibitions tend toward the experimental, often tackling economic or social-justice issues with a refreshing dose of down-to-earth humor. Together, these three spaces help make downtown Georgetown one of Seattle's most essential destinations for contemporary art.

No list of local art venues would be complete without a mention of the region's largest institution devoted to art in all its forms. Compared with older, wealthier museums, Seattle Art Museum might not have the most famous works from art history textbooks, but it has work by a whole lot of artists whose names you're likely to recognize, and many more you'll be excited to learn. It also has whole rooms devoted to First Nations art, African art, the ancient Mediterranean, and a handful of contemporary aboriginal Australian paintings that are a must-see. A compelling program of temporary exhibitions and ongoing roster of community events—many of them kid-friendly—gives you reasons to keep coming back long after you've exhausted the permanent collection. (SAM's sister museum, the Seattle Asian Art Museum in Volunteer Park, is closed for renovation through September 2019.)

PRO TIP: SAM's lobby, which currently houses a large-scale sculpture by Northwest luminary John Grade, is free and open to the public—and has free wi-fi. Perfect for the visitor on the go!

More Museums To Check Out

Tags: Visual Art Visitor's Guide
The Stranger depends on your continuing support to provide articles like this one. In return, we pledge our ongoing commitment to truthful, progressive journalism and serving our community. So if you’re able, please consider a small recurring contribution. Thank you—you are appreciated!
CONTRIBUTE NOW