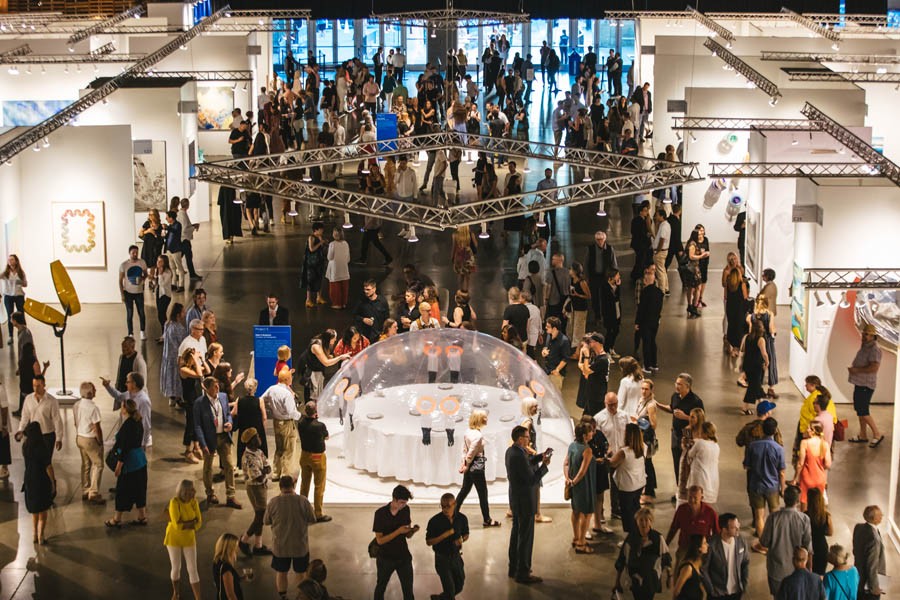 After a two-year pandemic hiatus, Seattle Art Fair (SAF) is finally back at Lumen Field Event Center. The fair—now in its sixth year—will run from July 21-24. You don't have to be Daddy Warbucks to enjoy the fair. It's usually an opportunity to get a sense of what's going on in the art world at large, kind of like elevated window shopping.

As with previous iterations, there's A LOT of art, installations, and public programming to sort through. 85 local, national and international galleries will present works for curious art lovers to gawk at as they rove around the cavernous, air-conditioned space. While there is no one theme that binds everything together, this fair's programmatic focus is overwhelmingly on Seattle-based artists and art.

"The art fair in and of itself is featuring a lot more local producers," said Nato Thompson, SAF artistic director. "The ability of a neighborhood and a cultural community to even see each other across the room has [more] profound new relevance today than it did in 2019."

This emphasis on local artists comes as the fair finds itself in a new era. It is the first without the involvement of the late Paul Allen's Vulcan and their Arts + Entertainment division. Founded by Allen in 2015, Seattle Art Fair had been one of the major enterprises put on by the company—but following his death in 2018, many wondered about the fair's fate and appeal for blue-chip galleries. After the 2019 edition of the fair, Vulcan decided to shutter its art division in mid-2020 and longtime SAF co-sponsor, Art Market Productions (AMP), took over as sole organizer of the event.

"I think it's felt correct for everyone, including my colleagues over at Vulcan, because we have been the shepherd of the fair from the beginning," said Kelly Freeman, AMP fair director who also puts on art events in places like San Francisco, The Hamptons, and New York City.

Despite the locally-focused curation, the installations and public programming featuring out-of-town artists are baller. Vancouver-based Fazakas Gallery will bring "Atlakim," a work by Alan Hunt (Kwakwaka’wakw and Tlingit), Cole Speck (Kwakwaka’wakw), and Aubrey Johnston Jr. (Haida, 'Namgis and Ma'amtagila Nations) that features 15 masks representing The Atłak’ima (Atłak’im), a.k.a. The Dance of the Forest Spirits from the Indigenous Kwakwaka’wakw people of the Pacific Northwest Coast. The dance tells the story of a young boy lost in the forest who is visited by forest spirits that impart virtues upon him.

Up from Mexico City is Miguel Calderón. Kurimanzutto Gallery will present Calderón's "Motel 6," a huge Motel 6 sign sculpture that the artist will live inside for the duration of the show, roaming around the event center and subsisting off wine and cheese snacks or whatever food the fair offers. It remains to be seen whether security will take issue with an artist plopping down and making the cold Lumen Field his home for several days, but I guess that's the crux of the piece. Most excitingly, theeeeeee Carrie Mae Weems will be in attendance as SAF's distinguished guest, giving an artist talk on her highly influential body of work, including photography, text, video, audio, fabric, and digital images. For the past 30 years, Weems has been ahead of the curve in exploring contemporary American life, centering Black women in her pieces which dissect race, class, gender, family, history, and systems of power.

Locally, there's a lot to look forward to. Georgetown's studio e gallery is presenting works from their incredible roster of artists like Gillian Theobald's vibrant, humid paintings and Emily Counts' fantastical ceramic and stoneware creations. When I saw Counts' show last year, I remember being bowled over by her attention to detail and the way her sculptures contain so much life. Often, Counts' work incorporates glass, lightbulbs, and mirrors, which makes for a whimsical viewing experience. Never has beige looked so radiant than in her hands!

Scene mainstay Traver Gallery will also post up at the fair, bringing their cadre of excellent artists with them. California-based Jane Rosen will show her serenely smooth glass and stone sculptures of birds and abstracted bodies. You'll also get a chance to peep Naoko Morisawa's dazzling, colorful mosaics composed of oil stained wood and washi paper cut so finely they look like thread. Majorly, Traver will also present an installation by Seattle's preeminent glass artist Preston Singletary (Tlingit). His work is a nearly nine-foot-tall crystal totem pole called "KILLER WHALE TOTEM." The sculpture is the "largest ever created in this manner" according to his artist statement, and includes family crest symbols. More from his statement:

So much of the art landscape has changed since the last edition of the fair. Most notably, NFTs have wriggled their way into the market and are seemingly here to stay. As such, Seattle NFT Museum will have a booth at SAF, with its co-founder Peter Hamilton leading a panel discussion on NFTs and the digital art world. NFTs aren't "something to turn away from," said SAF artistic director Thompson. "The more voices that there are in the conversation, the better." Perhaps their panel will be a bit more enlightening than the text-on-the-wall approach they took at their physical museum.

There's so much more! Greg Kucera Gallery will present Humaira Abid's "THIS WORLD IS BEAUTIFUL, AND DANGEROUS TOO," which is composed of miniature paintings and wood sculptures. Inye Wokoma, co-founder of the Central District's Wa Na Wari, will show his "Separation Census," which explores the "complicated intersection between personal narratives and our political economy" through digital storytelling and collage.

Winston Wachter's Peter Gronquist will install "communion," a massive pool of water that will bring nature into the wholly unnatural Lumen Field Event Center. And 2015 Stranger Genius Award nominee Clyde Petersen's "As the twig is bent, so is the tree inclined" is a giant-ass and gorgeously-rendered tree cross-section made of recycled cardboard and lumber. Each tree ring imparts pieces of Petersen's personal history, choices, traumas, and life-altering moments.

When you're in the moment, it's easy to get caught up in the sights and sounds (and smells?) curated by the dozens of galleries at the fair. However, SAF organizers also see it as a great moment of being together after two years apart. "The fair is an opportunity for the city of Seattle to be in conversation with the national and international," said Thompson, "but also itself."

2022 Seattle Art Fair runs from July 21-24 at Lumen Field Event Center. Tickets start at $25. Get the full run down of exhibitors and events here.