Paintings of Syria and Lebanon, hidden gardens, sculptures of bread cast in bronze.

Raising her hand at art talks to ask hard questions.


Mary Ann Peters has been creating sophisticated abstract watercolors on the soft, smooth surfaces of clay-coated panels for decades. She could have continued doing that into the sunset, encoding her subject matter—her family's homeland in Syria and Lebanon—by wrapping it in beautiful swirls and cascades of paint. She had good reasons for keeping her subjects partly obscured. First, the art world is only cyclically interested in anything unabashedly political, narrative, female, or minority. Would alluding too directly to Syria and Lebanon get Peters cast as "the Arab American artist"?

But there was another problem, too, a more internal one. Peters, who graduated from the University of Washington with her master's in fine arts in 1977, was not able to travel to her family's homeland—ever—until 2012. What compelled her also eluded her. How do you make imagery of what you don't know and can't see?

Peters's North Star has been a piece of paper she keeps tucked away at home. It's an old family letter she inherited, written to her father by his father. When the younger man was leaving Syria to go to Yale and Eurocentric America, the older man gave his advice in the form of a request: "I know it's difficult, but please find the Syrian boys." Find your people. Don't lose us. That way, you won't lose yourself. 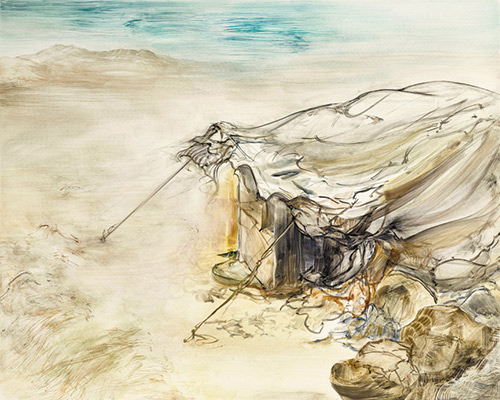 Taking her cue from that request, Peters set out in 2012 to do the reverse of her father's journey and make her first visit to her family's homeland. When she finally saw it up close, she grasped how far away those Syrian lives she's chasing in her work really are from her own, regardless of their incontrovertible link. The realization opened her up to experimentation, and released her from the implied task of forced empathy, yielding pieces that are more confident even as they're less knowing.

Early this year, she showed a breakthrough body of work in new mediums and new approaches. There were small, intimate paintings based on photographs taken from the internet (ranging from pictures of war to placid, mystical landscapes), capturing that duality of being close but not being there. There were cast-bronze pita pockets, the food burned away in the casting process, pitas now both bread and bronze, delicate and unbreakable, here and gone. There was a large, mesmerizing installation of a hidden garden, and a woven tapestry based on an old satirical cartoon. And still there were those classic, dust-stormy abstracts, which demonstrate yet again that Peters is, as has been obvious for a very long time, one hell of a painter. From here, she could do anything.