The Most Exotic Hash on the Market

What is Lebanese-style hash and why is it so hard to find here? 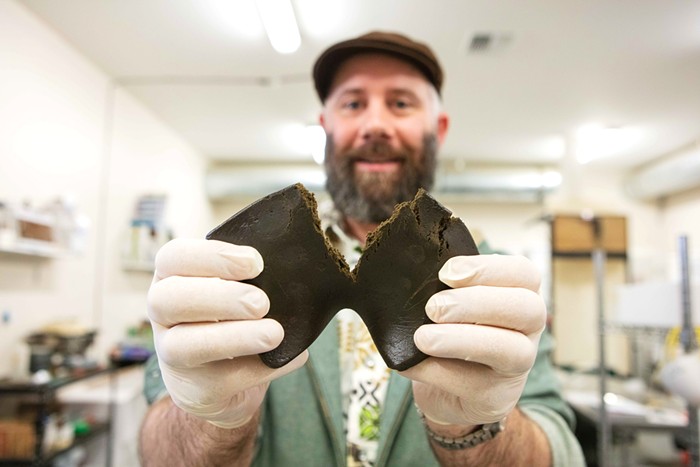 He is the only person at his company who knows how to make it. He produces it at night in a locked room. While he's in there, he puts a glove on the exterior door handle, warning other employees they are not welcome inside.

"We have a unique process that I came up with that is the best approximation, as far as I can tell, of how they make it in the Middle East," said Nicholas Saad, referring to his Lebanese-style hash.

I'd been looking for good hash locally for years, but it's nearly impossible to find in Washington's legal market, even though it's the most popular way to get high in places like Europe and the Middle East, places where it's easier to find than basic flower.

We have plenty of hash in this state, but it is essentially all American-style hash, which is runnier, lighter in color, and fundamentally different than what Saad is making.

"We get a lot of people from Europe and the Middle East. And when they see it, they freak out," Saad said.

He was giving me a tour of his pot-processing company, Sitka. He pulled out a dark, rectangular puck of hash from a box. He grabbed it with both hands and started to tear it down the middle—traditional hash is both pliable and stiff, like Play-Doh left to dry for too long. I was in a pot processing plant in North Seattle—but as soon I saw the chunk slowly ripping apart, I may as well have been in Morocco or Lebanon or Nepal.

Washington's pot processors just don't seem to know how to make traditional, old-world hash, which is why Saad protects his trade secret in a locked room with a glove on the door handle.

I'm just happy someone is making it. I have traveled the world enjoying hash's deep, earthy aroma and relaxing high. Smoking hash reminds me of getting high on rooftops above Moroccan markets, of puffing on bowls of the dark stuff in the Himalayas, of smoking mixed tobacco and hash spliffs in Portuguese jazz clubs.

While much of the allure for me is probably based on the romantic memories of getting high with strangers in faraway places, there is actually something unique in this pot product. When researchers in Europe studied the aromatic compounds found in hash, called terpenes, they discovered an entirely new compound, according to research published in the Journal of Chromatography in 2014.

"Most unexpectedly, we could demonstrate hashish samples as containing remarkable amounts of a rare and unusual monoterpene," the authors wrote.

The researchers named this new terpene hashishene, because it is not found in abundance in any other product in the world, not even pot. This is something entirely unique to traditional hash.

Sitka produces a few different versions of hash, all of which are rich and tasty. Lebanese Gold is a mix of sativa strains. Lebanese Red is a mix of indica strains. Cascade Cream is hash mixed with some CO2 extract to add more of a punch. They also produce one strain-specific hash (made from Blue Dream) and joints infused with hash (including a variety that is a normal joint wrapped in a shell of hash—it's crazy).

How do you smoke this exotic hash? Good question. Unlike the hash that you usually find in Washington stores, this stuff will not work well in your dab rig. The best way to smoke it is to roll it into a joint (or, even better, mix in some tobacco for a hash spliff) or roll a few balls on top of a bowl of pot.

Light it up, close your eyes, and you'll be sitting in the Himalayas. At least, I will.