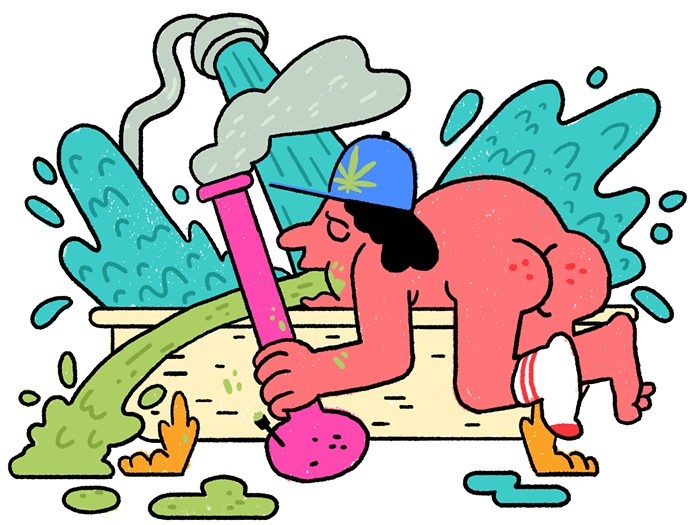 Forget being a gateway drug or sapping your motivation, the scariest thing smoking pot can cause is cannabinoid hyperemesis syndrome. This condition came to my attention after a reader wrote to us pleading that we not let the pot industry bury the news of this frightening syndrome.

If I had known about cannabinoid hyperemesis syndrome (CHS) all this time, I certainly would have told you sooner.

First described by Australian researchers in 2004, this condition is marked by near constant vomiting episodes and an uncontrollable urge to shower. The warm water of a bath or shower keeps the poor CHS-afflicted soul from continuing to vomit, so they spend their life in flux between retching and rinsing.

These folks continue to smoke pot, probably thinking it will alleviate their nausea. So it's a constant rotation between showering, throwing up, and smoking pot. It sounds terrifying.

A woman who suffered from the condition for 17 years told NPR that she would spend hours in a hot shower because it was the only thing that would stop the vomiting.

Doctors don't know how pot causes CHS, but there's little doubt that weed is the culprit. As soon as people stop smoking cannabis, the symptoms cease, according to Beatriz Carlini, an associate professor at the University of Washington Alcohol and Drug Abuse Institute.

"Just take cannabis out, and it stops immediately. So we don't know the mechanisms, but we know it is caused by cannabis," Carlini said.

There aren't any big studies about how the legalization of pot has affected CHS rates, but Carlini said there does appear to be an increase in reports of the syndrome. Carlini said CHS remains a rare disorder, even with pot legalization spreading across the country.

"It's not a public-health crisis or anything—but in the clinical arena, more and more doctors are seeing this. Although it's still relatively rare," Carlini said. "Mostly because of legalization, more people are using and probably more people are comfortable reporting it, and doctors are more aware of it."

There is strong evidence that pot has anti-nausea properties, so it's a conundrum to scientists as to why it appears to actually cause people suffering from CHS to throw up. This "paradoxical effect," as scientists refer to it, makes it more difficult for emergency room doctors to diagnose CHS, according to Carlini.

"If they know anything about cannabis, most likely they are going to know that it helps for nausea, so they are not going to connect the dots," Carlini said.

That paradoxical effect also makes it harder to convince people suffering from CHS to stop consuming cannabis, because they often think pot is helping them.

Carlini said CHS is such a rare condition that it doesn't warrant a big public-health awareness campaign. But she thinks the medical community should be aware of CHS so they can diagnose it, as should regular pot users.

"It's important to say something. If you look at the people who read The Stranger, a lot of them are habitual users, they use every day, so it would be important for them to know," Carlini told me.

So a word of warning: If you find yourself smoking pot every day, for years, and then eventually you end up vomiting and taking showers uncontrollably, you might be experiencing cannabinoid hyperemesis syndrome. And you should... stop smoking pot.