How One Company Gets Around Laws on Pot Delivery 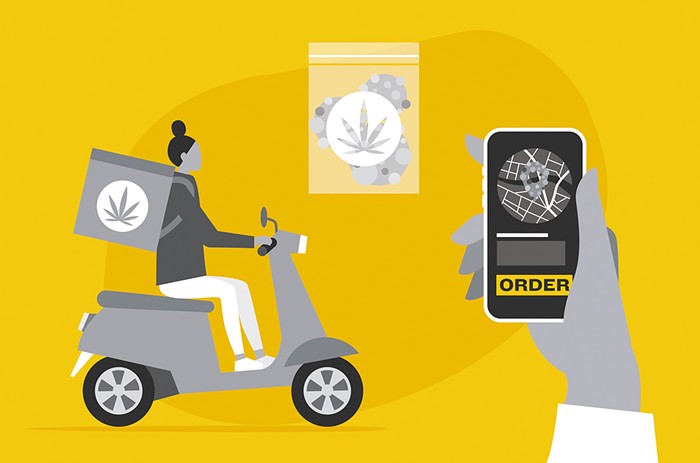 Imagine for a moment that it's a Sunday morning and you spent the previous evening drinking poison. You have a headache the size of a freight train. Your stomach is upset, gurgling, and you're not sure if whatever is in there is going to come out of your mouth or your butt. You feel sick, awful, dead, and all you want is a little bit of weed to get you through this self-imposed illness.

Alas, you smoked the last of your weed a couple of days ago, and the only way you could safely leave your house at this moment is with a barf bag strapped to your neck. If you were in Colorado, California, Oregon, or one of the other states with legal weed delivery, you'd just open up an app and order, but, unfortunately for your hangover, you live in Washington State.

Washington may have been the first state to legalize cannabis, but unlike other states with recreational pot markets, our state has yet to pass legislation legalizing the good shit: home grows, consumption lounges, and weed delivery. Today, if you want to get pot delivered to your house in most of the state, your best bet is to bribe a friend to pick it up for you.

Unless, that is, you live in Bremerton, Silverdale, Shoreline, Yelm, or a handful of other cities in Washington where an innovative company has managed to get around the state prohibition on pot delivery by using a little creative thinking and a lot of technology.

Pelican Delivers, which officially opened last fall, is "kind of like Uber Eats but for cannabis," says Charity Holden, the company's chief marketing officer. They partner with retail pot shops and use independent contractors (i.e., drivers) to deliver their products to your home. For consumers, it's pretty simple: You place and pay for an order on Pelican's website, and a nearby driver retrieves your product and brings it to your house so you can get stoned without putting on your shoes. If this seems like it shouldn't be legal, well, it is because, legally, Pelican is not a weed-delivery service but a tech company.

"We pay our drivers to complete the transaction in the store and to scan the customer's ID at the door," says Holden. "Because of the gifting law, the driver is able to gift half the legal limit, and what the customer is paying for is the in-store transaction and the scanning of the identification." This, apparently, makes delivery kosher, and Pelican has patented the software in the US, Canada, and the UK.

The driver gets paid 80 percent of every delivery fee, which is five dollars plus one dollar per mile. So for a five-mile trip, the driver would make eight dollars plus tip. It's not exactly get-rich money, but Holden says it's the largest payout for any sort of ride-share-type service. And for customers— especially those who can't leave their homes because their kids are crying or their head is in a toilet—it's not a bad deal, either. Convenience always has a price.

Pelican has thoroughly vetted this with their lawyers, and because they are a software company and not a pot company, they are out of reach of the long arm of the liquor and cannabis board. But they may have some competition soon: A bill currently in the Washington State Senate would allow the smallest pot producers—those with 2,000 square feet of growing space or less—to sell directly to consumers at a retail location and allow for pot delivery. Until that passes, however, there's Pelican Delivers—if you're lucky enough to live in one of the select cities where it operates.

Asked if this service will ever be available in Seattle, the company says they're working on it.