He loves to paint naked bathroom selfies of his friends and still-lifes of millennial trash. 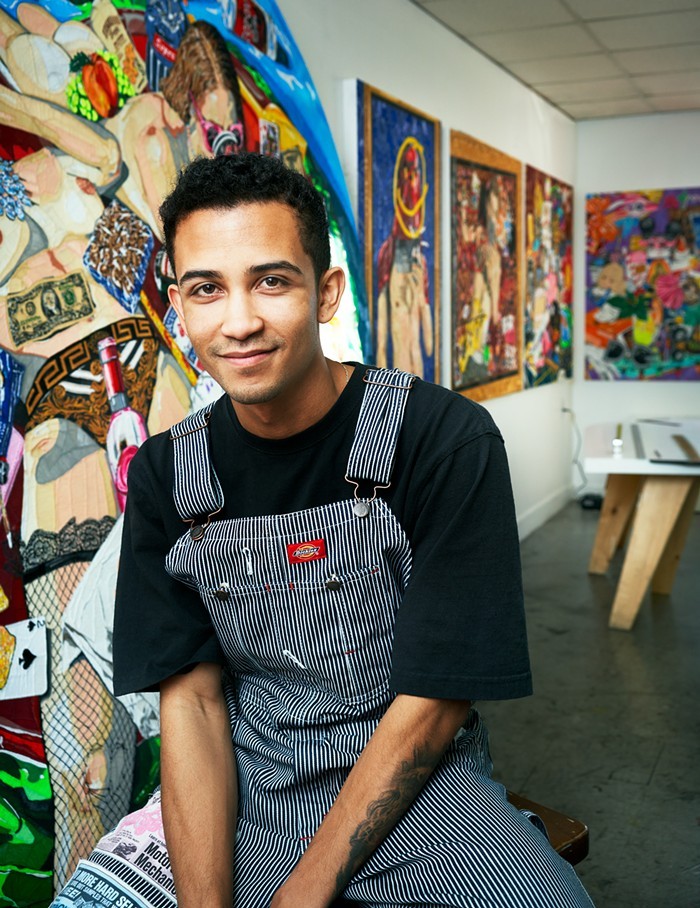 The artist in his Central District studio. TORI DICKSON

Anthony White is standing in front of an unfinished painting in his Central District studio, considering the nude figure before him.

Around the studio, finished pieces hang near half-done ones. They depict crumpled Dick's to-go bags, nipples, stickers, iPhones, bendy straws, skateboards, Capri Sun, sunglasses, nail polish, Mike's Hard Lemonade, Smirnoff Ice, graffiti, and luxurious trash like crumpled Tiffany bags. The surfaces almost look like the local baker had a field day with a sheet cake because of the way the figures are made of fat, methodically laid squiggles of glaringly bright plastic. It's hard for me to resist the temptation to lean over and lick them with my tongue.

"Do you want one of these?" he asks, holding out a plastic container full of gummy bears and popping a couple in his mouth.

White is 24 years old and his work is maximalist to the highest degree. It has been causing waves in the Seattle art scene, and for good reason—it's really fucking cool, and it seemingly came out of nowhere. White graduated from Cornish College of the Arts last spring, had an exhibition in the queer/feminist/punk art space the Factory in June of 2018, and shortly thereafter got scooped up by the most blue-chip art dealer in Seattle, Greg Kucera Gallery. In between, he made his debut at the Seattle Art Fair.

He makes his giant, vibrant paintings on handmade wooden panels, although calling them paintings is almost a disservice to them. They occupy a unique middle ground between painting and sculpture.

For the past year, White has primarily been working with a type of plastic used in 3-D printing called polylactic acid (PLA). Coming in a variety of different colors, the plastic is formed into one long, thick rod and unceremoniously shoved into a hot-glue-gun-like machine. The gun warms up the plastic, making it malleable enough to manipulate and fill in the penciled-in sketches on the panels while still maintaining a puffy shape.

"I started off at Cornish with a huge interest in sculpture, so I was constantly figuring out which materials I liked and which ones worked a certain way," he tells me. "I think a material definitely has a purpose, so those choices should always be correct."

Running his finger just above the surface of one of his paintings, White explains, "I do these repetitive motions to get each and every line on here." His paintings immediately bring to mind the smooshed-together plastic ridges of a 3-D printed object. Only instead of a life-size replica of a human skull or a miniature Eiffel Tower, the painting in question deals exclusively with the two perfectly round ass cheeks of an anonymous male subject taking a mirror selfie on a bathroom floor.

Contrasting with the messy humanity he portrays, he was inspired by the unseen hand of the 3-D printer, a process fed off of algorithms, numbers, hardware, metal, and data points, meant to take the human equation out of design. The surfaces resemble woven, hardened bits of fabric, which is funny given the precursor to computer processors: the 19th-century looms that simplified the process of manufacturing complex patterned textiles. "I am a 3-D printer," White says and laughs.

While we're in his studio together, White is in the process of putting together pieces for his January show, Smoke and Mirrors, at Greg Kucera Gallery. He's one of the youngest artists Kucera has signed, and his work is markedly different from the rest of Kucera's cohort.

On a recent visit to the gallery in Pioneer Square, White's THE RECIPE—a still life crammed with items like a RAZR cell phone, cough syrup, flowers, and a DVD of Mysterious Skin—was hanging above Kucera's desk. Kucera first encountered White's work at his BFA show at Cornish. It was "just so grown up—it was head and shoulders above most of what we see in BFA or even MFA shows in terms of completeness of vision," Kucera said. "I felt like it had arrived fully formed."

The gallerist added: "At the same time, I felt a kind of repulsion toward the work. Like, ugh, all that plastic. Those nubile young boys in all their narcissistic glory. Yet I realized I was seeing something that I hadn't seen before. When you're in the contemporary art world, you do start to pay attention to that—what is your reaction to this? And if you are just being placated by art, you are not having a reaction."

By the way, it's not just nubile young boys. Dominating the majority of White's studio space on the day I visit is a yet-to-be-finished giant circular panel, halved to make the process of painting it easier. Two girls lie across either flank of the piece wearing sunglasses, bikini bottoms, and not much else. It's based off a photo of two friends White took in August, while they were taking in the late summer sun (and smoke) at a nude beach in the city.

The figures are surrounded by cheap vodka and champagne bottles, bongs, and bright snack wrappers. These "low-level" cultural objects are mixed in with luxury items from Commes de Garçon, Off-White, and Versace. A ruby-and-diamond-encrusted bra from the 2000 Victoria's Secret Fashion Show, worn by Gisele Bündchen and valued at more than $15 million, is casually thrown on a beach chair behind the two women. Their respective Cash and Venmo apps, open on the screens of their phones, show $0 in their bank accounts. Meanwhile, that infamous Kendall Jenner self-made billionaire Forbes cover peeks out of one of their bags. "I put that in there a couple of days ago," White says, motioning to the magazine.

"We think we need all these things to keep us comfortable or happy, and we want to be seen with these certain things—but it's just shit in the end," White says. "These things are supposed to convey a message about us, but they don't. It's this false thing that we try to have represent us."

His work consistently deals with this contradiction between abundance and lack. The high and the low. Narcissism and vulnerability.

It's worth noting that the mirror selfies he paints are based on photos friends have sent him. They are a testament to his friends' best selves, the original source photos taken in moments of comfort or beauty.

There's something lustful about these figures, the way their bodies curve just so, and the fact they're naked or mostly naked. Usually there are other things within the context of the painting that give a hint at the subject's own private life: Astroglide lube, Takis, cigarettes, whip-it canisters.

Around each plastic-painted selfie is a meticulously ornate frame that White makes himself with the PLA hot gun, meant to elevate the figures inside them. "In the colonial age, portraits were being made of people with high wealth; if you had a portrait done, it'd mean you had money," he says. "I'm kind of flipping that and cataloging these really abundant photos that are taken by people like me who don't have that kind of power or wealth."

He often keeps little personalized details from the photos friends send him. In one painting, the figure's phone case has a tiny Goku sticker. "I want to immortalize the people that I think wouldn't be otherwise, especially in a painting."

Although White also adds his own elements to the portraits—like patterned backgrounds that he believes best fit each of the figures—these images are presenting their subjects in a way they wanted to be seen. There's a perceived candidness, but it's entirely constructed. This feeling is only heightened by White's chosen medium, a signifier of artifice, of something not quite real or natural.

White is also a curator and an enthusiast of other artists' work. He oversees a recurring group art show called While Supplies Last that began last March and features works from more than 100 different artists for only $30 a pop. "I'm trying to be this community building, co-inhabiting thing... I want to bring a community of people's art into Seattle."

While Supplies Last will have a monthlong residency in February at Mount Analogue, located in one of the storefront spaces at the TK Building. White is also guest-curating a show at the Factory in December featuring Jean Nagai, a Seattle-born, Los Angeles–based artist who hasn't shown in the city for a few years.

And what about White, who grew up in California before going to Cornish? Is he sticking around? "For the most part, I've experienced a lot of Seattle that I've wanted to," he says. "I want to travel, and I think I'll find another city that I really like. And I do love New York." While it's clear that he has a lot of love for this city, there is a wistful look that comes across his face at the mention of New York City. Of possibility. After all, New York is the center of the art world. Given what he's accomplished so far, given that "fully formed" quality of his work Kucera talks about, I have no doubt he could find massive success there.

His work is very much of this century: blisteringly bright and loud, distinctly American, inspired by (and commenting on) technology. These maximalist paintings are littered with remnants of what it meant to grow up in the millennial era, containing references beyond what most people in the art world think a still life or a portrait could consist of. The garishness and plastic-ness of his work, its presumed disposability, is also what makes it hypnotic, compelling, and something you want to fall headlong into.

Now is your chance to see the works in person and shake the artist's hand, so that, years later, you can say you knew him when. Just don't lick the paintings, okay?