I Heard God in a Grain of Sound

A few thoughts about the minimalist-music deity Terry Riley. 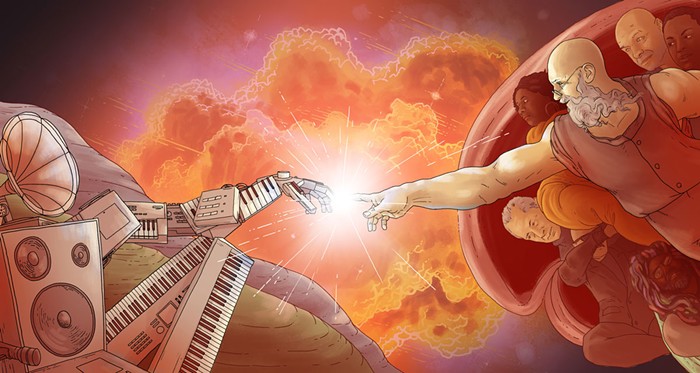 Not to put too fine a point on it, but Terry Riley's music is my religion, my drugs, my ultimate source of peace—although not necessarily in that order. In my musical pantheon, he occupies the upper echelon, along with Miles Davis, Alice Coltrane, Can, Funkadelic, Jon Hassell, Brian Eno, and Wolfgang Dauner. The 84-year-old California composer/keyboardist has become one of the most influential musicians of the last 50 years among artists seeking to tap into that ocean of sound at the intersection of minimalist composition, drone, and tape-based experimentation.

While Riley's music is revered by the more freethinking academics, it doesn't come off as dry and stuffy, like much highbrow output from the neoclassical realm does. Rather, his epic trance-outs are redolent of outdoor raves, psychedelic jam band shows, and Indian raga concerts in the way they accrue a hallucinogenic effect over long durations. Imbued with a pantheistic spiritual profundity, Riley's music seeks to immerse you in the infinite.

In a conversation with fellow American avant-garde composer Robert Ashley, Riley said: "Music is my spiritual path. It's my way of finding out who I am. The rhythms of the land that you live in, the way the sun affects you, have an impact. I think our music has to come out of the land." This strikes me as odd, because Riley's music seems to emanate from vast bodies of water and deep space.

Similarly strange is the sense that his compositions seemingly derive from ragas, North African Sufi/Moroccan devotional music, and gamelan, but Riley insists that they have roots in that echt American art form, jazz. After Riley became a student of vaunted Hindustani singer Pandit Pran Nath in 1970, he began to delve deeper into the intricacies of raga and extended vocal phrasings. Decades later, those elements continue to impact his creativity.

Out of this vital cultural cauldron, Riley has emerged as one of the world's most ingenious improvisers, a minimalist who possesses an unerring knack for the tones and chords that trigger the most powerful holy and healing forces—regardless of your religion, or lack thereof.

Riley's run of recordings from the early 1960s to the mid 1980s ranks as one of the greatest hot streaks in musical history. So much amazing music surfaced during this period that it's impossible to do it justice in the space I have here. But since he's coming to perform here in February, I'll discuss some of the highlights.

Music for the Gift (from 1963 and featuring jazz icon Chet Baker on trumpet) established Riley as a unique presence in avant-garde music. It represents one of the first uses of Plunderphonics in a recording, with Riley warping and disrupting Jr. Walker & the Allstars' R&B hit "Shotgun" into a shattered cubist sculpture. As the piece progresses, Riley renders the sample source to charred detritus and generates a Rube Goldberg machine–like nightmare out of the atomized sound. Music for the Gift stands as Riley's strangest material; he probably rarely thinks about it, but it still sounds ahead of its time.

The 1964 piece In C has been accurately called the big bang of minimalist music. It's an endlessly adaptable work, as radical versions done by the Japanese rock group Acid Mothers Temple, the Canadian ensemble L'Infonie, and the Damon Albarn collaboration with Malian musicians Africa Express prove. No matter how it's rendered, In C is a wondrous gust of fresh air. It gives you the sense of something momentous happening, of many little wings beating relentlessly in a patient ascendance to the heavens, a feathery confluence of mini-ecstasies that you hate to see end. Although it came to prominence in 1968 when CBS issued it on LP, In C—which Riley and Seattle Symphony performed outside of Seattle Art Museum in 2013—transcends its era. One can envision every generation zoning out to its hypnotic undulations till the electricity runs out.

Olson III is a massive piece full of seesawing violins and eerie, automaton chanting recorded in 1967 with a Stockholm, Sweden, high-school band. It emphasizes Riley's reliance on repetition as a means to attain transcendence and hypnosis... or perhaps insanity in those not blessed with long attention spans. Olson III sounds like something Stanley Kubrick might have used in a sequel to 2001: A Space Odyssey—or to score an even more sinister film in the vein of A Clockwork Orange.

One of Riley's most popular recordings, A Rainbow in Curved Air is an unbelievably euphoric geyser of bubbly, bejeweled keyboard effusions. Hearing it is akin to receiving a deep-tissue massage and getting your brain fluffed... in a jacuzzi. We are not worthy of this, but Riley magnanimously bestows the aural blessings anyway. I recommend daily listens upon waking for optimal mental health.

On "All Night Flight" from 1968, Riley uses soprano saxophone, organ, and time-lag accumulator to create an opus that sporadically spasms out of joint, like an opiated dream interrupted by random strong breezes. It's an extended exercise in shuddering ecstasy.

Church of Anthrax with former Velvet Underground bassist/violist John Cale proved that Riley could thrive in an art-rock context—and even get complexly funky, as the duo does on the monumental title track, which I've dropped into DJ sets with rewarding results.

In the liner notes for the 2017 reissue of Persian Surgery Dervishes, which documents concerts in Los Angeles and Paris circa 1971 and 1972, Julian Cowley perceptively summarized Riley's MO: "In the coiling melodies and whirling repetitions of his keyboard solos, he nonetheless sought to connect with the universal mind and to draw music from that source, without the hindrance of a score or any restrictive sense of his own technical limitations." This is mercurial trance music of the highest order, born out of superhuman keyboard wizardry.

Shri Camel is the Riley album that perhaps resonates most strongly with me, as I first heard it while tripping on acid... in Akron, Ohio. Uh-huh. It felt as if Riley's organ tones were communicating on a subatomic level, each triumphal chord cluster and bassy pulsation murmuring that even my miserable self was one with the universe and that whatever passed for my soul would prosper for eternity (preferably not in Akron). What a splendid delusion! I have eternal gratitude for that glimpse into paradise. (The Last Camel in Paris—which is available only on a CD released by Elision Fields in 2008—serves as a live addendum to Shri Camel and as an essential elaboration of this classic album's panoply of chakra-tickling keyboard tones.)

Released in 1982 but recorded in Berlin in 1975, Descending Moonshine Dervishes is perhaps Riley's last classic full-length. It's one of those massive works that move within narrow parameters, but Riley uncannily finds the most sublime tones/timbres/chords/oscillations to propel it, minute variation after minute variation, toward the stars. Possessing the most majestic throb, Descending Moonshine Dervishes could work as an alternative soundtrack to Koyaanisqatsi. It mirrors Philip Glass's obsessive-compulsive genius and thrillingly manic pulsations, but Riley's timbral choices, if I may be so bold, surpass Glass's. On certain days, this feels like the best Riley album.

You will hear many such elements of Riley's sublime, six-decade body of work when he takes the stage at Benaroya Hall with perhaps his most sympathetic collaborator—his versatile, virtuoso guitarist son Gyan Riley.