A closer look at what FEMAIL is doing at Bellevue Arts Museum. 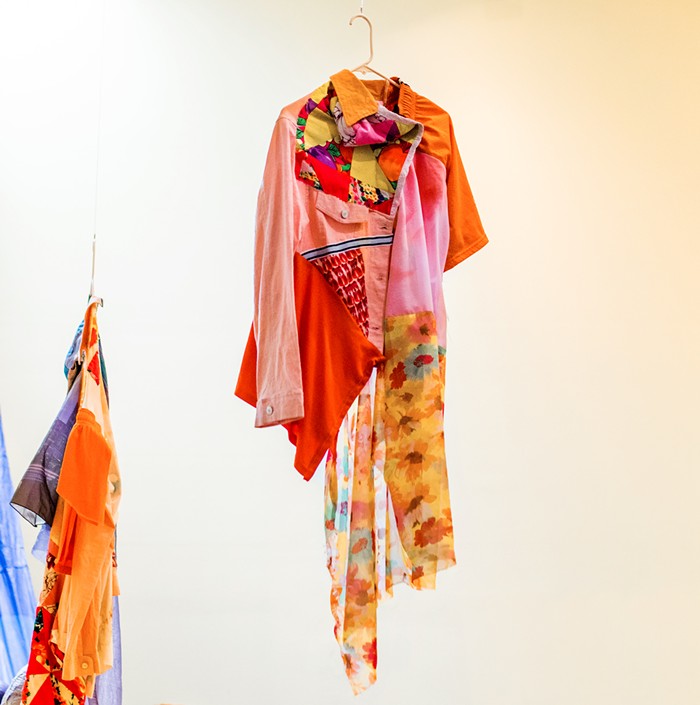 This one-of-a-kind garment is on view at Bellevue Arts Museum through September 30. It was made by the fashion duo FEMAIL, who collaborate by sending garments back and forth through the United States Postal Service.

Janelle Abbott lives in Seattle, and Camilla Carper lives in Los Angeles. They met in 2008 in an elevator at Parsons School of Design. Abbott says: "Camilla is a little more into pop-culture imagery than I am." Carper jokes: "But both of us have pretty equally awful taste."

One of them will stitch one piece of fabric to another piece of fabric and mail it. The recipient will add or remove fabric and send it back. And so on. Some garments travel only twice in the mail, while others travel 15 or more times. Anywhere from 2 to 30 hours is spent making each piece.

"We cram as much as we can into USPS priority mail flat-rate boxes, rolling every item up like a burrito. It usually involves sitting on the box in order to tape it shut."

In this piece, the floral print at the bottom contrasts with the half of a pair of basketball shorts sewn on as a sleeve. "The garments are not meant to be worn by any specific gender," Carper says.

The cute tiger print included in this garment was picked up in Vietnam. Abbott says: "My dad works in Vietnam half the year with a fashion design firm and manufacturer, and I went to visit him two years ago. I scored a lot of good stuff."

The artists also use fabrics found in their own wardrobes. "The world is drowning in fabric," they say. "The fashion industry is the second-biggest polluter in the world," second only to big oil. Annually, 13 billion pounds of textiles are dumped in landfills.

The Attachment to Objects

"FEMAIL really helps me process my attachment to objects. Sometimes I will be surprised by what one of us is willing to cut up. But if your intuition tells you it's okay to cut it, then you are ready to let go," Carper says. The show at Bellevue Arts Museum, titled AMPM, features many garments, as well as "soft sculpture" chairs.