I Believe Her. And Him.

During Ford’s testimony in the Senate on Thursday, her recollection of being assaulted while in high school was vivid, believable, and entirely compelling. She was a model of resilience as she recounted what happened to her as a 15-year-old girl. She described the living room, the bedroom where the assault allegedly took place, and the bathroom where she fled after she says Supreme Court nominee Brett Kavanaugh held his hand over her mouth as she struggled to get out from underneath him. Most vividly, she recounted his laughter, which, to this day, she said still haunts her. Something, clearly, happened to this woman, and I believe Brett Kavanaugh did it.

Kavanaugh was more uncontrolled and emotional than Ford during his testimony later that day. She largely held her tears back; he was less able. He also raged, pushed back against questioning, and blamed the allegation on conspiracies orchestrated by Democrats and on behalf of the Clintons. His anger struck many, especially on the left, as unhinged, but I can imagine that someone falsely accused of rape would have a similar, and equally angry, reaction.

As I watched the reactions to these hearings unfold on Twitter, the almost universal consensus from the liberals in my feed was that Ford was telling the truth and that Kavanaugh was lying. From the conservatives, I saw the opposite. One way to clear this up would be an FBI investigation, but with the November elections looming, the Republicans in power have every reason not to let that happen. Still, during the testimony, I was struck by how insistent both parties are. She seems sure that this event happened; he seems equally sure that it did not.

Both, I think, could be correct.

It is entirely plausible that a drunk Brett Kavanaugh and his friend Mark Judge pushed Christine Blasey into a room, tortured her, and, soon after, forgot all about it. One of the other people who were allegedly at the house that day, Ford’s friend Leland, has said that she doesn’t remember the party or the assault either. And why would she? Ford says she didn’t tell anyone about the alleged attack until years later. For Leland, it would have been just another summer day.

And this, I think, explains Kavanaugh’s insistence that the attack didn’t happen as well. He’s not lying; he really just doesn’t think this attack happened. For Ford, it was an attempted rape that would haunt her for years. For Kavanaugh, it was fucking around, being a teenager, not a violent assault. How could two people have such different reactions to the same event? As the New York Times reported this week, while trauma is frequently seared into our memories, neuroscience research suggests that “there are scenarios in which someone could have committed an assault and yet also have almost no memory of it. If an assailant attaches little significance to an assault—for instance, if he doesn’t consider it an assault—his brain may only weakly encode details of the encounter.”

That, I think, is what happened: She experienced an assault that he didn’t realize he was committing. Ignorance, of course, does not make his actions okay. In fact, it’s almost more damning that two young men could be so cavalier with a girl’s body without even realizing their actions weren’t just harmful, but criminal. It’s a dark mark on us all that something so significant to a woman could be so easily forgotten by a man, but that is the world we live in. When Kavanaugh says the attack never took place, that's because, for him, it did not. What is traumatic for her is, for him, less than nothing. This doesn’t mean Kavanaugh shouldn’t be punished for his actions, but it could help explain why he doesn’t remember them.

I do not, I should say, want to see Brett Kavanaugh on the Supreme Court. His politics and ideals don’t align with my own, he was hand-picked by special interests, and in addition to the credible possibility that he would vote to overturn Roe v Wade and a number of other important precedents, my biggest fear is that, if Congress ever tries to hold Donald Trump responsible for his crimes and corruption, Kavanaugh would be in the majority deciding that sitting presidents can’t be indicted. I don’t want to see this happen. I dearly hope Ford's testimony, or something else, takes him down.

I know, however, that this is wishful thinking. Unless Kavanaugh drops out—and according to his own testimony on Thursday, that’s not going to happen—in all likelihood, the Republican majority will have the votes to confirm him. This episode may haunt his reputation forever, but he’ll still be confirmed to the Supreme Court. And afterward, every time it comes up, Republicans will crow about false allegations, Democrats will crow about toxic masculinity and rape culture, and we’ll retreat to our corners, shouting back at each other, ever more convinced that the other side is cruel, delusional, and just doesn't get it. And on some level, we all will be right. We live in different realities. Thursday's hearings just proved it.

Slog PM: People Are Still Wearing Masks on the Bus, an Activist Glued Herself to a Counter at Starbucks in the Name of Veganism, and Sen. Patty Murray Takes a Stand Against Pot Shops Getting Robbed at Gun Point 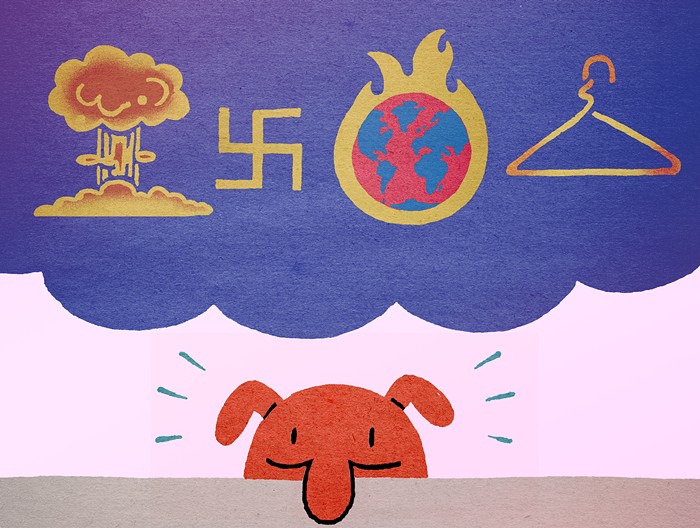