Ristretto Roasters Coffee
In the first episode of Nancy Rommelmann and Leah McSweeney’s new YouTube series, Rommelmann describes the show as “an almost-weekly conversation about toxic femininity, narcissists, fabricators, people who play the victim for personal gain, and related issues that drive us insane.”

Those issues are, to put it mildly, controversial.

In the series, which they’ve entitled #MeNeither, Rommelmann, a journalist based in Portland, and McSweeney, a journalist based in New York, discuss culture war issues like sex, gender, free speech, and #MeToo. And their takes on these issues aren’t exactly popular in contemporary progressive circles. In one episode, for instance, they say Asia Argento and Rose McGowan—both of whom accused Harvey Weinstein of sexual assault and became leading figures in the nascent #MeToo movement—are guilty of “toxic femininity.”

This wasn't the first time they’ve poked that particular bear: Last year, McSweeney—who recently broke the story of in-fighting, anti-Semitism, and racial tension in the national Women’s March—wrote an article in Penthouse alleging that Anthony Bourdain’s suicide was connected to Asia Argento cheating on him. “What has unfolded in the wake of Bourdain's death is a display of chronic, predatory narcissism from Argento and McGowan,” McSweeney wrote. “These two women have used and abused the #MeToo movement—which they have been at the front lines of since the beginning—for their own personal gain." (You can see an archived version of the article here, but it's temporarily unavailable at Penthouse due to a site redesign.)

This caused not a small amount of backlash among many #MeToo supporters, although McSweeney may have been somewhat redeemed when Argento was accused of sexually assaulting a minor some months later and her friendship with McGowan came to a very public end.

At the same time that McSweeney was writing about Asia Argento, Rommelmann was too. In Reason, she recounted meeting Argento in 2003, when she covered the wrap party for The Heart is Deceitful Above All Things, the film Argento directed and starred in about the life of JT Leroy. At the party, Rommelmann asked Argento if she could prove that JT Leroy was real, and, she says, Argento dismissed her question with a sneer. Leroy, famously, turned out to be the fictional creation of a woman named Laura Albert, and the boy who played Argento’s son in the movie was the very same minor whom would later accuse Argento of sexual assault.

The two women connected over their skepticism of Argento. “Leah and I decided to talk about these and other issues that can make people uncomfortable,” Rommelmann told me in an email. “A friend of mine came up with the name [#MeNeither], which we obviously are now seeing was taken as pushback to #MeToo. In fact, it's meant to be much broader than that.” The series, she says, is really meant to be an exploration of taboo ideas as well as an exercise in free speech. It’s two women speaking their minds about, Rommelmann says, “difficult subjects that it's easy to get shot down over.”

As of this week, her position on these difficult subjects has made Rommelmann the latest target of an ongoing trend in Portland—one in which violating social justice norms causes big headaches for small businesses.

Until last October, Camila Coddou had worked at Ristretto, a Portland coffee roaster owned by Rommelman’s husband, for five years, three of them as the company’s operations manager. After quitting last year—after, both parties agree, their relationship had deteriorated—she’s kept in touch with her former co-workers, many of whom she hired herself. It was one of those current employees who told Coddou about Rommelman’s YouTube series.

“These videos were posted on Nancy Rommelmann's public Instagram profile and one of the current employees saw them and got pretty upset,” Coddou told me, “and so she reached out to me because I think she was looking for an advocate and people who are working there currently are upset but also afraid to lose their jobs.”

Coddou (who, full disclosure, I’ve been friends with for over a decade) watched the series and says she was appalled by the women’s conversation, particularly the way they questioned claims of sexual assault. “The reason this is so upsetting is because what it does is support rape culture, and considering the current political climate, we just can't do that anymore,” Coddou says. “Denying the stories of survivors only perpetuates this gigantic problem we have.”

Coddou says she was in contact with 50 current and former Ristretto employees. “Every single one,” she told me, “agreed that Nancy’s viewpoint shared in the video is harmful and destructive.” After conferring with her former coworkers, Coddou sent a letter to several Portland media organizations, which read, in full:

Nancy Rommelmann is an established author and journalist within Portland. A few weeks ago she started a Youtube channel with columnist and podcast host Leah McSweeney, titled “#meneither". This channel currently consists of three videos in which they have in-depth discussions denying the experiences of sexual assault survivors and questioning their credibility, qualify gradations of sexual violence in order to label some as more valid than others, and espousing the idea that trauma is a personal choice.

Nancy Rommelmann also one of the owners of Ristretto Roasters, a local roasting company that has employed and served people within our community for over a decade. As former and current Ristretto employees we feel it is our duty to come forward and publicly denounce the perspectives shared on Rommelmann’s #meneither Youtube channel. The views shared are misguided, dangerous, and hurtful, and do not represent the values of the Ristretto employees signing off on this letter.

We believe it is a business owner’s responsibility to create a safe and supportive working environment for their employees. Invalidating assault survivors throws into question the safety of Ristretto Roasters as a workplace and has the potential to create a demoralizing and hostile environment for employees and customers alike. This cannot be tolerated.

As the public face of Ristretto, the people who make and serve you your coffee on a daily basis, we have done our best to ensure our customers feel welcomed in a business they can feel good about supporting. It is our hope that in sharing this information we can better inform the community at large and make it clear that we believe survivors. We would like to note that we also speak on behalf of some current employees who agree with the sentiment of this letter but do not wish to attach their name for fear of retribution.

That letter was signed by 30 current and former Ristretto employees, but Rommelmann says they got some things wrong. For one, she says that she was never an owner of Ristretto and hasn’t worked there for about a year. Coddou disputes this, saying that Rommelmann was intimately involved in running the company, and, according to the Oregonian, state records list Rommelmann as a manager. Rommelmann’s husband, Din Johnson, says those records are out of date and it’s his business, not hers, but Rommelmann is named on the company’s 2013 liquor license, and, according to documentation provided to the Oregonian, was emailing Ristretto employees about company business as recently as May 2018.

Rommelmann also takes issue with allegations that her views are “misguided, dangerous, and hurtful,” as the employee’s letter claims.

“It is perfectly reasonable and smart to, with consideration, call out so-called survivors’ experiences,” she told me. “I am a journalist. I deal in facts, not feelings. Saying we must believe all women is about as accurate as saying every sandwich is delicious. Most are! Some are not.”

From the videos, it’s clear that the co-hosts do not categorically deny all claims of sexual assault. “Sexual assault and violence against both men and women is real and it's very, very bad,” McSweeney says in one episode, “and that is why lying about it happening is very, very bad.”

In another episode, they discuss R. Kelly, who has been accused of rape, abuse, and kidnapping by multiple women, some of them under 18. Those allegations were investigated by reporters, as well as authorities, and Rommelmann and McSweeney say they do find them credible. But still, they aren’t afraid to question the motives of alleged survivors or to defend men who’ve been accused, including men like Louis CK. In one episode, when discussing CK’s recent attempt to return to stand up comedy and the controversy that ensued, Rommelmann says, “If you don't like Louis CK, don't fucking listen to him. I don't think The Big Bang Theory is funny. Next!” Shortly after, McSweeney says that at least CK asked before he masturbated in front of women.

When asked if she supports the #MeToo movement, McSweeney told me, “I support Tarana Burke’s vision of #MeToo and I support survivors of sexual abuse. It has become muddied when people like Asia and Rose appoint themselves as the faces of #MeToo and when we put Aziz Ansari and Louis CK in the sexual assaulter column.”

Soon after Coddou sent her letter to local media, the Oregonian and the Willamette Week picked up the story and people started threatening to boycott the business. On the Ristretto Facebook page, which as of this writing has a meager 2.4 star rating, one person writes, “I've never had the coffee, but I've had more than enough of the nasty ideology the business owner is promoting. Rape apologists deserve no one's business.” Another comment reads, “Maybe shut up and stop shaming sexual assault survivors? Or just close your doors and get lost.”

Rommelmann, however, has no intention of getting lost. While she would prefer that anyone who has a problem with her views come to her directly rather than targeting Ristretto, she’s not going to stop speaking up.

“That's fine,” Coddou says. “We are free-speaking back. She can have this YouTube channel, but she also needs to understand that while she has the right to speak up, people have the right to not support a business that she helps run. Supporting Ristretto is supporting Nancy Rommelman, and people should know that they’re potentially supporting people who have viewpoints that are harmful and, quite frankly, dangerous.”

Rommelmann and McSweeney, of course, don't consider their views particularly dangerous, but the consequences of expressing them may be, both for the business and the people who still work there. As for what Coddou would like to see happen next, she says if Ristretto takes a financial hit—or even if they go out of business—that’s not her concern anymore. “If it happens, it would just be a result of their actions,” she says, “and at the least the people who support them will know the truth.” 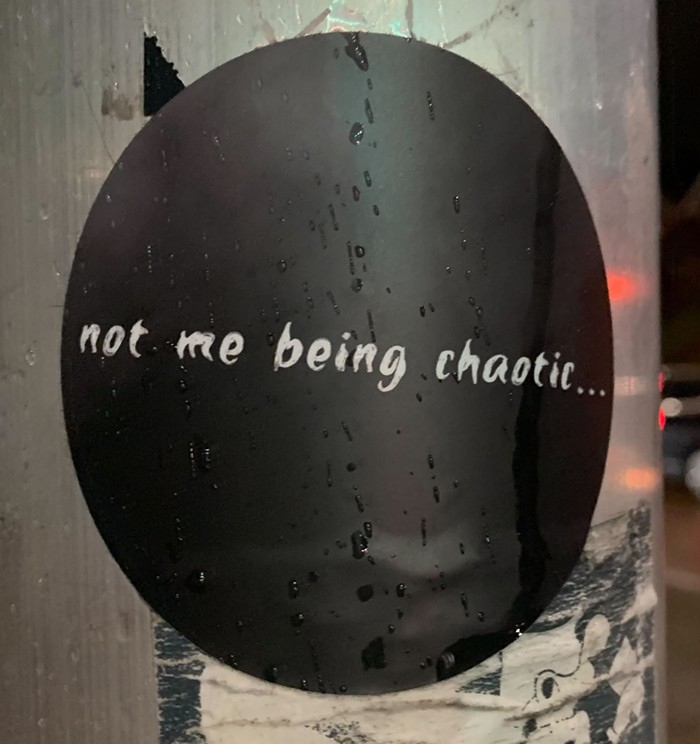