Replacing the Projects with Towers

The Seattle Housing Authority has released ambitious plans for Yesler Terrace, a low-income housing project, that could add over 4,000 new housing units and reshape the skyline on First Hill.

Yesler Terrace has been slated for demolition for years. Built in 1939, the two-story townhouses are growing dilapidated, and the sewer systems are failing. But the question for the Seattle Housing Authority (SHA), a public-housing company that works in tandem with the city to manage the 28-acre site, was how to maintain the low-income housing while making the area feel less like "the projects." 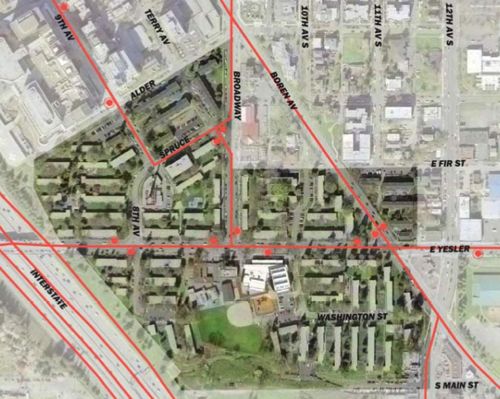 Strictly low-income housing formulas have been phased out at other SHA projects—such as Rainier Vista and High Point—and replaced by mixed-income developments, which avoid some of trappings of tenement-style housing. But to maintain enough low-income housing in the mix at Yelser Terrace (for tenants making 30 percent or less of the area median income), the SHA would have to build taller buildings for maximum density. And according to the proposal released yesterday, SHA is going for it.

The plan would increase the number of units from 561 homes to between 3,000 and 5,000 (a mix of low-income and other units). It would also include 800,000 to 1.5 million square feet of office space and a quarter-million square feet of retail space. In exchange for the postage-stamp yard currently adjoining each townhouse, the apartments would share up to eight acres of parks. The SHA says no concrete heights are proposed, but the lofty numbers of units suggest a mix of buildings could range from six stories to over 20 stories.

This is an excellent decision by the SHA. First Hill is the ideal place for increasing density: Twenty-five percent of the city's jobs are in a one-mile radius and it's surrounded by public transit. Yesler Terrace has essentially been stuck in mid-to-low-density limbo—with only a trickle of through-traffic from pedestrians and no opportunity for stores or cafes—while other neighborhoods like First Hill and Little Saigon have grown around it. This plan would turn the empty paths through the projects into active streets, mix diversity into the area (so poor folks aren’t relegated to “the projects”)—all while increasing the amount of low-income and market-rate housing.

SHA hasn't yet responded to questions about how much low-income housing will be maintained on site (rather than moved off site) or the net gain of new housing. A citizen review committee, which formed in 2006, will advise the SHA on shaping the project. The SHA hopes to break ground by 2011 and complete the project by 2026.

Comments 25
Tags: Blogs Boom
The Stranger depends on your continuing support to provide articles like this one. In return, we pledge our ongoing commitment to truthful, progressive journalism and serving our community. So if you’re able, please consider a small recurring contribution. Thank you—you are appreciated!
CONTRIBUTE NOW