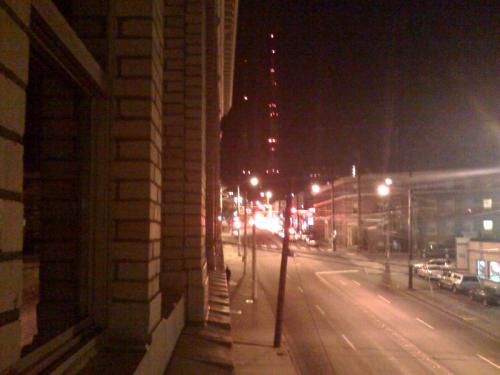 Three men in their twenties were shot at Chop Suey on Saturday night; one, local MC 29-E was killed, and another, 1st Black Prez, is in critical condition at Harborview.

According to a witness, someone opened up the side door at Chop Suey, opened fire, and fled. Police arrested three people in connection with the shooting. Two, an 18-year-old and a 25-year-old, remain in custody.

Several hiphop acts were scheduled to perform at Chop Suey, including Young Soprano, Fatal Lucciano, No Clue, Dividenz, and Anonimous. A witness says Young Soprano was performing when the shooting happened.

One of the show's promoters said he'd been urged to cancel the event because of the possibility of a gang-related conflict.

"There were rumors circulating about the show and people told me not to put it on," the promoter says. "Some of these people are from down south and some of them are from the Central District." He says one of the performers even brought their own security.

The promoter says he heard 5 or 6 shots in the back of the club near the bathrooms and saw the show's host, 1st Black Prez, get hit in the chest.

Comments 289
Tags: Blogs City
The Stranger depends on your continuing support to provide articles like this one. In return, we pledge our ongoing commitment to truthful, progressive journalism and serving our community. So if you’re able, please consider a small recurring contribution. Thank you—you are appreciated!
CONTRIBUTE NOW