This morning I went to Northgate to see the almost-complete Thornton Place, a sprawling compound of condos, apartments, retail and movie theaters that began pre-sale in September and officially kicked off marketing today. So far, no residences have sold. 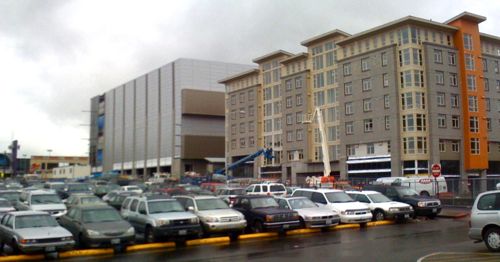 Reporters and cameramen (note to ECB: they were both men) stood around a condo sales center listening to the pitch. Buster, a massive Bernese Mountain Dog, sprawled in the middle of the floor. The place accepts dogs, we were told. The developers, Lorig Associates and Stellar Holdings, are offering to pay buyers' mortgages for six months if they get laid off, free transit passes, no homeowners association dues through July 2010, and an Ikea gift certificate—anything, nay, everything to get tenants and buyers in the door.

An oversized map on the wall illustrated the proximity from the 275 apartments and 109 condos to Red Robin and the Ram. Northgate Mall, technically, is across the street, but Thornton Place, by adding 25,000 square feet of retail and a 14-screen theater, effectively expands the mall five acres south.

(An adjoining project is the Aljoya, a 143-unit retirement facility that will open later this year. This is how developer Rebecca Almo marketed it: “We named it Aljoya for our family who never had a chance to grow old because they perished in the Holocaust.” I … can’t wait to move in.)

“This isn’t a condo project. This is a neighborhood within a neighborhood,” said Steve Holt, an affable project manager for Lorig Associates. “Most of the retail [faces] into the plaza, and that was intentional,” he says. 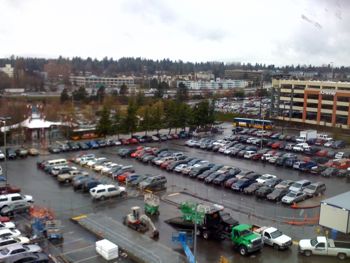 Although the project's seemingly greatest virtue is its proximity to transit—the Metro bus station and future light-rail station are steps away—Thornton Place promotes car ownership: It includes 880 parking spaces underground. “We did not assume there would be lots of folks without cars,” Holt says.

A “neighborhood within a neighborhood” and a deliberately car-oriented development is essentially a walled community and a shopping mall. Holt says the design, in part, resulted from a citizen committee, appointed by the mayor's office, that resisted development on the site but agreed to endorse this megaproject, because Thornton Place preserved the creek.

But we shouldn’t be building more malls in Seattle—even malls with creeks and houses. Malls are dying right and left. Other examples of urban malls, such as University Village, are surrounded by rushing arterials that create a traffic clusterfuck, killing walkable, livable neighborhoods. The recipe for thriving, dense neighborhoods—eyes on the street, promotion of small business, and social interaction out on the sidewalks—was established hundreds of years ago: Build businesses to the curb and adhere to the street grid. Don't build malls and homogenous swaths of housing that turn their backs on the city.

Solution: The city should ban projects of this size and layout. Break up this five-acre lot into small parcels (while continuing to save the creek). Four- and six-story apartments are thriving despite the economy—they would thrive even more next to the future light-rail station, planned to open at Northgate in 2020. Lots of small developments designed by different architects would add diversity to the area—some could include zero parking, some could be family-oriented, others can focus on small inexpensive studios, a few could be expensive, and all could contain space for local businesses at the ground level that promote sidewalk activity—to break the mold of a shopping mall. Thornton Place should serve as a cautionary tale: Lest other aging office buildings become candidates for extensions of Northgate—the mall just expanding and expanding—the city should insist that developers adhere to the successful formulas of mixed-development built around the rest of the city.

Comments 53
Tags: Blogs Boom
The Stranger depends on your continuing support to provide articles like this one. In return, we pledge our ongoing commitment to truthful, progressive journalism and serving our community. So if you’re able, please consider a small recurring contribution. Thank you—you are appreciated!
CONTRIBUTE NOW