The Bittersweet Future of Yesler Terrace

At dinnertime, it smells like fried food and bouillon cubes in Yesler Terrace, the low-income housing development on the south slope of First Hill. The tenants here make 30 percent or less of the county median income. Owned and operated by the Seattle Housing Authority (SHA), Yesler Terrace is home home to about 1,000 people. But their 70-year-old apartment town houses are failing, plumbing is breaking, sewers are crumbling, rodents are nesting, and the SHA will have to tear it down. A couple dozen black kids averaging about six years old played on the sidewalks Wednesday night while about 40 adults in the Yesler Community Center mulled over ideas for how to raze the 28-acre neighborhood and rebuild it.

SHA has committed to retaining housing for those making very low incomes, and avoiding the sorts of long-term displacement typical in wholesale redevelopment. The details remains somewhat unclear; some of those issues will be covered in future posts. But at the meeting, the group focused on how this future neighborhood would integrate with the rest of the city.

In December, SHA announced that it would take advantage of the central location—just across the freeway from downtown—by building a mix of towers and mid-rise buildings that accommodate low-income housing, market-rate housing, office space, shops, and parks. By the time the kids in the streets are adults, dozens of new buildings, including towers as high as 25 stories, will replace the two-story apartments. Architecture firm CollinsWoerman, which is contracted to lay out designs for the project, provided models for how SHA could do it. 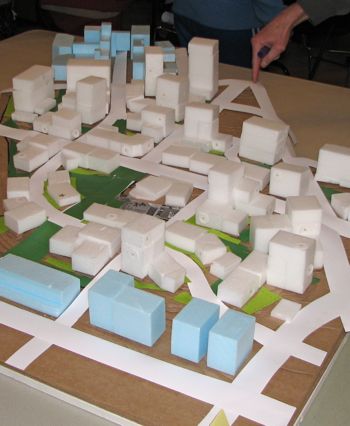 A 20-person citizen review committee, including residents of Yesler Terrace and housing advocates, had a look at the options Wednesday night. Three large models made from cardboard and Styrofoam showed the contours of the hill, and the potential arrangements of buildings, parks, and streets that run through it all. Certain factors remain the same in each model: the amount of housing (around 4,000 units), office space (roughly one million square feet) and retail (a quarter-million square feet). But one variable—the layout of the streets—varied greatly between the models. The choice SHA makes about that one variable will be critical to the area’s future success.

“Creating a true neighborhood that integrates all of the existing communities that are so rich with cultural heritage into the fabric of Seattle is key to the planning,” said Harold Moniz, the project manager for CollinsWoerman. Yelser Terrace sits smack between First Hill, the Central District, downtown and Little Saigon, but on the current street grid, only one street (Yelser) runs all the way through Yelser Terrace, leaving most of it a dead zone.

In one of the options (A), most of the streets would connect in a traditional grid pattern, but would not connect to Little Saigon to the south. In another option (B), the streets would mostly connect to nearby neighborhoods, but they would also wind through Yesler Terrace, and a lid would cap I-5, serving as a park and connection to downtown. And in a third option (C)—my favorite because it's the only one with a street running all the way through Yesler Terrace from north to south—9th Avenue would run from First Hill down to Little Saigon, linking the neighborhoods. 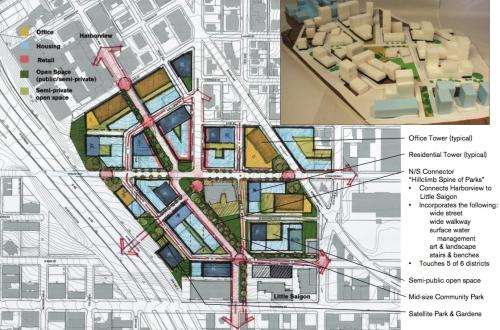 Click the images for a larger size. All of the variables—where parks go, how the streets run, etc—are interchangeable among each of the options. Nothing is set in stone. The other models presented at the meeting (A and B, respectively) are below. 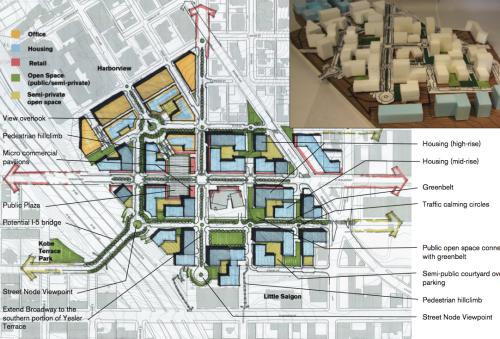 “It’s going to be really tough to connect to Little Saigon because the grades are just horrendous,” said Moniz, holding his hand at a 45-degree angle. But, by regrading the area, he said, “It is possible.”

“It may be difficult to achieve," said Jon Taylor, another architect with CollinsWoerman, noting all of the grading required, "but it is the most productive in making Yesler Terrace whole.” 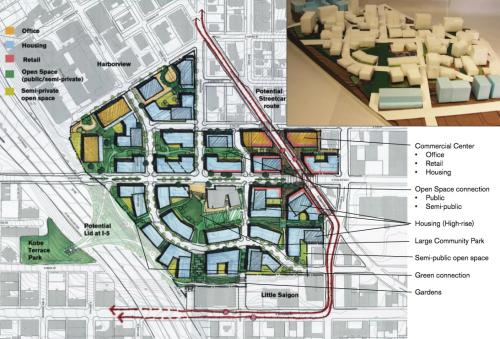 The citizen review committee will continue to advise the SHA on shaping the project. SHA hopes to break ground by 2012 and complete the project by 2026.

Comments 25
Tags: Blogs Boom
The Stranger depends on your continuing support to provide articles like this one. In return, we pledge our ongoing commitment to truthful, progressive journalism and serving our community. So if you’re able, please consider a small recurring contribution. Thank you—you are appreciated!
CONTRIBUTE NOW