The city council will consider whether or not to sell two acres of city streets near Rainier Avenue South and South Dearborn Street (the Goodwill site) to a developer to build a shopping mall this spring. The developer, Darrell Vange, president of Ravenhurst Development, also built Westlake Center. And in case you missed this news from yesterday, here’s how the mall operator behind Wesltake Center is faring:

General Growth Properties, the nation's second-largest mall operator, and with several in Washington state, filed for Chapter 11 bankruptcy protection today after it failed to persuade a majority of its debt holders to give it more time to refinance billions of dollars in debt racked up during the housing boom.

In Washington state, General Growth owns Westlake Center in Seattle, Alderwood mall in Lynnwood, Bellis Fair in Bellingham, NorthTown Mall and two other shopping centers in Spokane, and malls in Aberdeen and Kelso.

You know, I’m all gung ho for building stuff in the city. But shopping malls are Petri dishes for dull chain stores, which suffocate small local businesses competing in the same vicinity. Malls also are failing all over the country, even malls in the city. So we shouldn’t be building more auto-oriented malls, and we certainly shouldn’t be building them in the city miles from the new light-rail station. If the city is going to grant special favors to developers (like giving up publicly owned streets), it should happen in places where the city is aggressively targeting growth. A group of folks are mounting an opposition to the mall on the Goodwill site. More on their efforts over here. And others are also piping up.

“You’ve got the city talking out of two sides of its mouth,” says Jenna Egusa Walden, chair of the Othello Neighborhood Association. The resident council, which has operated since 1996, is adapting the area’s planning to accommodate the new Othello light-rail station. “On one hand, the city and the state are telling us that light rail is coming to our neighborhood it is going make it more walkable and livable, and create economic development that is missing,” she says. “And then they support—at least the mayor has—a major retail project off a mile and half off the light rail.”

It’s worth noting that none of the people opposing the mall are anti-development or anti-density. "We are starving for economic development in the Rainier Valley," says Egusa Walden. "Whatever could have happened near the McClellan Street station would be in direct competition with that project." Some of them are developers themselves. But they argue the development at the Dearborn Street site ought to be built to the street grid. To that end, one of the members of the Community Alliance for Responsible Development, Bill Bradburd, worked with the UW to draft several drawings of high-density development for the Dearborn Street site that isn’t a mall. Here's one of them: 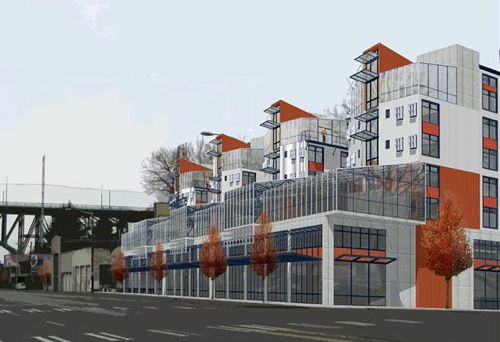 Comments 28
Tags: Blogs Boom
The Stranger depends on your continuing support to provide articles like this one. In return, we pledge our ongoing commitment to truthful, progressive journalism and serving our community. So if you’re able, please consider a small recurring contribution. Thank you—you are appreciated!
CONTRIBUTE NOW