Last night, the Roosevelt Development Group presented four sets of plans to neighborhood residents that, if developed, would transform several blocks of run-down houses along Northeast 65th Street into dense clusters of apartment buildings. The most ambitious would allow the tallest buildings to reach 160 feet—a height that one neighborhood leader calls “laughable.” 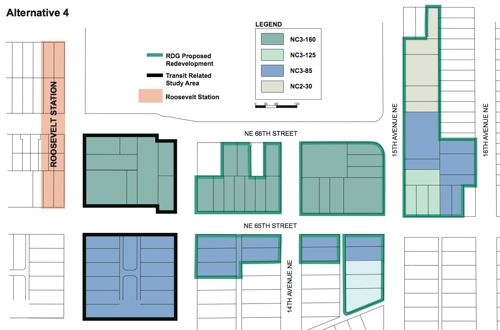 A mid-range proposal caps out with buildings at 85 feet: 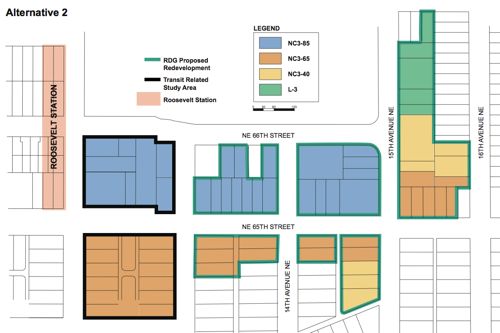 Although eight-story buildings are taller than what neighbors would like (they want 40 foot tall building limits, even though it’s near a light-rail station), it’s more realistic for the area. For instance, in the comparable urban village of Ballard, there are a few 85-foot buildings.

But landlord Hugh Sisley, who dreams of converting his quarter-million square feet of blight into towers, is essentially compelling the Roosevelt Development Group (RDG) to pursue the tallest buildings the city will allow. RDG's Ed Hewson says Sisley "needs to make sure that there isn’t any potential in the land that that he hasn’t taken advantage of.” In other words, to fulfill their contract with Sisley, they have to push the city’s impact review study (of traffic, parking, shadows, etc.) and the neighborhood leaders to their threshold of the tallest buildings they will accept. This is a game of chicken between Sisley, who wants height, and the neighborhood, which hates blight. In theory, Sisley could walk away from the project if the city—lacking a neighborhood endorsement—doesn’t give him the height he wants. How much height does Sisley need before he agrees to build? “I cant really expand on that under our agreement,” Hewson says.

However, 85-foot buildings could present some problems, even though the proximity to light rail is ideal for high density. Under state building rules, buildings over seven stories must be constructed from steel or concrete (not the wood-frame stuff in most of the mixed use projects around town). This adds considerably to the cost. In Ballard, the newly completed Leva apartments (eight stories of concrete and steel), one-bedroom apartments of 900 square feet rent for a whopping $1,987. As of a month ago, the project was offering up to six weeks of free rent and six months of free parking to get tenants in the door. Steel apartments are expensive and hard to fill. Sisley and the RDG may be wise to limit their ambitions to more 65-foot buildings, which garners greater chances of neighborhood support and still allows tremendous density. Moreover, it guarantees the units will remain less exorbitant and will actually, you know, rent. Density potential is meaningless unless you can fill a building with tenants. “We really do want to develop buildings that are attractive and popular, because, for us, that means economic success,” Hewson says.

Comments 34
Tags: Blogs Boom
The Stranger depends on your continuing support to provide articles like this one. In return, we pledge our ongoing commitment to truthful, progressive journalism and serving our community. So if you’re able, please consider a small recurring contribution. Thank you—you are appreciated!
CONTRIBUTE NOW