Being Drunk in Tukwila: Notes from a Transit-Oriented Pub Crawl

"I know a lot of those people over there; the transit nerds, the virgins," said Will Kelley-Kamp, smirking. The blogger and longtime transit ally was describing the crowd who showed up to last night's Link light rail pub crawl. 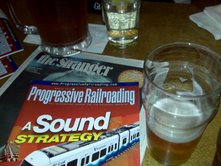 And with scenes like this, he was at least half right. The crawl was organized on facebook by some of the folks from Transportation Choices Coalition, and although more than 90 people registered in the “yes” and “maybe” columns, only about 30 showed up. But hey, everybody loves to say they take public transit.

I missed the first leg of the crawl, which began at the Beacon Hill Pub. It wasn't until I had put back a couple of Boundary Bay IPAs and a fucking delicious piece of cheese covered focaccia bread at the Columbia City Ale House that the crawlers met up with me. They were slightly giddy from their stop at the Beacon Hill Pub and, quite frankly, the historic nature of the event. I mean, it was the first ever Seattle pub crawl that required light rail!

Down in Columbia City, the event coincided with the monthly meet-up for the Seattle Transit Blog (their candidate write-up is here). Politicians in attendance: Mike McGinn, Mike O'Brien, Dow Constantine staffer Chris Arkills, and Jessie Israel.

As expected, conversation at the bar was mostly centered around transit issues and politics, and there was even a train driver who showed up to talk about the Link and show off his user manual. But the transit and political nerdery slowly seeped away as people snuck off to Lottie's Lounge for tequila shots, and eventually descended into debauchery, hooliganism and piggyback bike riding for the dozen of us who continued on to the crawl's conclusion in Tukwila. 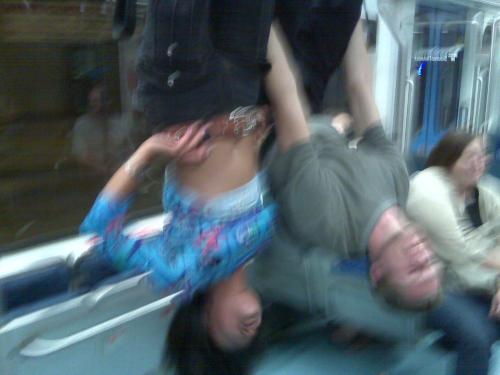 And that is one of the great things about the new light rail: we went to a bar in Tukwila. I've never done that before. The place was called Trudy's and I drank $2.50 cans of Rainier, shook my ass on a carpeted dance floor, and had a ten minute conversation with a beautiful prostitute who was visiting from Las Vegas about how much she liked Seattle's trees and water and how much she hated Tukwila. The bar's DJs also raffled off free bbq sandwiches every ten minutes.

Unfortunately the night's planners were a little too optimistic about the rail service. They said the last train would leave Tukwila at 1:00 AM, which didn't make any sense, and as Will and I hustled back to the station at 12:45 we could see the final train speeding north toward its destination at Mount Baker station.

On the bright side it meant we got to go back and close down Trudy's, but on the dark side it meant a pricey cab ride back into the city. But now we know, and knowing's half the battle.

Comments 20
Tags: Blogs Transportation
The Stranger depends on your continuing support to provide articles like this one. In return, we pledge our ongoing commitment to truthful, progressive journalism and serving our community. So if you’re able, please consider a small recurring contribution. Thank you—you are appreciated!
CONTRIBUTE NOW