Gregoire: Both Tunnel Bids Come in Under Budget, Will Veto Any Bill that Makes Seattle Liable for Cost Overruns 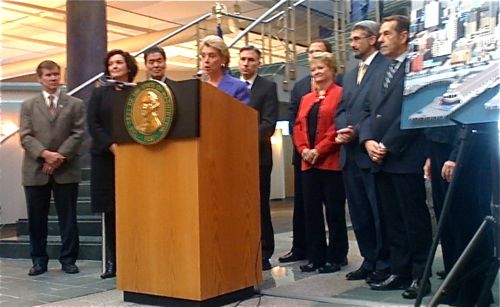 The two remaining bidders vying to construct the deep-bore tunnel under downtown have submitted bids to the state that come in at or below the $1.09 billion budget for this portion of the project, Governor Chris Gregoire announced this morning while flanked by local officials. However, the state won't release the actual amount of those bids until mid-December, after highway workers have evaluated the proposals.

The bidders—Seattle Tunnel Partners and Seattle Tunneling Group—are both conglomerates of tunneling, construction, and engineering firms. Reviewing their bids is "a very confidential process," said State Transportation Secretary Paula Hammond. Bidders will be evaluated using a point system based on each proposal's quality of management, schedule, design, and other technical criteria. The state intends to select a bidder by January.

"I am determined to get this project done on time and one budget," Gregoire said, fending off questions from reporters about the potential for cost overruns falling on Seattle, the ballooning budget of a tunnel in New Jersey that was canceled, and the state's $415 million contingency fund that has been drained to less than half in the last couple weeks.

"If I get a bill from the legislature that says the city will be liable for cost overruns, I will veto it," she said. But if a bills comes requiring the state to pay, she said, "I will sign it." Although a generous sentiment, it seems largely irrelevant considering that most of the tunnel project's construction—in the years costs could skyrocket—will occur after Gregoire's current term ends in 2012. She is widely expected to not seek reelection.

Gregoire tersely denounced the surface/transit option, the de facto preference of many Seattleites who oppose a tunnel or a viaduct rebuild, saying it would create a "stalled city" and impose "social engineering to push people to get out of their cars. I have never seen that." Paradoxically, she argued for using traffic snarls to change behavior and get people into the tunnel—kinda like, uh, social engineering—in almost the same breath. Gregoire was insisting that people may initially try to avoid expensive tolls, wind up on jammed streets, and will then decide "I am going to pay to go through that tunnel."

Tolls on the tunnel would drive the majority of the Alaskan Way Viaduct's current users onto I-5 and surface streets, a state study released this morning found. Unless the state builds the tunnel, Gregoire explained to justify the project's total $4.2 billion price tag, we'll have all 110,000 of those cars on streets and it will "stop I-5."

Gregoire called the mayor's concerns about cost overruns a "red herring," adding, "The only reason I can foresee cost overruns is delay."

"Either we take [the viaduct] down, or Mother Nature will take it down on her terms, and that could be very, very deadly," she said.

Transportation Secretary Hammond said the state will official decide whether to proceed with the project by early July 2011.

Comments 31
Tags: Blogs Transportation
The Stranger depends on your continuing support to provide articles like this one. In return, we pledge our ongoing commitment to truthful, progressive journalism and serving our community. So if you’re able, please consider a small recurring contribution. Thank you—you are appreciated!
CONTRIBUTE NOW