This guest Slog post is by Zachary Watterson, a writer who lives in Seattle.

In this season of goodwill, as we remember the less fortunate among us, Gary Sanford Raub remembers his friend John T. Williams. 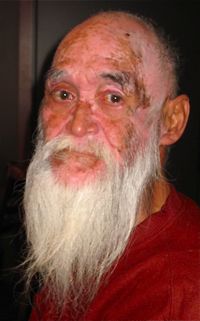 Two days before he was shot to death by a Seattle police officer in August, Williams was walking down Broadway at 7 in the morning wearing a pink dress and no shoes. “That’s how far he was gone,” says Raub, who described Williams’s solo, pre-dawn pageant to me recently at the coffee shop at the corner of Broadway and Denny. Williams’s exhibition apparently wasn’t out of character. News reports have painted him as a man ravaged by chronic alcoholism, seizures, and severe cognitive impairment.

Like Williams, Raub resides on the streets of the city’s Capitol Hill neighborhood. Both men were born Native, Williams to the Nuu-Chah-Nulth First Nations tribe of the Ditidaht band, in British Columbia, and Raub to the Makah tribe in Neah Bay.

I used to see Williams wandering the streets near my apartment building. He seemed well kept and peaceable. But he punched a resident in the mouth at Skagit County detox center in May 2009. And it has been reported that the police were called, a month before his death, to take him away from Dick’s Drive-In on Capitol Hill, where he walked aimlessly among the cars and people, wearing no pants, his legs coated in his own filth.

As we spoke, Raub told me a bit about himself. He said he served in the war in Vietnam and was held in a prisoner of war camp in Cambodia for three years. While he was a POW, he said, he lived in a bamboo cage set in a river that rushed around his legs. His captors used a gaff on him and yanked out his teeth, he said, and as he talked, I could see his toothless gums. One day, Raub said, he was working in a rice paddy, when he saw a sharp rock in the water. He fell to his knees and stuffed the rock down his throat, he said. That night he used the rock to cut open the bamboo cage and escaped. Using skills he had learned as a boy, he studied the night sky and found his way to his base. Raub said that when he got there, no one could believe he was still alive.

Now it’s 40 years later, and he says he sleeps outside the Value Village thrift store. He quit staying in shelters after being robbed repeatedly. In the mornings, he trudges to the coffee shop. I have seen him trudging, like an old devout Buddhist, though he is a Christian.

There’s “one thing people don’t know about John,” Raub says. “He used to give money away.” He was a wood carver. “He’d sell one of his totem poles and have a pile of money.” Raub says “a lot of us”—meaning his tribe of Seattle’s homeless men—are saddened by Williams’s death. “Anybody who was on the street, John had a heart for. It makes me think: How ’bout talking with people instead of talking at people. We need more heart, less hurt.”

The fatal shooting of Williams is one of six incidents listed by the American Civil Liberties Union in its recent request for a Justice Department investigation into what it says is the Seattle Police Department’s frequent use of excessive force, especially against minorities such as Williams. As the city has seen with other Justice Department investigations, including the one into the King County Correctional Facility, where Williams spent part of his life, the probe is a step in the right direction. But the police department’s use of excessive force is unlikely to abate anytime soon. Perhaps it has something to do with the four officers who were shot dead in a Lakewood coffee shop last year. The man suspected of the execution-style murders, Maurice Clemmons, was hunted and killed by police shortly after the officers were slain.

There is a war in our city, and there isn’t a soul who can see its end. As Raub says, remembering his friend, "We need more heart, less hurt."

Comments 96
Tags: Blogs Politics
The Stranger depends on your continuing support to provide articles like this one. In return, we pledge our ongoing commitment to truthful, progressive journalism and serving our community. So if you’re able, please consider a small recurring contribution. Thank you—you are appreciated!
CONTRIBUTE NOW