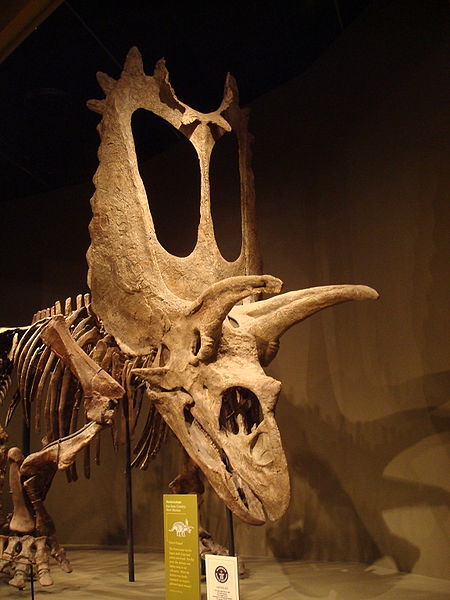 
The Sam Noble Oklahoma Museum of Natural History has a skeleton that had previously been identified as a Pentaceratops.:

But the Sam Noble specimen may not be a Pentaceratops at all. Longrich lists 22 features that distinguish the large specimen from the smaller Pentaceratops and more closely associate it with the subgroup of horned dinosaurs containing Triceratops, Torosaurus and their closest relatives (called the Triceratopsini). On this basis Longrich has called the unique specimen Titanoceratops.

Additionally, like the great Triceratops/Torosaurus debate, some paleontologists have posited that Pentaceratops and Titanoceratops "may be growth stages of just one species as well".

In other paleontological news, Isabelle Kruta of the Paris' National Museum of Natural History took an x-ray that revealed the last meal of an ammonite. Coooool.

Comments 2
Tags: Blogs Science Nerd Dinosaurs
The Stranger depends on your continuing support to provide articles like this one. In return, we pledge our ongoing commitment to truthful, progressive journalism and serving our community. So if you’re able, please consider a small recurring contribution. Thank you—you are appreciated!
CONTRIBUTE NOW