You Will Still Pay More for Kindergarten, Just Not 50 Percent More

A few days ago Seattle Public Schools asked parents to take part in an online poll to find out what they felt about a proposed 50 percent hike to their child's full-day kindergarten fee.

Parents currently pay $207 per month for full-day K. The state only funds half-day and parents and the school district foot the rest of the bill (the district spends $2.1 million for one full-day K at each school—a school building might have as many as three full-day Ks). But a $35 million budget deficit made the district realize that if it had to continue with full-day K, it would have to increase student fees to $310.

At the school board meeting Wednesday, SPS Finance Director Don Kennedy said that the district had previously overlooked $3.3 million in its budget (Q: how do you overlook $3.3 million, that's a lot of overlooking, A: apparently somebody forgot to copy it off a spreadsheet), $1.4 million of which will be used toward full-day K (the remaining $1.9 million will go into a contingency fund). "Which means, families will have to pay an additional $30 (approximately) for 2011-2012, or about $237," said district spokesperson Teresa Wippel.

Not an additional $103. Not right away anyway. The school board will probably increase the fees in the coming years in light of future budget cuts, but they will be "phased in over several years," Wippel said. So, temporary relief for parents of new kindergartners right? But whaddya know. Preliminary results from the survey shows that an overwhelming majority of these parents would have paid the higher fees anyway. 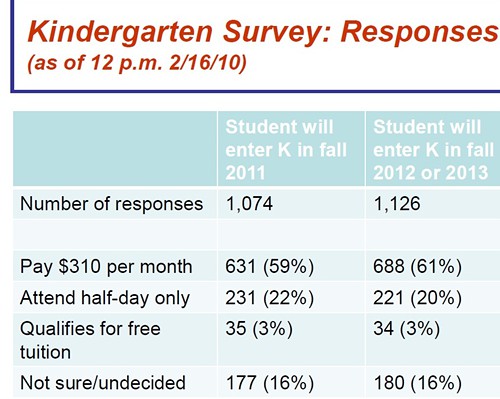 Not surprising, considering that kindergarten is supposed to be an important bridge year for children. Studies have shown that both parents and teachers prefer full-day K over half-day. According to the National Education Association, 60 percent of American children attend full-day kindergarten. The NEA says that research shows full-day kindergarten helps close the achievement gap, improves students' social and emotional skills, and is a sound educational achievement. So why does Washington state only fund half-day kindergarten? Well turns out that our state is only obligated to pay for half-day K because that's what has been considered basic education since the 1970s (meaning that the state has to pay for that even during a tough economy).

The state wants to make full-day K basic education as part of ed reform, and the district obviously loves the idea. The state started "phasing in" funding for full-day K after recent research showed its effectiveness on children, especially those from underserved populations. So far, about 21 percent of all schools have fully funded FDK. In a better economy, the phase in plan would have called for 10 percent more schools to be added every year, but right now, with the state budget crisis, that's no longer the case.

Comments 5
Tags: Blogs Olympia Education
The Stranger depends on your continuing support to provide articles like this one. In return, we pledge our ongoing commitment to truthful, progressive journalism and serving our community. So if you’re able, please consider a small recurring contribution. Thank you—you are appreciated!
CONTRIBUTE NOW