The Delightful Paintings of Joan Hiller

I met Joan Hiller in 2006 at a music festival in Chicago. She was selling CDs and records at the Sub Pop table, with whom she was employed in the public relations department at the time. We admired each others paintings and had a show together the next year in Los Angeles. Eventually Joan started her own company, Riot Act Media, a boutique publicity firm and moved to Portland. Lately Joan has been getting noticed more for her paintings, as they've moved away from literal pop figures to abstract pieces.

Did you go to school for art or painting?
I double-majored in Painting and Communications Journalism at the University of Houston, but dropped out my junior year to write and promote rock shows full-time. 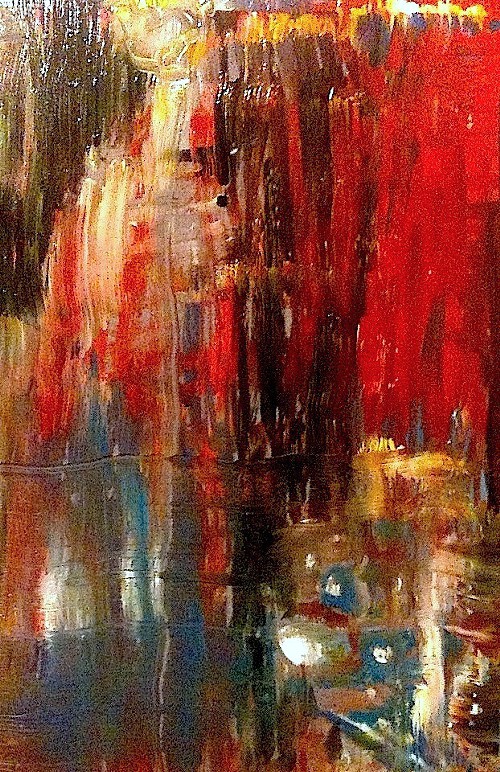 When did you start painting?
I’ve drawn, painted, and made things for as long as I can remember. As a kid, drawing and writing were the two most effortless, joyful things that I felt able to do and decently good at, and it’s remained that way, more or less. I was a horrible asthmatic when I was young, and had to sit and take nebulizer treatments two to four times a day until about when puberty hit. I’d have a steaming mask strapped to my face and be tethered by an air hose to this loudly vibrating, diarrhea-beige air compressor box. You had to just wait it out. I’d sit, and I’d draw, I’d paint, and I’d write stories. My dad is a fantastic painter, although he hardly ever does it (which annoys me to no end, which is me projecting—sorry, Dad), and he would sit and sketch things with me. He’d also take me to all of Houston’s incredible museums—the Contemporary Arts Museum Houston (where I later volunteered as an installation assistant), Lawndale Arts Center, the Museum of Fine Arts Houston, the Menil Collection, the Cy Twombly Gallery, the Rothko Chapel—there’s so much in Houston, partially because oil money endows the ever-loving crap out of the arts there.

After moving to Chicago, I hit a painting lull and was focusing much more on music and pop culture writing, music PR and misguidedly self-seeking (like one does in one’s twenties) than art. My roommates at the time both went to the Art Institute of Chicago, which I could neither afford nor—out of a fascinating concoction of what must’ve been arrogance, fear and laziness—felt like applying to even if I’d had the money. Instead, I’d do their homework when they didn’t feel like it, and I’d sit in on classes with them when the teachers would let me. It wasn’t actually until I met you, Derek, which I think was ten years ago now, that I started painting again in any kind of a serious or directional way—like, painting to show, painting to progress and expand and improve and explore things.

Have you shown in Seattle? If so, where?
My last solo show in Seattle was in 2009 at Tether Gallery, which felt like a total coup because the space is so huge and situated in the filet of all of the Pioneer Square fine art action. I had a solo show in 2006 at Velouria, and another in 2007 at Solo Bar. I had a show at the Anne Bonney with Aja Pecknold (she wrote a kids’ book called House of Song, which I illustrated). I’ve also had stuff up at the old Crocodile, and currently have a couple of small, random things in >Ghost Gallery’s Small Works Gallery. I’m extremely flattered to have been asked about doing a solo show sometime in the not-too-distant future by Fred Wildlife Refuge, so that’s in talks as well.

What inspired the new direction of your paintings? Do you think you’ll focus more on the new style?
It’s a confluence of a lot of notable things, the most directly causal of which was that I unexpectedly and rapidly developed intense feelings for a man in a way that really cracked my heart and eyes open to my own emotional spectrum, which then spilled over this way. I haven’t painted like this since I was a teenager. It always ultimately comes down to love crap, doesn’t it? I think I am not able or wanting to turn back, although I’m going to keep doing portraiture and figurative work as well. 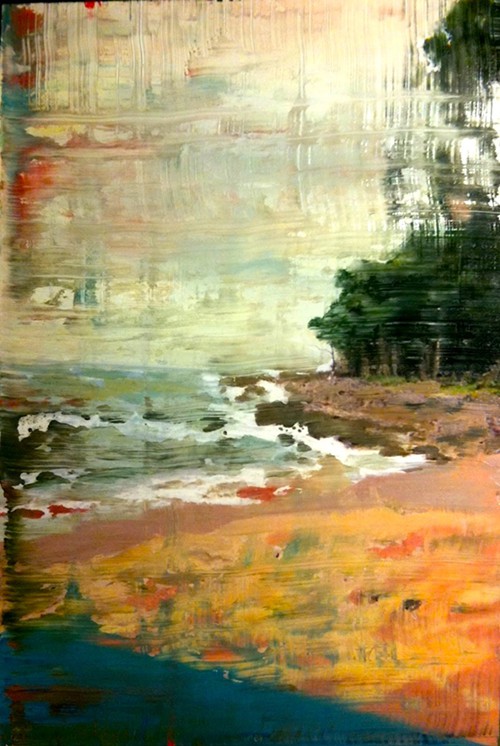 What do you paint on, mainly? Canvas? Wood?
I used to paint on wood a lot and love that surface, but don’t much anymore expressly because in 2007, in an act of pure idiocy, I sold my slightly jacked but mostly perfectly okay Honda Civic to the Sub Pop parking garage attendant for $800 and can no longer easily get to Home Depot. Now, it’s mostly canvas and paper. I buy huge, primed rolls of it at the art supply store down the street from my apartment. I can walk there. Before the end of next year, I want to have space to paint giant, giant stuff. I have passively wanted this for years, and it’s time to act on it.

What do you like to do while painting? Listen to music? TV? Movies?
I realized in the middle of doing one of the new paintings the other day that it completely changed in congruence with the inception of this new abstraction bent. The portraiture and commission work I’ve focused on in the past couple of years has been largely informational, representational, figurative and not overtly emotionally charged. It’s been, like, energetically or tonally suggestive, but there’s a distance and detachment built in much of the time. Which is why me having changed what happens while I’m making these new paintings makes sense to me.

For the last four or so years, I’d always listen to a combination of spiritual/New Age/self-help/astrology talk radio and podcasts or back-episodes of The Best Show On WFMU while doing portraits and commission work. Maybe a This American Life thrown in there for good measure. I would almost never listen to music while painting, or, really, ever outside of work and the occasional show. All of what was going into my ears, with the exception of the comedy and nonfiction stories, was information that I wanted to specifically learn, absorb and process: ideological fodder or inspirational, philosophical diatribes. I’ve rarely watched scripted movies or cracked novels in the past five years, but have been bonkers for documentaries and have shelves full of nonfiction books on the same topics I enjoy listening to people talk about while I paint portraits or commissions. It’s like I’ve felt like if I was giving myself down-time to read or watch something, I’d better be working towards gaining a better understanding of things, honing my life chops in a direct way. 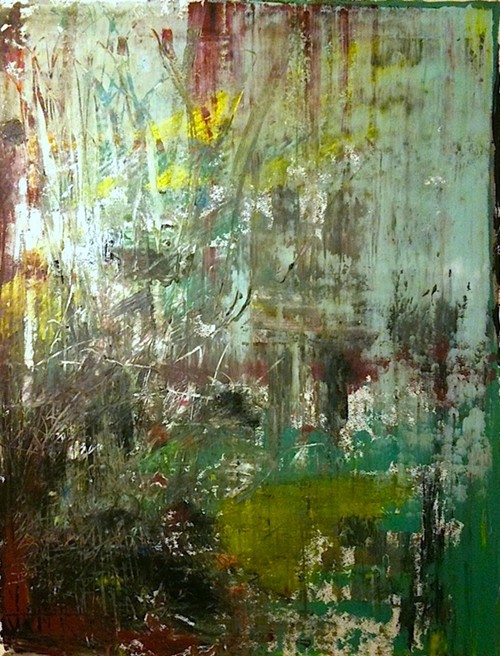 What that line of thinking doesn’t take into account is, among other things, the obvious truth that what you absorb from music, a great film, a touching poem or an engrossing novel is richer, deeper, more sensual and emotionally-charged than what you absorb when you are nearly exclusively hell-bent on amassing information that you hope will serve to support your questioning mind, help keep your heart open, and keep your ego feeling secure that you’re objectively working towards a goal of understanding as much as possible about the capital-u Universe. We get profound, inexplicable, crucial things instantly when we hear an unstoppable song or read a brilliant verse of Rilke or watch Stardust Memories or whatever that we just can’t get any other way. I was not opening myself up to that in my life in general very much, and certainly wasn’t really incorporating that into my painting process. Just as abstraction started happening, I started reading poetry, watching actual films, and actively listening to music again for pleasure. It all happened simultaneously. So, the short answer is that lately, I’ve been doing these abstracts to Kate Bush, Chet Baker, Talk Talk and various operas. (You: “Pretentious-sounding, much?” Me: “Cram it.”)

What are your current favorite things to eat?
I made a sandwich the other day out of grilled olive bread, avocado, and sea-salted peanut butter. I almost shit myself, it was so good.

What other painters do you enjoy?
Richter has been a big one for a long time, which is why I am partially totally kind of aping his squeegee technique. Milton Resnick, David Hockney, Cy Twombly, Jasper Johns, Joan Mitchell, Joni Mitchell, Rothko, Mary Cassatt, Derek Erdman, Karen Ann Meyers, Paul Kottke, 849,032 others.

Do you do rather well selling paintings? What would you say is the average price for your paintings
I’ve had a couple of months this year that, for the first time in my life, I’ve made more money painting than I have as a publicist. That’s been astounding and really fucking awesome. I’d say I do rather well because, to me, any money I make painting is me doing rather well, just like any money I make with Riot Act, which keeps expanding, is me doing rather well. That answer makes it sound like I have that stupid thing people have when they’re money-averse—don’t get me wrong; I love money and want more of it. Preferably enough to actually get health insurance and have a car and be debt-free and have a savings cushion, but who’s counting? (Me.) How your paintings are priced, just like how your business grows if you’re a small business owner, freelancer, or entrepreneur, is something that usually evolves slowly (but surely, if you keep at it) over time. Unless something crazy fantastic happens that effects how your work is viewed and/or you gain overnight patronage and/or fancy gallery representation, that is. The average price range for a painting right now is from $100 to $2,000, and the bulk of what I sell is in the $200 to $500 range. I sell the overwhelming majority of my work straight from posting photos on Facebook and Twitter (@joanhiller). Which, weird, but hey. It’s working right now, and I’m more thankful than I can say for that.

Comments 4
Tags: Blogs Arts
The Stranger depends on your continuing support to provide articles like this one. In return, we pledge our ongoing commitment to truthful, progressive journalism and serving our community. So if you’re able, please consider a small recurring contribution. Thank you—you are appreciated!
CONTRIBUTE NOW