Dispatch from Istanbul: The Square and the Park

(The author is a Seattle native who moved to Istanbul in January of 2006. Find his first report right here.) 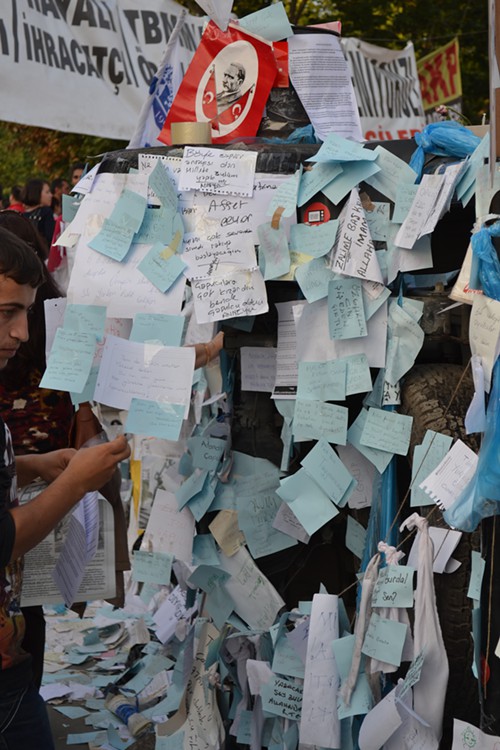 On a visit to the Square and the park yesterday evening (Thursday) here is what I witnessed. The Atatürk Culture Center, which has been derelict for years now thanks to the AKP’s systematic closures of such facilities, is covered in banners bearing everything from pictures of Turkish revolutionary hero Deniz Gezmis to a central statement of “Shut your mouth, Tayyip!”

Walking up the marble steps from the square into the Gezi Park, the tone quickly changed. The pre-fab buildings the protesters had been ransacking on Saturday have now been converted to the “Museum of the Revolution.” Just beyond this, the vendors who ordinarily sell umbrellas are now selling Guy Fawkes masks à la V for Vendetta along with goggles, face masks and cans of spray paint. The abandoned police paddywagon from a few days ago has been overturned and converted to a message board. The park has become home to thousands of people, with tents set up on every square foot of grass. At one end, fans of the Besiktas soccer team (one of the big three teams in Istanbul, whose involvement in the demonstrations has been a crucial part of their success) have hung up a giant Besiktas “CARSI” sign marking their presence.

Not only the park was reclaimed on Saturday. The government has taken to calling protesters “capulcu” (pronounced chap-ool-joo), meaning vandal. The word has been re-appropriated and is used everywhere. Music videos like “Everyday I’m Capuling” have appeared online:

I even saw a watermelon vendor with “capulcu karpuz” (vandal watermelon) carved into one of his melons.

Taksim Gezi Park is a complete world in and of itself. There is a lending library full of donated books. Free food is passed out to the 24-hour occupiers several times a day. There is a Gezi Park chess corner. A makeshift hospital has even been built. A doctor working there, who asked me not to photograph the doctors and whom I will call Dr. Cem, spent a few minutes explaining how he came to be there. He told me he was a medical student at a local university and said that “when I saw what was happening, I couldn’t just stay home and watch. When I got here, I thought, this must be what the Paris Commune was like.” The doctors wish to maintain their anonymity because many work at government hospitals and could risk losing their jobs. When asked what the most common injuries included, he said, “The first day it was mostly hysteria cases,” but went on to say that he has dealt with a number of wounds related to people being hit with tear gas canisters. A foreign reporter complaining of a toothache took his attention before I could ask him anything more.

The comparison between the Gezi Park occupation and the Paris Commune of 1871 is apt. The park is anarchy in its purest form: a tremendous demonstration of human cooperation. There are no laws except a series of “rules” written on a poster of which the only true commandment is “No stones, no clubs.” The park is also notably clean, its thousands of residents picking up after themselves, with reminders not to throw any trash on the ground announced at mealtimes. 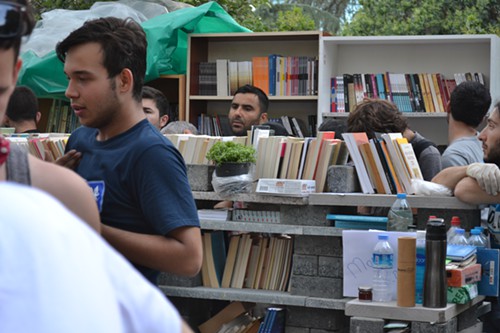 Circling back to the stairs leading into Taksim Square, the feeling was decidedly more political. I witnessed a man and woman with microphones atop a bus overlooking the square, speaking to the people. When a scuffle broke out among the crowd, one of the two shouted, “He’s throwing stones! Stop that man in the orange mask!” How well the crowd complied with his request was beyond my range of vision, but the protesters have been excellent at stopping violence among their own ranks. There were a number of “single issue” groups along the edges of the park who were clearly pursuing their own agendas, including the controversial Kurdish liberation movement, among others. If there is one thing that might stand in the way of the success of Occupy Gezi, it is the disparate interests of the involved parties. What I saw in the park was perfect harmony, but out in the square there were countless different flags being flown. 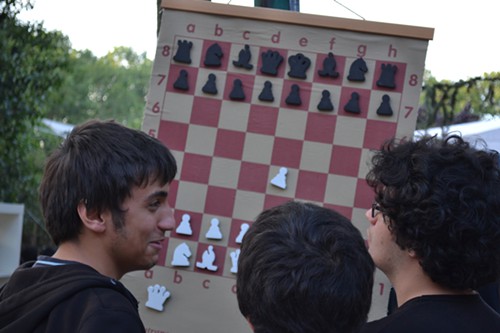 Comments 7
Tags: Blogs International
The Stranger depends on your continuing support to provide articles like this one. In return, we pledge our ongoing commitment to truthful, progressive journalism and serving our community. So if you’re able, please consider a small recurring contribution. Thank you—you are appreciated!
CONTRIBUTE NOW