I've reported previously about Jeremy Griffin, a construction worker who's been fighting foreclosure and eviction from his South Seattle home. A week after our story on him appeared in the paper, King County Court granted him a stay on the eviction. (The judge who had authorized the eviction seemed to sympathize with Griffin, saying, "I'm kind of stuck with what the law says.") That stay expired last Tuesday, June 25.

Griffin returned to court and tried to get the eviction order thrown out, but the judge refused to listen to his argument. He expects another eviction notice from the King County Sheriff soon, but his supporters from Standing Against Foreclosure and Eviction (SAFE) plan to blockade the house once again.

In the meantime, Griffin and SAFE aren't waiting for another eviction notice. Today, three SAFE organizers, a volunteer for the Kshama Sawant campaign, and renowned 86-year-old progressive activist Dorli Rainey were arrested during a sit-in at a Wells Fargo branch downtown. They sat down in a row across from the bank tellers, pledging to stay until Wells Fargo came to the negotiating table with Griffin. Several dozen protesters outside, including Sawant herself, shouted, "Corporate crime scene! Banks got bailed out, we got sold out! You're arresting the wrong people!" Griffin, who had just finished work, arrived as Rainey was led into a paddy wagon outside. The police did not handcuff (or pepper-spray) her.

The five arrestees have been released, but Wells Fargo could still press charges and drag them into court—as Bank of America tried to do to a guy who protested with washable chalk. "We're not going away," Rainey told me by phone. 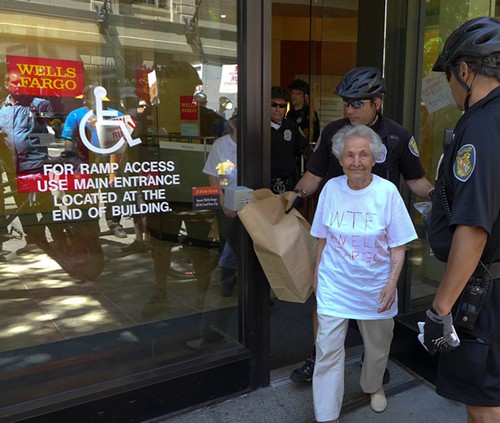 Griffin has repeatedly tried to negotiate with Deutsche Bank and Morgan Stanley so that he could stay in his home (I'll explain the Wells Fargo connection in a minute). Those turned out to be dead ends. Griffin, drawing on his experience for the Cannabis Defense Coalition working to change state laws, tracked down an 800-page financial document on the Securities and Exchange Commission's website called the prospectus. After poring through the document, Griffin identified Wells Fargo as the master servicer of the mortgage—with the power to accept his offer of a rent check, to negotiate with him, or to continue with the foreclosure and eviction process.

A Wells Fargo spokesperson would neither confirm or deny trying to evict Griffin when I reached her last week. She issued a statement and refused to say any more: "Wells Fargo offered Mr. Griffin financial relocation assistance numerous times to help him transition to a new residence. We view foreclosure as a measure of last resort, but unfortunately, in some cases it cannot be avoided." Griffin finally received correspondence today that states unambiguously, "The Property has been foreclosed on in a proceeding conducted by or on behalf of Wells Fargo." 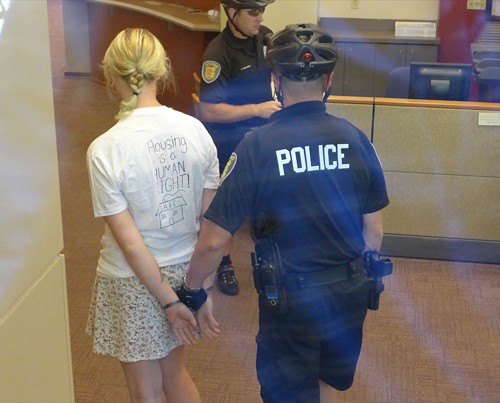 At the 47-story Wells Fargo Center downtown, security officers have repeatedly locked down all eight or nine entrances to prevent Griffin or his supporters from coming inside, sometimes closing the branch early. The bank rebuffed an attempt by Griffin yesterday to deliver an oversized (but real) check for $7,000.

Here's my thought about all this: During Occupy Seattle, a lot of liberals, including some at this paper, complained that the group didn't have concrete enough objectives. They said the group became too chaotic and drifted away from the raising the most resonant issues of the day—financial malpractice by the banks and economic inequality.

Well, here's what they were looking for. SAFE is an outgrowth of Occupy Seattle. Its focus is on working class people being victimized by banks. And its methods fall firmly within the tradition of non-violent civil disobedience.

Reporter Chris Hayes calls the country's foreclosure crisis a "nationwide crime scene." The impacts are being felt locally by homeowners. A study by United Black Clergy and the Washington Community Action Network found that "42,000 Seattle homeowners (one in three) are $3.9 billion underwater on their mortgages." Many face foreclosure—at least 16,000 already have since 2008. A search of Seattle on Foreclosureradar.com—a site for people looking to snap up cheap, auctioned homes with recent or pending foreclosures—returns 1059 results. Dozens of homes are auctioned off every week.

Marliza Melzer, an herbalist and mother of three who lives near the airport, says a bank is in mediation with her but is proceeding with foreclosure anyway. I asked her why she was protesting with SAFE. "I'm tired of being fucked, alone," she told me.

Look out for an animated video explainer of Griffin's foreclosure process coming to your friendly neighborhood Slog tomorrow.

Comments 40
Tags: Blogs Economy Occupy
The Stranger depends on your continuing support to provide articles like this one. In return, we pledge our ongoing commitment to truthful, progressive journalism and serving our community. So if you’re able, please consider a small recurring contribution. Thank you—you are appreciated!
CONTRIBUTE NOW