The Flap Over a Flag on Orcas Island

It's okay that you're gay, as long as you don't throw it in my face. It's amazing that that's still a thing. But it is. I'm okay with you being gay as long as there's no visual evidence that you exist. What they really mean, these people, is I'm okay with you being gay as long as you don't express it, but "express" is such a soft, anodyne, silly verb, such a non-threat, and they (these people) need an aggressive verb, a verb that says: Look at this awful thing gays are doing—throwing it at me! Happily, in Seattle, "don't throw it in my face" is not really a thing anymore. Gay marriage is legal. The most likely next mayor is gay. The current city council president is a lesbian (although, don't get me started). The It Gets Better Project was invented here. But if there's anywhere in the state better on gay stuff than King County, it might be San Juan County. Gay marriage passed by 67 percent in King County, higher than any other county in the state except in San Juan County, where it sailed through at 71 percent. (Likewise, 68 percent of San Juan County voters approved marijuana legalization, the highest approval rating in the state.)

So it's kind of surprising what David Ellertsen and Lee Hilands Horswill had to put up with this summer. They are new residents on Orcas Island, they are longtime partners, and they are owners of a new bakery called Brown Bear Baking. It's right in the center of Eastsound, in the center of Orcas Island. They moved to Orcas Island in May to fulfill their dream of opening a bakery. "We didn't just want to change our careers—we wanted to change our lives," says Horswill, 47, about their previous life in Las Vegas. "We'd gone to pastry schools during our vacations." They tried to find a spot in Las Vegas, but they could never find a location/landlord/building combo that felt right, and then they found an Orcas Island bakery for sale online, on Craigslist. (Ellertsen lived in Seattle for 10 years before living in Las Vegas, and he'd been to Orcas before.) They visited in March, they moved in May, and immediately they started construction on Brown Bear Baking. Their goal was to open by the Fourth of July.

"Since we had a flag pole, we wanted to do two things," says Ellertsen, 45. "I wanted to fly the American flag, because the last owners refused to do that and I have a military background." His six years in the navy included the first Gulf War. "But beyond that we also wanted to fly the pride flag for pride week." He knew that the end of June was pride week in Seattle, and even though Brown Bear was still under construction and not quite open yet, well, they had this flag pole sitting out front, with plenty of room under the stars and stripes.

At the end of June, in the middle of the night, while both flags were flying outside their business, disaster struck. "We got in a car accident that was nearly fatal for both of us," Ellertsen says. "We had been working really long days trying to get construction done to be open by the Fourth of July. We were pushing too hard. We went off the road into the harbor, off into the ocean, upside down, trapped in our car... Lee basically drowned," Ellertsen says. "I went back under to pull him out. To make matters worse, it was his birthday. So that was our baptism by fire or whatever you want to call it."

Horwsill was flown off the island to a hospital, and Ellertsen stayed by his side. "Meanwhile, back at the island troops rallied around the bakery—it was amazing," Ellertsen says. "The sincere friendliness of everybody here that we've met... Other residents came down to the bakery, asked how they could help, started unpacking boxes and getting products on shelves, did whatever they could to help out. During that same time frame there was work being done on the outside of the bakery. One of the workers approached one of our employees and asked if the key to the building also unlocked the flag pole. And when asked why, this worker said, 'Because we want to take the rainbow flag down,' and that there would be people on the island who would cheer. So the person working for us called us at the hospital and let us know this had happened. When I got that bit of news, I was like, 'We only intended to fly flag for pride week.' But when I got that news I decided, 'It's flying 365 days a year.' Don't even pull that kind of crap with me."

Except... that's not the end of the story. They returned from the hospital and got their doors open July 13. "We lost count on how many people would stop by and just take pictures with the flag," Ellertsen says. "This flag pole has been here for years—this building used to be a bank. But it was the first pride flag on the island." And then another message came their way, this one from their own landlord. "Toward the end of July we were approached by the building owner who said they were simply being a messenger—they even vocalized that they weren't here to take the flag down—they just were vocalizing a message from 'a number of people,' is how he put it. He said, 'I'm not telling you to take it down, but everyone is saying: 'We're okay with you being gay, but you don't need to throw it in our face by flying it all the time.'"

There it is! "You don't need to throw it in our face." They didn't even know who it was who had this problem with the flag, or how many people it was if it was true that it was "a number of people," but they also didn't want any trouble. "So we're like, 'Okay, let's think about this. We don't want to ruffle any feathers,'" Ellertson remembers. "The business question about whether to fly it could work either way. And we want people to feel comfortable." Maybe they'd misjudged the island, maybe they'd made their point already, maybe it was time to take it down after all. That was their conclusion. "We just decided to do it because we wanted to make everyone feel welcome, so we took it down the following day. Just to say: We want everyone to feel welcome. Everyone. And we don't know everyone. It was a very difficult position."

"It didn't take long," he says, "24 hours, 48 hours later, people coming in saying, 'Where's the flag? Put the flag back up.' Then a fellow business owned by two guys across the street—they're a couple—one of them approached us and said, 'We'd like to write a letter to the editor of the Sounder, not because you took the flag down but because of the anonymity of the protest."

Those two guys were Michael Rivkin and Jeffri Coleman, owners of Crow Valley Pottery. "We heard about it and I said, 'Man, that's really an issue.' If people have a problem with the flag, they should come forward and speak," says Rivkin, 53. He and Coleman are both potters and they've owned their shop since 1994. "People can be against the flag, they can be against anything—I just don't believe in the anonymity part of it." Rivkin says, "Our whole issue was we were angry that no one had put their name to their opinion. It was: Own your opinion. Just don't hide. The KKK used to do that—they beat Jews and they lynched blacks back in the day, hiding behind sheets."

Rivkin and Coleman wrote a letter to the editor that was published in The Islands' Sounder, and it struck a chord. "It set every record that The Island's Sounder's had in terms of online hits, Facebook hits, likes," Rivkin says. "And the community rallied." The letter was also published on the blog Orcas Issues, where State Senator Kevin Ranker got into the comments to say he considered the anonymous complaint "an archaic attempt to stifle equality and basic civil rights" and that the anonymity represented "unbelievable cowardice." Ranker is straight, the first elected official in state government from the San Juan Islands in over 100 years, and he lives on Orcas Island. "I thought it was frankly appalling what happened," Ranker told me when I got him on the phone earlier this week. "I almost never write on blogs or anything. My communications team was saying, 'Wow, you sure you want to be that blunt?' But this really angered me."

"It's appalling that it would happen anywhere, but in our community?" Ranker went on to say. "People really rallied to make sure whoever these folks were who thought they were living in 1950 in Witchita knew, 'No, you're living in 2013 on Orcas Island. And that kind of behavior is unacceptable.'"

"Then people really started coming into our bakery," Ellertsen says. "People saying, 'That's not what Orcas is about, put your flag back up.' That went on for the better part of August until we decided to put it back up. But we wanted to make a bigger statement about it, so we went around and talked with our neighbors about celebrating the diversity of the island—artists, musicians, LGBT people, you name it. It's a very diverse community. Lee was saying it's probably the most gay-friendly of all the islands. We personally canvassed the town and asked all the business owners: Would they be interested in flying the flag in the name of diversity? We bought 18 flags. Another business owner did it on their own accord bought 10 more flags—so we had 28 flags." Horswill adds, "And a lot of the business owners, when we approached them, said, 'Oh, you don't have to worry about us, we already ordered our flags.' What we were surprised by was all the business owners who had already taken initiative before we reached out to them. Even very conservative businesses said, 'You guys were treated very unfairly and that's not what Orcas is about.'"

I happened to be visiting Orcas Island for the first time on Labor Day Weekend—when a bunch of Seattle drag and burlesque performers had a show there—and there were rainbow flags on everything. Business after business after business, and a lot of houses too. "I thought it was a really amazing response," says Jared Lovejoy, proprietor of the Barnacle, a nautical-themed bar two blocks from Brown Bear. "It was a very cool, positive show of support from our community. I was surprised and touched and it was very moving having all these people in your tiny little community stand up for something like this. It meant a lot. And I think it meant a lot to a lot of people, gay or straight. This is the kind of world we want to live in. Not the world where people put divisions around things." The original idea was just to have flags up for Labor Day Weekend, but "a lot of businesses kept their flags up," Lovejoy says. "They're still up. And the main flag is still there. They're just leaving it there. It's now an institution."

State Senator Ranker said, "I think it's hilarious: I hope that these people"—whoever anonymously complained—"are having troubled times driving through Eastsound with pride flags on every building." 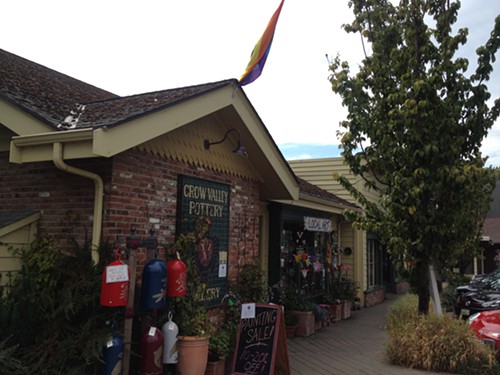 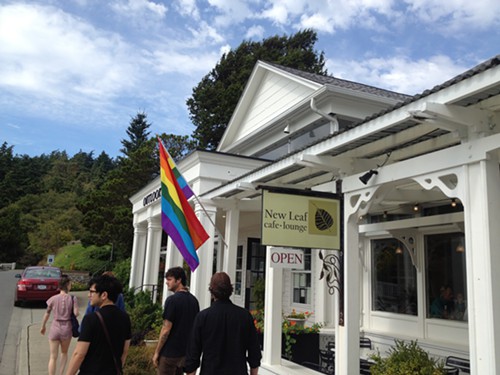 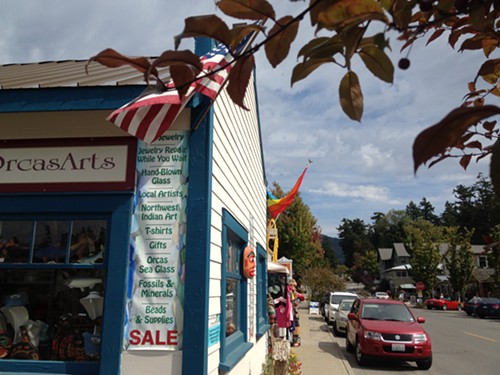 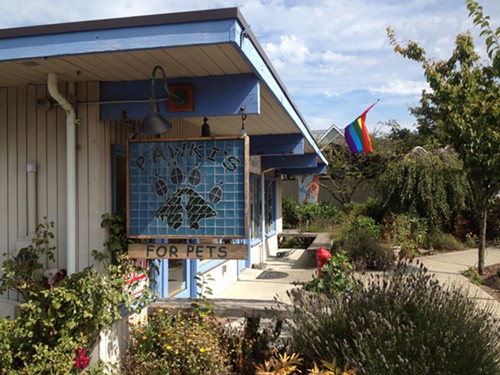 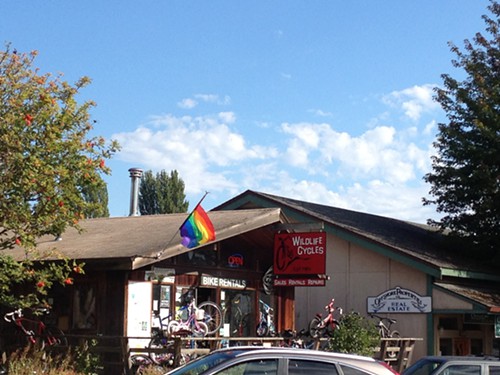 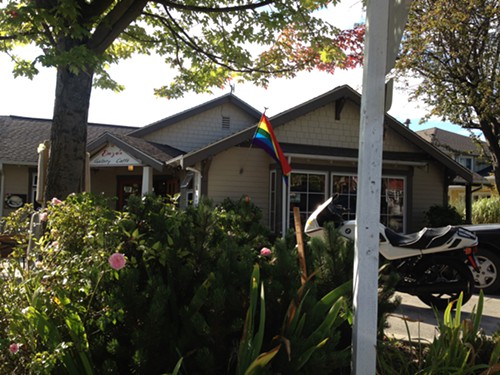 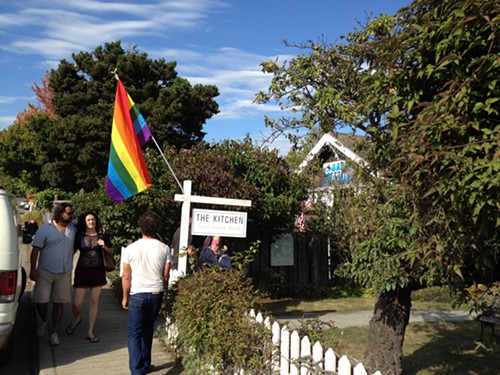 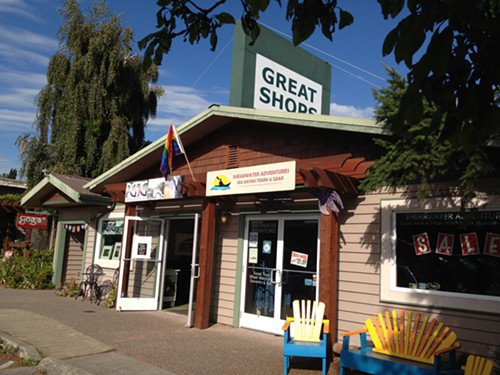 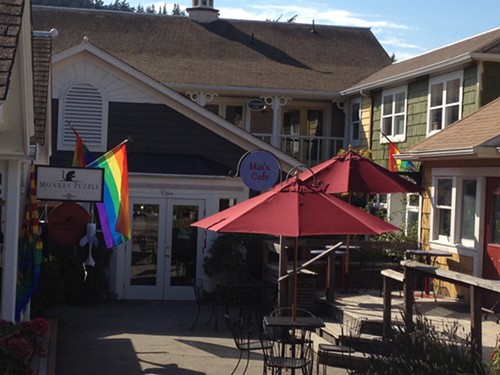 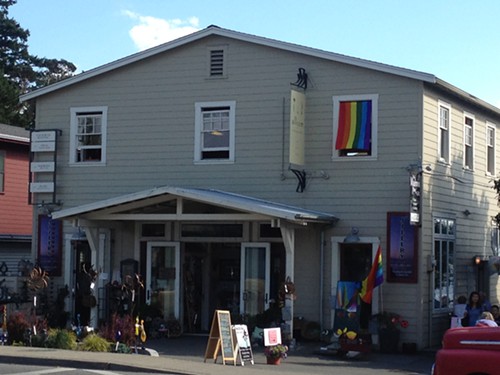 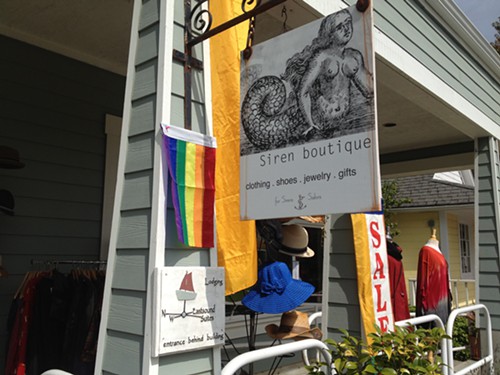 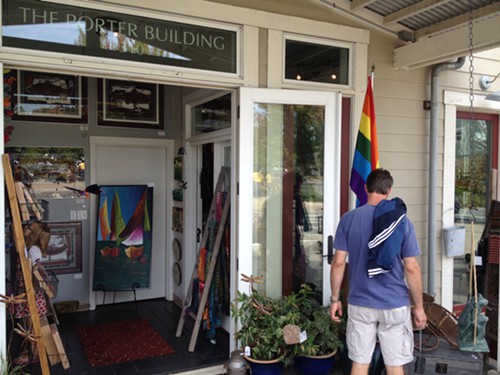 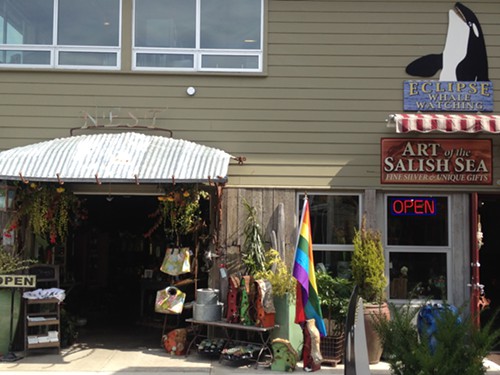 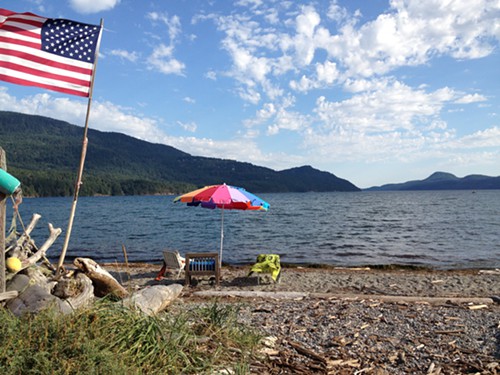