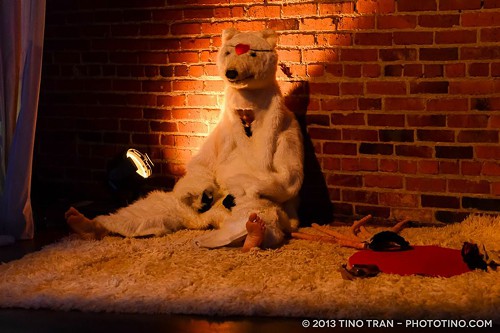 Velocity Dance Center threw a party last night, and in the process I got my own private basement dance party, sat in the back seat of a Subaru station wagon while two women had an awkward front-seat get-to-know-you exchange, and got caught on camera staring at the pierced nipples of a mysterious masked dancer.

The Big Bang Performance Party rang in Velocity's 2013-14 season by packing dancers, sculpture, performance art, music, and spoken word into its three-studio digs on Capitol Hill (and on the street and in the loading dock and in the basement). The result was kind of mind-boggling. I have a wicked cold and hadn't left the house all day so I thought I'd stay for half an hour, grab a Hilliard's tallboy to help my 10 pm Nyquil along and then trot on home to snuggle with my boyfriend—but that was before Dani Long got me all pumped up with his basement booty-shaking and oral history of the vogueing movement. Did you know it was invented in Harlem in the '80s as a way for gay men of color to express themselves, taken from the pages of Vogue magazine? I didn't, but got all learned up thanks to Dani. I wonder how much more I would have retained in high school if my history teachers had moved like that while lecturing about Reconstruction.

Velocity knows how to get people excited about their dancers. In one room, there were multiple things going on—multiple styles of art, paces, places from which to observe the goings-on. From a wooden slab covered with pillows, I watched Coriolis ensemble members Christin Call and Natascha Greenwalt Murphy dance around a netted sculpture suspended from the studio ceiling. Clad in pointe shoes, black underpants and alien-ish tops, Call and Murphy delicately tooled around the studio floor, dancing sometimes in unison, sometimes separately, sometimes chasing each other to the corners of the room, scaring the shit out of people who were coming out of the bar area with drinks in hand. Coriolis's frequent collaborator Jackie An sat on the floor near the dancers, playing electronic stringed instruments while at her back a man clad in a polar bear costume lolled against a brick wall. This was not an acid trip—it was just a lot of art in one room.

In another studio, Shannon Stewart and a group of dancers formed a mosh pit near the bar, traipsing around in a circle and alternatively throwing themselves at each other. I've been in a few mosh pits and have never seen one with so few people wearing pants, but then again I've never seen people mosh with this kind of grace and ability to head bang without making themselves dizzy and stupid. I would have stayed longer for that one but I am a delicate flower inclined toward migraines, so the strobe light chased me away and back to the room where a bird-like Eric Eugene Aguilar, wrapped in painter's plastic danced on the floor underneath a large knitted afghan tent. It'll be cool to see what these dancers, among a bunch of others who peppered the party with equally riveting performances, accomplish in the coming year under the guidance and protection of Velocity, an organization that is less a dance company and more like a hotbed of creativity that nurtures and supports dancers as they explore performing art to sometimes extraordinary limits. And speaking of extraordinary, the night was to culminate in a 11 pm Katie Kate performance but the delicate flower that I am needed to hit the hay before then. So I missed it, but not without sweet acid-trip dreams of pierced nipples and voguing aliens.

I love this shit.

Tags: Blogs Dance
The Stranger depends on your continuing support to provide articles like this one. In return, we pledge our ongoing commitment to truthful, progressive journalism and serving our community. So if you’re able, please consider a small recurring contribution. Thank you—you are appreciated!
CONTRIBUTE NOW