PRIMUS TAKE ON THE CHOCOLATE FACTORY
Primus @ Paramount Theatre
When a band’s been going for 30 years, it needs to change it up to keep from stagnating and slipping into insanity/inanity; for one example, look at Flaming Lips and their tackling of sacred-cow rock albums in their entirety. So it makes a kind of twisted sense that funky prog-rock smart alecks Primus would cover the soundtrack to the whimsical 1971 cult film Willy Wonka and the Chocolate Factory, as they did with their 2014 album, Primus & the Chocolate Factory with the Fungi Ensemble. Bassist/vocalist Les Claypool and company stretch out the super-sweet orchestral-pop trifles from Wonka and apply their show-offy, Zappa-esque chops to them. It’s a funny—and annoying, due to Claypool’s exaggeratedly goofy singing style—parlor trick that will take on a decidedly trippy tenor if the visuals spotted on YouTube clips from previous Primus concerts are any indication. DAVE SEGAL

HAVE YOU "POP DEPARTED" YET?
Pop Departures @ Seattle Art Museum
A survey of pop art from its mid-century inception to the present day, delineated into three groups. The first group uses the profanity of mass culture to invade high art (Andy Warhol, Roy Lichtenstein). The second, in the '80s, splinters into the craven (Jeff Koons), the critical (Barbara Kruger), and the revolutionary (Lynn Hershman Leeson, Nam June Paik). By the time Pop Departures hits the 2000s, with seven artists representing international perspectives in video, sculpture, photography, and installation, everything has exploded. The art is all over the place. Today's generation mimics our "culture of participation"—the way we can be scrutinizing one minute and indiscriminate the next.

DREAMY YET DISTINCT PAINTINGS AT ARTSWEST
Tim Cross and Mugi Takei @ ArtsWest
Both artists are painters. Cross's paintings are several feet large and "are created by transferring Laser and Xerox prints to silk using matte medium." Takei’s watercolors fixate on several distinct images. One is that of a woman lying prostrate, floating several feet about the ground, while a second woman rests a hand on her abdomen. 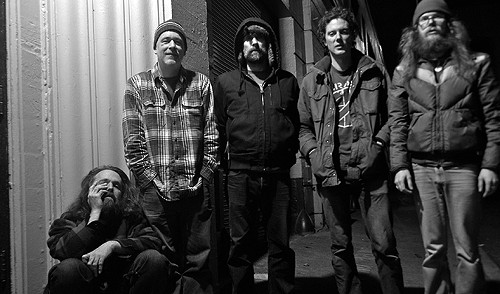 BUILT TO SPILL, PART DEUX
Built to Spill @ Showbox at the Market
A lot has been said and written about Northwest dad-core/“indie-rock” legends Built to Spill. If you’re unfamiliar with the Boise-based superband, they nearly patented a sound that would reemerge in countless groups after them: jangly, melodic, fuzz-pop guitar with earnest, regular-dude vocals delivered by a very bearded and plaid-ed songwriter. Since the early ’90s, Doug Martsch has written songs that are well-crafted and highly listenable, helping define “college rock,” even through their latest release, 2009’s There Is No Enemy. Sometimes expansive and spacey (“Randy Described Eternity”), most of the time armed with an ultra-singable hook (“Distopian Dream Girl”), and always emotionally direct (“You Were Right”), these songs are all reasons Built to Spill are one of indie rock’s greatest successes. BRITTNIE FULLER

FREE WINE, CUZ WHY NOT?
Free Wine Tasting @ Esquin Wine Merchants
Behemoth SODO wine emporium Esquin offers free wine tastings every Thursday and Saturday, with themes like "92 Points and Above," "Viva Argentina," and "Under $10 Specials." Sometimes winemakers join in, and snacks are not unheard of. Check their website to find out which wines they're uncorking.

Happy Saturday! Check out all that Seattle has to offer right here.