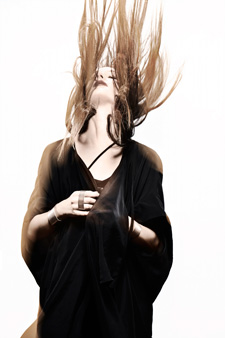 The greatest trick Zola Jesus ever pulled was convincing the world she was anything other than a damn pop star. Sure, she’s a bit more industrial and gloomy than your garden variety Adele, but she belts out a strain of synth-laden Goth & B that slots in nicely with radio’s current fixation on cloud atmospheres and screwy textures. It’s music fitting for either a vampiric romance or your next high-school séance, at once catchy, portentous, and adolescent in its torch-song bombast. Set your eye shadow to heavy and your cheeks to streaked. KYLE FLECK

Lonesome Shack and Co. @ Tractor Tavern
Lonesome Shack frontman Ben Todd must have signed a deal with the devil to get blues riffs this seductive, because with More Primitive, he dispenses them mercilessly. What’s more, someone with a record label (Alive Naturalsound Records) finally figured how good Lonesome Shack are. It might be a coincidence that it’s the same label that put out the Black Keys’ first record, but it also gets you a fair idea of Shack’s sound. Todd syncs his voice to those high notes seemingly without effort, and paired with drummer Kristian Garrard’s unflappable timekeeping, the whole thing makes for an addictive presence. Who says the devil’s all bad? GRANT BRISSEY

STUDIO 4/4 STARTS 2015 IN RAUNCHY PARTY MODE WITH JUSTIN JAY, AARON JACKSON
Justin Jay and Aaron Jackson @ Q Nightclub
Studio 4/4 kicks off 2015 with LA tech-house producer Justin Jay, the youngest addition to the DirtyBird Records roster. That means he emphasizes the raunchy side of this 4/4 genre, which, as you know, can come off as a tad stoic and ominous (not that there’s anything wrong with that). Anyway, JJ just wants y'all to get down and go wild on the dance floor, and he has the arsenal of sonic weapons to make that happen; check out Jay's remix of DirtyBird boss Claude VonStroke's crunchy, funky house jam “Sugar & Cinnamon.” You're probably gonna love Justin Jay. Eugene, Oregon's Aaron Jackson is renowned for his bass-oriented house productions and radically clever remixes of smash hits like Pharrell Williams's “Happy,” Bell Biv Devoe's “Poison,” and Basement Jaxx's “Where's Your Head At.” Jackson’s another guy who will spur you to flex your party muscles to their full potential. DAVE SEGAL

NOTHING SAYS SOPHISTICATED LIKE TAKIN' IN SOME VIDEO INSTALLATIONS
Screen Shots @ Northwest Film Forum
In conjunction with the Capitol Hill art walk, it's an arty evening of three video art installations by Shaun Libman, Patrick Luhrs, and others. KRISHANU RAY

TIME TO START ARBITRARILY FREAKING OUT ABOUT VOLCANOES
Alexandra Witze @ Town Hall
If you're at all like me, you'll read An Island on Fire: The Extraordinary Story of Laki, the Volcano That Turned Eighteenth-Century Europe Dark and then spend the next six weeks worrying about a similar calamity happening immediately. Then you'll forget all about it, because, if you're like me, you're a shallow idiot. KRISHANU RAY

Seeing nothing that tickles your fancy? Then tickle yourself over at our complete calendar, won't you?