Should NASA Name a Telescope After a Dead Guy Who Persecuted Gay People in the 1950s? 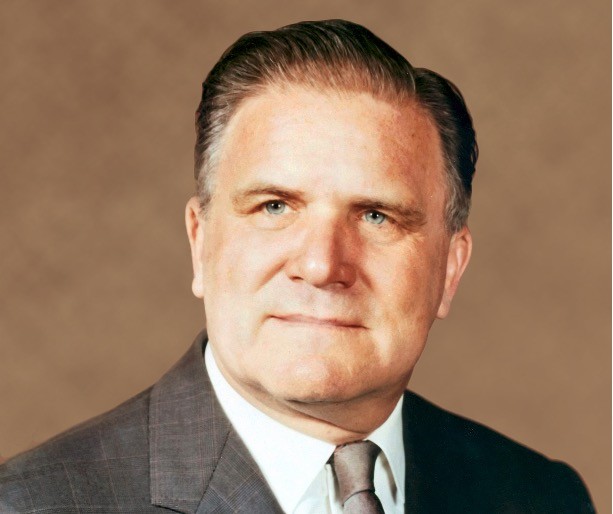 Maybe I'm suffering from outrage fatigue—which is a real thing but not a new thing and likely evidence of my privilege thing and definitely a thing that outrages some people—but I'm having a hard time getting worked up about this:

I would like to raise a slightly unusual issue which I have come across. The Hubble Space Telescope is to be replaced in 2020 with the James Webb Space Telescope. This is named for James Webb, an administrator of NASA from 1961 to 1968, responsible for the Mercury, Gemini and early Apollo programmes. That part is great. But before that he was with the U.S. Department of State and was responsible for ensuring that "communists, anarchists and homosexuals" weren't employed by the DoS. He had quite strong views in this regard. While I am all in favor of honoring people's legacies, I am not sure whether it would be appropriate to name a telescope after this man. I would love to hear Dan Savage's view on this.

James Webb was born on October 7, 1906, so Jimmy shares a birthday with me, Sherman Alexie, and East Germany. (We were all born on the same day, thank you, not in the same year.) And Webb, like almost everyone else who was an adult in the 1950s, didn't think too highly of homos. Here's what Wiki has to say about Webb's "public service" before John F. Kennedy appointed him to head NASA in 1961:

After World War II, Webb returned to Washington and served as executive assistant to O. Max Gardner, by then an undersecretary in the U.S. Department of the Treasury, before being named as the director of the Bureau of the Budget in the Office of the President of the United States, a position that he held until 1949. President Harry S. Truman next nominated Webb to serve as an undersecretary of state in the U.S. Department of State. Serving as Undersecretary of State during the Era of McCarthy, Webb was instrumental in implementing stringent personnel requirements intended to prevent suspected anarchists, communists and homosexuals from employment with the Department of State. Webb singled out homosexuals in a later report, noting "It is generally believed that those who engage in overt acts of perversion lack the emotional stability of normal persons."

Gay people are unstable perverts: That was definitely the prevailing belief at the time. That's what my parents and grandparents believed when Webb headed up NASA.

But before heading up NASA, Webb led a witch hunt at the Department of State that resulted in the "purging" of 91 homosexuals. Other federal agencies hunted down and fired "perverted" employees too. It was the height of the Cold War, and gays were seen as security risks—and we were security risks, thanks to those "stringent personnel requirements." (The fact that you could be fired for being gay made you a target for blackmail. It's a perfect example of circular logic: We need this anti-gay policy to protect us from gay people who are a security risk because of this anti-gay policy.) Daily Kos offers a good summary of this blot on our history here. One unintended consequence: the creation of a gay hero. Kos:

This chapter of American history is little known or discussed, but the reverberations in modern day politics are great and many. It was the genesis of one of the 20th century's most ubiquitous and indomitable LGBT rights activists, Dr. Frank Kameny, who was himself a victim of this purge. He was the first to actually fight back, attempting to petition the United States Supreme Court for redress (they denied his requested day in court).

In 1961 Kameny and Jack Nichols, fellow co-founder of the Washington, DC, branch of the Mattachine Society, launched some of the earliest public protests by gays and lesbians with a picket line at the White House on April 17, 1965. In coalition with New York's Mattachine Society and the Daughters of Bilitis, the picketing expanded to target the United Nations, the Pentagon, the United States Civil Service Commission, and to Philadelphia's Independence Hall for what became known as the Annual Reminder for gay rights. In 1963, Kameny and Mattachine launched a campaign to overturn DC sodomy laws; he personally drafted a bill that finally passed in 1993.[14] He also worked to remove the classification of homosexuality as a mental disorder from the American Psychiatric Association's Diagnostic and Statistical Manual of Mental Disorders.

So the first public demonstrations for gay rights in Washington, DC—a picket line at the White House in 1965—was the direct result of the anti-gay policies James Webb was charged with enforcing.

But back to the question at hand: Is it appropriate to name a telescope after James Webb? Perhaps not. But I don't think fighting this honor for the late James Webb—which recognizes his contributions to the space program, not his work at the State Department (where he destroyed careers and lives)—would be the wisest use of our time and energies as activists, shit-stirrers, and hell-raisers. Webb was no more bigoted than the average person in the 1950s and 1960s. This is not to excuse his bigotry or to minimize the harm he did. Webb didn't just ascribe to the prevailing anti-gay prejudices; he enforced them and, again, destroyed careers and lives in the process. But to go after Webb—to try to get his name taken off that new space telescope—while giving Harry S. Truman a pass seems hypocritical. It was the Truman administration, after all, that presided over the firings of gay men from the state department and other federal agencies during the Lavender Scare. And how many schools, libraries, parks, and streets are named after Truman?

We have so much to fight for right now, so much work to do, that going after a dead guy seems like a distraction we can't afford. It's also likely to be a battle we would lose. So I'm thinking we let this guy have his telescope.

Comments 23
Tags: Blogs LGBTQITSLFA
The Stranger depends on your continuing support to provide articles like this one. In return, we pledge our ongoing commitment to truthful, progressive journalism and serving our community. So if you’re able, please consider a small recurring contribution. Thank you—you are appreciated!
CONTRIBUTE NOW