Nine Questions for Sandi Doughton, Author of Full-Rip 9.0: The Next Big Earthquake in the Pacific Northwest

My husband—mah huzzben—e-mailed me a link "to something really scary" early on Monday morning. Someone probably sent you the same link at some point on Monday. Clicking the link took us all to a very scary piece in the July 20 issue of the New Yorker by Kathryn Schultz. ("The Really Big One: An Earthquake Will Destroy a Sizable Portion of the Coastal Northwest. The Only Question Is When.") I read Schultz's piece and, yes, it was scary. But I didn't learn anything I didn't already know—because two years ago I read author and Seattle Times science writer Sandi Doughton's book Full-Rip 9.0: The Next Big Earthquake in the Pacific Northwest. 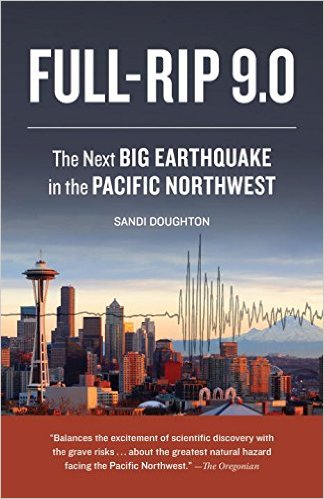 If Schultz's New Yorker essay left you wanting to know more about our region's history, seismic or otherwise, to say nothing of your odds of being squashed by a pancaking viaduct or a washed away by a monster tsunami, order yourself a copy of Doughton's book.

I was curious what Doughton thought of the New Yorker essay and the tsunamis it set off in Seattle's collective pants. Doughton was kind enough to answer a few of my questions.

Some people who’ve read the New Yorker about our overdue earthquake are talking about leaving Seattle. You literally wrote the book on it—Full Rip: 9.0: The Next Big Earthquake in the Pacific Northwest (Sasquatch Books, 2014)—and you’re still here. Why haven’t you moved away?

I was born in Oklahoma, so believe me, I’m happy to accept the extra margin of risk that comes from living in a seismically active part of the world. (Though with all the fracking, OK is a pretty rocking place these days.) The geologic forces that make the PNW prone to quakes are also what makes this such a beautiful place, with the Olympics, the Cascades, and all our gorgeous volcanoes.

Understanding the earthquake risk actually gives me a sense of empowerment, not helplessness. I’ve done what I can to prepare—kits at home, at work, in my car, emergency contact lists, easy fixes around my house. I pay attention to my surroundings and where I might take cover—but not in a jumpy, paranoid way. And I do what I can through my work at The Seattle Times to inform others and—maybe—create some momentum behind the kinds of major infrastructure upgrades we need to be investing in collectively.

Sandi Doughton. Photo by Janet Jensen.
I read your book when it came out and didn’t write about it then—forgive me—because I couldn’t deal with it. It was too terrifying. (I had to suspend my disbelief/terror to continue living here.) Are you annoyed that an article in a magazine produced in New York City seems to be getting more local attention than your book, written by a local writer, and published by a local publisher, about an impending local disaster? You have to be annoyed. I would be annoyed. Let it out.

I’m annoyed I didn’t get to write the New Yorker story and pull down a freelance fee that would probably have dwarfed my entire book advance. But, not to sound too Panglossian, I’m excited to see the issue going viral. Sometimes it takes an outsider pointing out the obvious to get things moving.

Books are longer than magazine stories—I just looked that up—so there are lots of terrifying facts that couldn’t fit into the New Yorker story that got into your book. Care to share one or two with Stranger readers?

Some of my faves: Nearly half the high-rise buildings in Seattle, Portland and Vancouver, BC were built before anyone knew we could get these megaquakes—and even current codes don’t require builders to factor in the duration of ground—shaking, which can be 5 minutes or more. Also, nearly 1,000 schools in Oregon have a high risk of collapse in a major earthquake. Most of Seattle’s public schools have been retrofitted—but lots of other districts haven’t done much, and there’s been no statewide survey of school safety in Washington.

A few could collapse, but most won’t. Even old high rises were built to sway, which helps them stay upright in a quake. But older towers are more likely to sustain serious structural damage than newer ones.

The risk hasn’t changed, but it’s cool to see an earthquake early warning system being tested in California. With enough money, it will be extended along the West Coast. In Seattle, we could get 1-3 minutes warning before the ground starts shaking hard from a coastal megaquake. Plenty of time to duck and cover, or...

Well, just think of what you could do. (Conan O’Brien had a moderately funny take on it.)

Portland, Seattle, Vancouver—which city is going to get it worse?

Definitely Portland. They didn’t consider quakes in their building codes until the late 1980s, and most of those bridges downtown are old and rickety.

The restaurant at the top of the Space Needle or the observation deck on top of Columbia Center—which one would you be in when it hits?

Space Needle all the way. I interviewed one of the guys who helped design it, and he told me they ordered the strongest steel available, and nobody gave them any guff about the cost. It’s also got redundant design, which few buildings have anymore. The legs hold it up, and so does the core. But it will be a wild ride in there.

The New Yorker quotes a FEMA official who says that “everything west of Interstate 5 will be toast.” So all of us up here on Capitol Hill—we can see I-5 from here but we’re to the east of it—are going to fine, right? We don't have anything to worry about, right?

It’s true that the shaking weakens with distance from the fault, but I wouldn’t count on that tiny margin to save you. What I think the FEMA official meant is that a lot of our infrastructure in Western WA—utilities, roads, some bridges, brick buildings—will be wrecked, and access to the coast will be cut off.

I'm kind of disappointed you didn’t ask me about sex! But, sadly, I probably know more about earthquakes.

You want a bonus sex question? Let's say two people are having sex when the full rip 9.0 megaquake hits. Should they stop and take cover? Or should they keep going because this might be the last time they ever get to have sex? Would your advice be different if they were, say, on top of Capitol Hill versus in a cabin on the beach in Seaside, OR?

On Capitol Hill, in a relatively new building with no chandelier or mirror or glass light fixture hanging over the bed, I say carry on. The motion from the quake might be a pleasing addition. In Seaside, give it up, put on your shoes and run for your life because the tsunami is coming.

Comments 39
Tags: Blogs City Panic Death
The Stranger depends on your continuing support to provide articles like this one. In return, we pledge our ongoing commitment to truthful, progressive journalism and serving our community. So if you’re able, please consider a small recurring contribution. Thank you—you are appreciated!
CONTRIBUTE NOW