This Year's Hempfest Through the Eyes of an Anthropologist

By the end of his first day at Hempfest, anthropology student Joe Orman was shivering and starting to turn blue. He had come from the University of Rochester to study whether legalization was changing cannabis culture in Washington State—but Friday had turned into one long thunderstorm, which dumped more rain on Seattle than the city had seen all summer and chased away herds of festival-goers. Orman stuck it out anyway.

“I’m asking people if they’ve seen changes in the community,” he said while we huddled under an abandoned vendor canopy, our raincoats and notepads dripping. “Has it gone from an activist festival to something more commercial? There are 10 different vape places right over there,” he said, gesturing to a few of the hundreds of vendor booths at Hempfest. (This year, vendor spots went for $350 on the low end for a blanket space and $1,399 on the high end for a tent in a high-traffic location.) “Or has it always been like that? Is this the first year vendors have outnumbered the activists?” By Sunday, he hoped to have an answer. 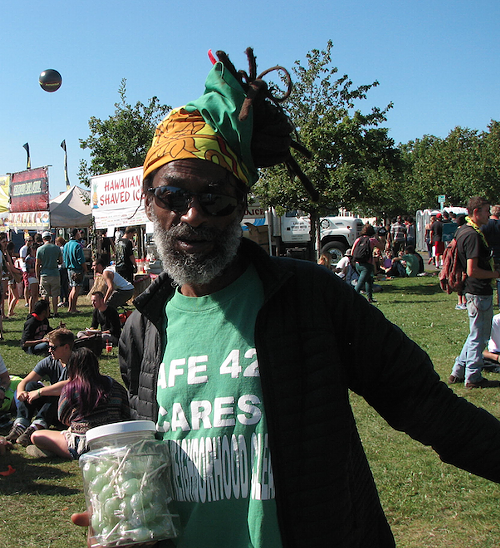 Aminifu from the First Church of Rasta in Los Angeles. bk
This year’s Hempfest brought some of the usual sights: Friendly strangers sharing joints; gaggles of voluble pot-smokers and few older, taciturn Rastafarians; families who’ve been coming for years (shortly after 4:20 on Sunday, one 20 year-old passed a pipe to her parents and said she’d been at every Hempfest since she was born); the occasional herd of red-eyed teenagers bumbling down a pathway while eating French fries or an enormous cherry pie directly from the tin.

But recent tensions between the recreational and medical constituencies—which were exacerbated this year after lawmakers in the Republican-dominated Senate clamped down on medical marijuana’s longstanding but less-regulated marketplace—were evident throughout the weekend.

During one “Hemposium” panel on Sunday afternoon, attorney Rachel Kurtz lamented “misguided people” in the recreational industry “thinking an unregulated medical market was undermining their ability to make a profit…. Medical isn’t the problem. The reason people aren’t making money is because 502 [Washington’s 2012 initiative to legalize marijuana] is so severely regulated.” The audience cheered in agreement. Roughly an hour later at the main stage, entrepreneur AC Braddock of Eden Labs avoided mentioning medical marijuana, but warned the crowd that only the recreational cannabis industry could adequately inform the public about consumer-health issues such as pesticide contamination.

One thing everyone seemed to agree on: Hempfest is still relevant, both as a cultural celebration and a place to agitate for legalization across the United States. “It ain’t over ‘till it’s over!” the white-bearded Rick Cusick, associate editor of High Times and a board member of NORML, bellowed from the main stage. 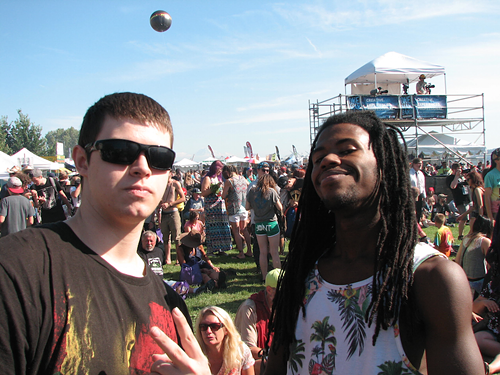 Pals on Sunday at 4:20. bk
Pepper and Chloe, two young women from Pennsylvania who sat under a pedestrian overpass during Friday’s storm, agreed. “Until it’s legal everywhere, it’s still necessary to protest discrepancies in the law,” said Chloe, who recently moved to the Seattle area. “And just because we have recreational stores doesn’t mean we need to shut down medical stores. Patients should have access to affordable medicine.” Both said they knew medical-marijuana patients, including a friend of Pepper’s who uses cannabidiol (CBD) to control seizures. “Her mom got her the oil,” Pepper said. “If she were to be caught with that, she could go to jail.” (In May, Senators Dianne Feinstein and Chuck Grassley asked the Department of Justice to reevaluate federal prohibition of CBD.)
None of the users I met said legalization had had much of an impact on their marijuana use. “It’s the same,” said Ralph, a young man from Bremerton. “You just don’t have to trip out on cops as much.”


But a few of the vendors said legalization had brought them to Hempfest for the first time. 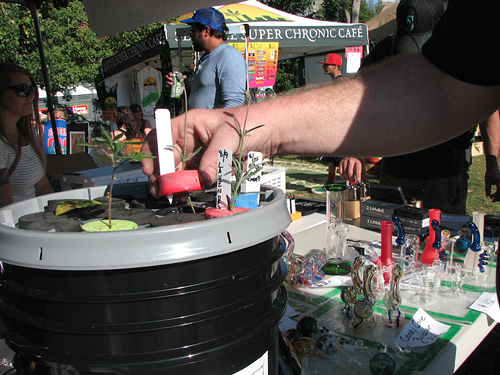 In a quieter corner of the festival, Michael McGuire of Mad Garden Supplies showed off his “cloning bucket”: a large drum with a lid holding that holds plant clippings (on that afternoon, lavender) and gently spits water onto their undersides, encouraging the clipping to grow roots. “You use a little cloning gel on the shoots,” he said, “and 12 days later you come back and there will be roots.”

Sunday afternoon was hot and bright, with people looking for shelter from the sun instead of the rain. The anthropology student was beaming—the folks at Hempfest were even friendlier than he’d expected and he had collected plenty of data. “Anthropologists study intersectionality,” Orman said, and Hempfest’s nexus of celebration, commerce, and activism involved a whole network of cultural issues: prison reform, Black Lives Matter, veterans’ affairs, public health, agriculture. “Marijuana is a great way of showing how social policy can change the law,” he said. “People here really want to talk about three things—culture, political activism, and community. Hempfest really brings those together.” Just then, a young woman walked past and gave him a random high-five.

Orman’s smile grew even wider: “See what I mean?” 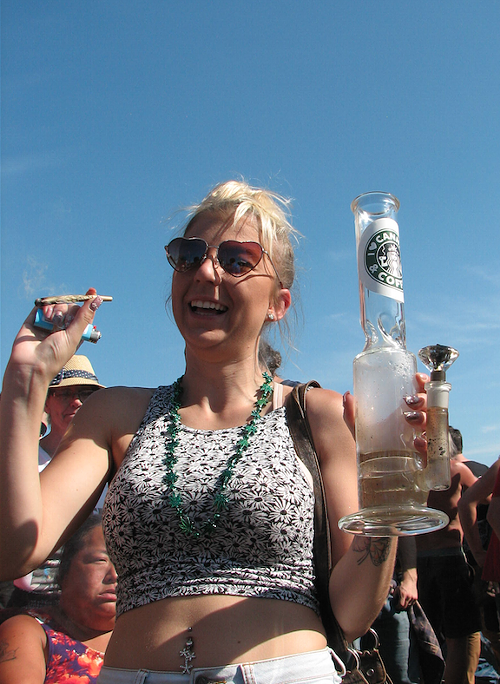 Another satisfied customer. bk
Comments 3
Tags: Blogs Weed
The Stranger depends on your continuing support to provide articles like this one. In return, we pledge our ongoing commitment to truthful, progressive journalism and serving our community. So if you’re able, please consider a small recurring contribution. Thank you—you are appreciated!
CONTRIBUTE NOW