Asked and Answered: Why Do Seattle's Sidewalk Clocks Mark Four with "IIII" Instead of "IV"? 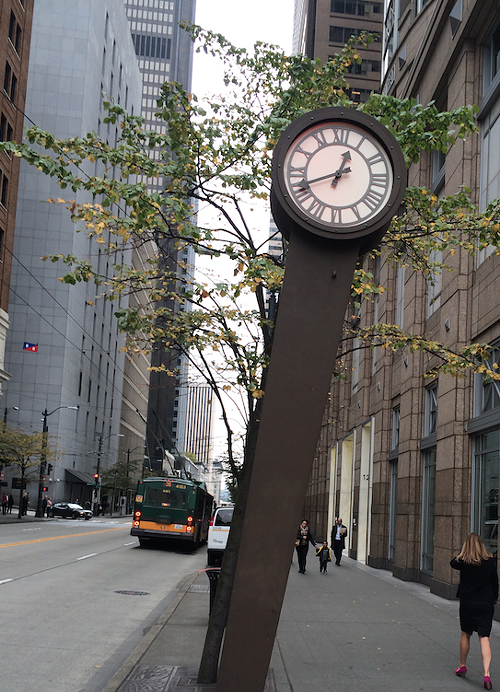 A clock on Third Ave whose time-telling abilities seemed like a life-or-death matter to my teenage self. bk

If you're anything like me, you spent a few teenage evenings sprinting through downtown Seattle to catch a late-night ferry to the Kitsap Peninsula—because if you missed the 10-something, the next one didn't leave until sometime around 2 a.m. and you'd be in deep, deep shit—checking all the clocks you sped past on the sidewalk to measure your progress and update your fear quotient. And on one of those wild nights when you were doing stuff you'd think about ruefully in church that weekend, you noticed that the clocks with Roman numerals marked four with "IIII" instead of "IV."

But you were in a hurry, promptly forgot about it, allowed years to pass as if in a dream, went to college, fell in love, fell out of love, lived in several different cities, then came back to Seattle, and only remembered that question today as you were walking downtown, looking at clocks and reminiscing about your lost years.

Then—assuming, again, that you're anything like me—you tried to find the answer in your favorite book: A Book About a Thousand Things. And goddamn if it didn't contain the best non-answer answer. 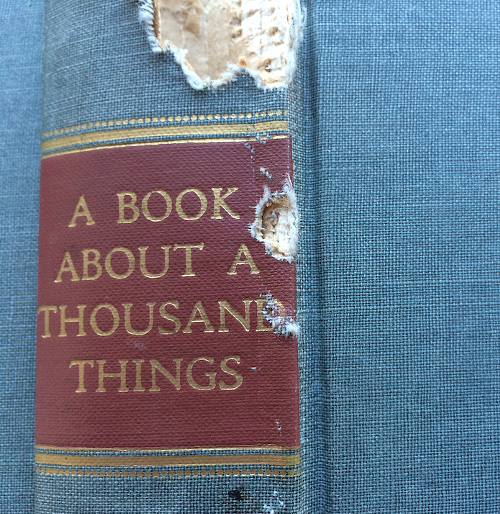 I nominate this book to replace the Bible for weekly, out-loud reading in groups. Who's with me? bk

I did look on the internet as well, which also lacked a definitive answer, but A Book About a Thousand Things has the best apocrypha on the subject. 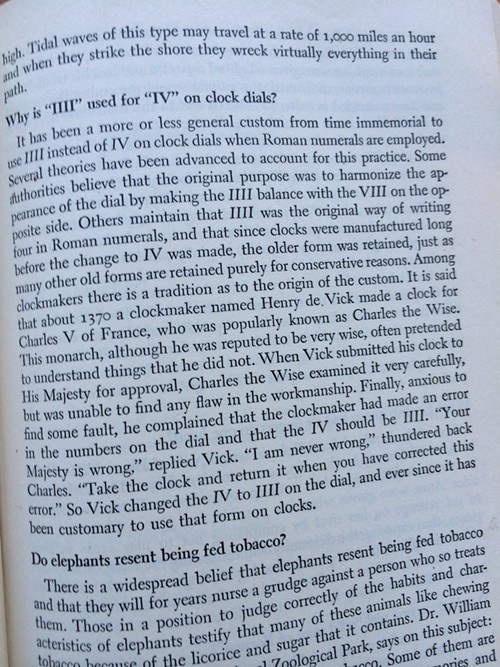 And here's the text in a more pixel-friendly form:

It has been a more or less general custom from time immemorial to use IIII instead of IV on clock dials when Roman numerals are employed. Several theories have been advanced to account for this practice. Some authorities believe that the original purpose was to harmonize the appearance of the dieal by making the IIII balance with the VIII on the opposite side. Others maintain that IIII was the original way of writing four in Roman numerals. and since clocks were manufactured long before the change to IV was made, the older form was retained, just as many other old forms are retained purely for conservative reasons. Among clockmakers there is a tradition as to the origin of the custom. It is said that about 1370 a clockmaker named Henry de Vick made a clock for Charles V of France, who was popularly known as Charles the Wise. This monarch, although he was reputed to be very wise, often pretended to understand things that he did not. When Vick submitted his clock to His Majesty for approval, Charles the Wise examined it very carefully, but was unable to find any flaw in the workmanship. Finally, anxious to find some fault, he complained that the clockmaker had made an error in the numbers on the dial and that the IV should be IIII. "Your majesty is wrong," replied Vick. "I am never wrong," thundered back Charles. So Vick changed the IV to IIII on the dial, and ever since it has been customary to use that form on clocks.

I love the image of Charles the Wise examining an exquisite clock, looking for something to complain about. (Charles the Wise was succeeded by his son, Charles the Mad, who had serious-sounding bouts of mental illness during which he fled from imaginary enemies, believed he had an imaginary family, and thought he was made of glass.)

Anyway, while flipping through Book's introduction, my eyes landed on this passage: "In the broad sense, there is no such thing as a trivial fact. A chain is no stronger than its weakest link and all facts fit somewhere into the great scheme of things."

Amen, Book About a Thousand Things. You've never ceased to amaze me.

Comments 17
Tags: Blogs History
The Stranger depends on your continuing support to provide articles like this one. In return, we pledge our ongoing commitment to truthful, progressive journalism and serving our community. So if you’re able, please consider a small recurring contribution. Thank you—you are appreciated!
CONTRIBUTE NOW