Seattle Meowtropolitan Cat Cafe Is as Depressing as a Strip Club

Yes, that woman in the far right is wearing a cat jumper. And yes, they're all having the time of their lives. The cat, Pink, just woke up from a nap. Mary Seton

I walked into Seattle's first and only (for now) cat cafe expecting to be greeted by 40 mewling furballs all wanting to make biscuits in my sweater. That didn't happen. Instead I was met by three smiley baristas hanging out in a slick, tastefully(?) forest-themed cafe. There was a short and simple list of drinks behind the bar, and a few pastries behind the glass, all unconscionably void of any cat puns.

The baristas asked if I had a reservation. When I answered in the affirmative, I was told my drink (dragon green tea) came with the purchase reservation. Score. Kinda. It costs $10 for an hour in the cat room, and I had to make reservations two weeks in advance. Turns out that hanging out with cats in a commercial setting is not a spur-of-the-moment activity. You have to plan this shit out. You're going to have to anticipate your need for happiness.

Quick layout of the joint. The Seattle Meowtropolitan is split into two zones: 1/4 of the space is a cafe where you order stuff and 3/4 is the cat lounge. When you walk into the main entrance you can order your drinks and snacks and post up on a little bar while you wait to enter the lounge. From the bar you can see the cats at play through a large window. When it's time to enter the lounge, you walk into a sort of airlock where you have to use hand sanitizer and read a bunch of cautionary signs.

A few moments after entering the too-sterile (good for the cats, bad for the vibes) cat lounge, I stepped on a cat toy and sent it flying. The plastic rattle ball pinked off a window and I looked around to see if anybody noticed my goof. Everyone seemed to be too busy turning into five-year-olds, slowly and cautiously approaching the eight or so cats who were sleeping beds or rubbing their cheeks against the faux exposed stone interior or digging their talons into wall-mounted claw posts.

I bought this big ass cat-caroon with the $3 I would have spent on my drink. Shoulda got pistachio, but the chocolate was serviceable. Mary Carmichael

Andrew Hsieh's cat cafe officially opened on the weekend of December 19, his first and only business project. He moved here 2007, went to school at UW, and started the place after working a job he didn't really care for.

Hsieh told me he was from Taiwan, where he claims cat cafes started. "There's a bunch of them in Asia," he said, "But I didn't think it wasn't possible in America." Then he saw news of a pop-up cafe in New York, and another permanent one in San Francisco. After doing a little research, he saw that nobody was doing a similar thing in Seattle, so he thought, "Why don't I do it?"

Thus began the Seattle Meowtropolitan. So far, it's been well-received. "I just looked at the calendar this morning: the next two weekends are booked up. But there are still a few spots mid-week," Hsieh said.

This is Andrew Hsieh, owner of the Seattle Meowtropolitan. He's holding a cat who has no name so death cannot find it. (Confession: The cat has a name, I just forgot.) Mary Seton

Hsieh claims that people have been "mostly" respectful of the cats. "A lot of people try to hold the cats when they don't want to be held. Not every cat is very docile, and we wouldn't want people to get accidentally scratched or bitten," he said, before adding, "Younger children require more supervision."

Right now the cats belong to a regional facility in Kent, but the cafe is looking to adopt five cats for keepsies, in addition to several more for customers to adopt. They'll be working out / finalizing the adoption process sometime in the middle of January.

Though the Seattle Meowtropolitan has only been open for a few weeks, they've already had to deal with illness among the cats. A kitty cold swept through last weekend, for instance, knocking out a few felines. "We've had to do extra sanitation," Hsieh said. "If one of them has a symptom, we isolate them so the flu doesn't spread. We have protocols in place to deal with this stuff, but we just didn't expect to have them happen so soon." Workers usually do deep-cleaning disinfection every week, but recently Hsieh's had the crew do it every day. 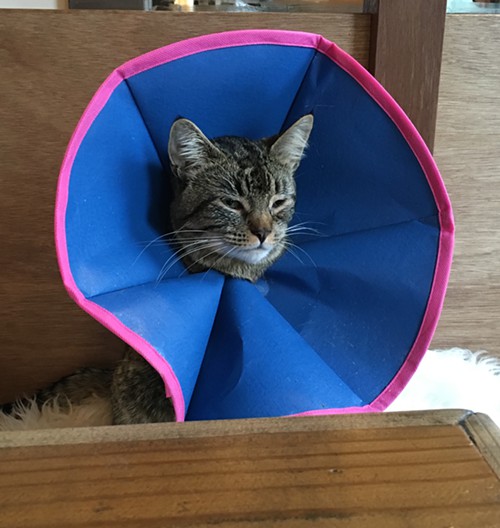 This is Django. He's wearing a collar so he won't scratch his eye. Poor guy got an infection. Mary Seton

As I sat on a faux sheepskin rug that the cafe put down to make the benches more comfortable, I had many thoughts about the strangeness of the cafe. I felt deeply unsatisfied for some reason. I felt creepy, and I felt as if the people around me were creepy (except for the workers, they were all super cool!). I think I know why.

In life, cats are a bonus. When you walk into a used bookstore and there's a couple orange tabbies walking around, you like it. You might think: "There's cats in this bookstore. And here I was only expecting books! But there's also cats!" You get the sense that you're on their turf. They own that spot. Ditto when walking into someone else's house. "Oh sweet! You have a cat! What's it's name? Frances? Oh, that's a nice name." And then the cat walks all over you and loves you and you pet it and it's nice.

But when cats are the point, they're disappointing. It's the same disappointment I feel in a strip club. A wave of depression crashes over me when affection is reduced to a transaction, especially because my capacity for affection is much greater than the size of my wallet.

That said, here's a bunch of supercute cats: 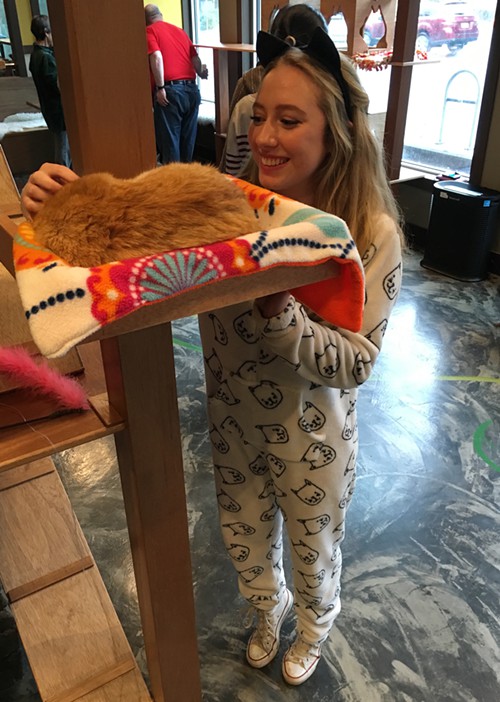 This is Bailey. She can't have cats right now while she's in school, so she uses the Seattle Meowtropolitan to get her "cat fix," she told me. Mary Seton 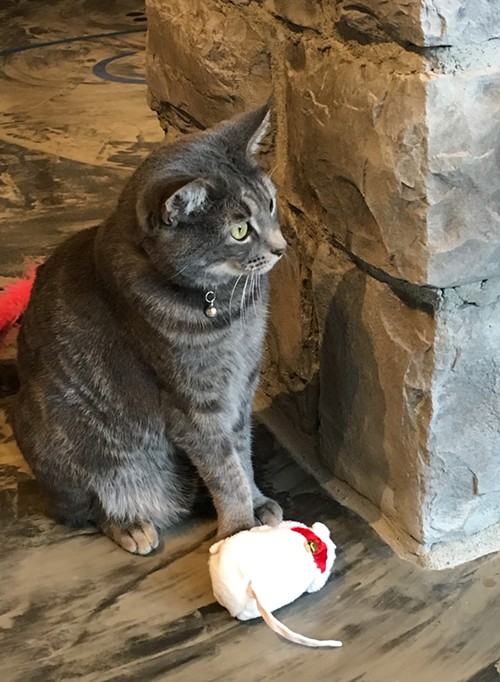 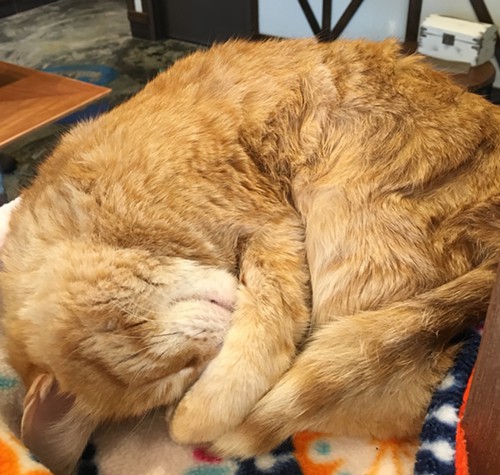 All these cat photos are making me so sleepy, like Pink, pictured here, sleeping. Mary Seton
Comments 23
Tags: Blogs Cats