"Huskies For Trump" organizer Chevy Swanson, far right, sits with a friend and some snacks as they wait for other Trump supporters to arrive. Alex Garland

A Trump rally yesterday at Red Square brought out a paltry 6 or 7 Trump supporters, and more than 75 students and activists who came to protest Trump and his rhetoric. Other students could be seen milling around the demonstration but when approached replied they either came for the "spectacle" or the "free snacks." The snacks, provided by "Huskies for Trump" organizer Chevy Swanson, consisted of a case of Flaming Hot Cheetos and two flats of mixed-variety Shasta soda, which Chevy offered to the counter-demonstration over a megaphone as they stood across the square. 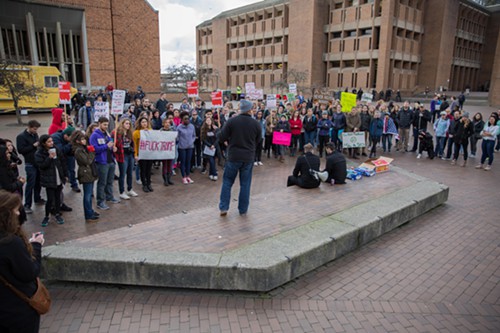 Swanson, the Huskies for Trump organizer, is an 18-year-old sophomore currently studying computer science at the University of Washington. Other than "voicing his opinion," this is Swanson's first show of support for the Trump campaign. When asked why he thought Donald Trump would make a good president, he said, "I don't think he's going to back down to anyone, honestly, I that's what we need right now. We need someone who's going to say what he wants to say and he's not going to take anything from anyone." He mentioned ISIS, he mentioned refugees, he mentioned a "culture clash" and the threat of "terrorist attacks... We need to let people in, but be safe...I don't think we should just blindly let people in." 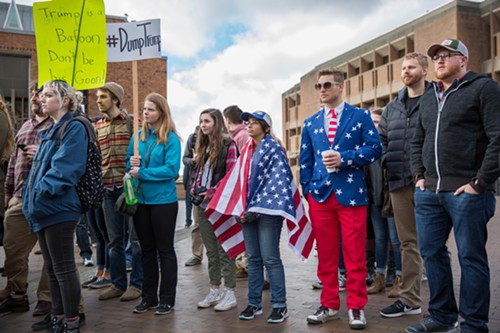 One counter-demonstrator, William, who showed up to the rally in an American flag suit, came "because I'm against everything that Trump stands for and his supporters stand for...we can't let them take over the patriotism of our country. I think it's wrong that they're rallying around our flag." 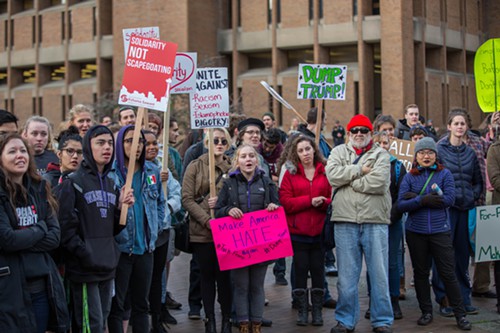 The counter demonstration brought out students, UW's Black Student Union, activists with Socialist Alternative, and a variety of community leaders and organizers. Palca Shibale, an undergrad at UW and an organizer with the Black Lives Matter movement, spoke to the crowd through a megaphone saying, "We will not stand for any kind of discrimination happening on our campus."

Shibale, who helped organize the counter-demonstration, said, "There's been a lot of hate speech, a lot of racism, a lot of sexism, a lot of Islamophobia happening with Trump rhetoric and in specificity with the 'Huskies For Trump' [Facebook] page, where a lot of black and brown folks and women have been abused...this rally and Trump rhetoric in general does not fit in line with what we want the UW community to look like. It is important for us to come out and resist in any form possible, because this rhetoric is violence to our community. It shows in police brutality, it shows in racism. There are body counts, literally, attached to Trump rhetoric. It's very important that there are any and all forms of resistance to this." 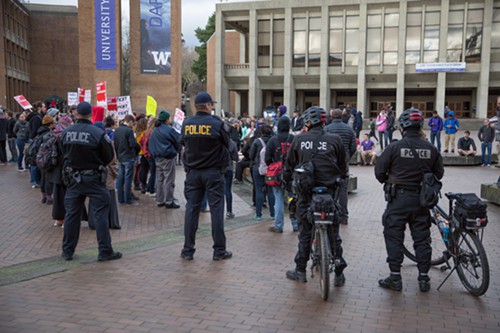 Ed Taylor, vice provost and dean of Undergraduate Academic Affairs at the University of Washington, was in attendance. "I came to support our students," he said. "We want to make sure our campus is a place where students voices are being heard, where students can take positions about issues that matter, but are doing it in a way that's respectful. This is not a place where there should be words of hate and words of provocation for the sake of provocation, but to the extent to which students are engaging thoughtfully and critically around important issues, then I want to support that and I want to make sure our students are safe."

Campus police maintained a heavy presence throughout the event, with officers standing at the edges of the counter demonstration during the one-hour rally and two bicycle units watching from nearby. Several police vehicles and a mobile command unit were also spotted.

The anti-Trump crowd, nearly encircling the vastly outnumbered pro-Trump group, was vocal, but peaceful. The pro-Trump rally was generally quiet, however one supporter attempted (and was unable) to describe Trump's foreign policy adequately enough for the crowd, and was quickly booed off stage. Although there were not quite the numbers Trump supporter Chevy Swanson was expecting (he told us he expected "30 to 40" Trump supporters to show up), at least he brought enough snacks to share. 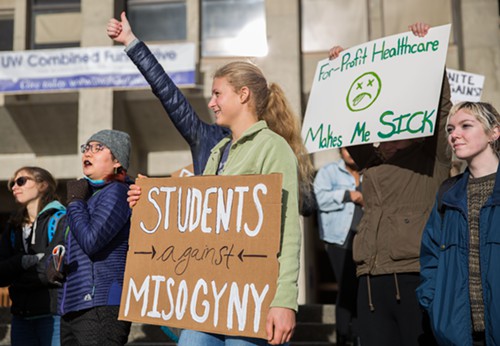 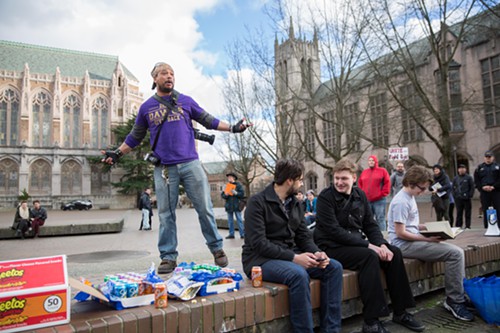 Activists explain to Trump supporters why they arrived to counter with their own demonstration. Alex Garland 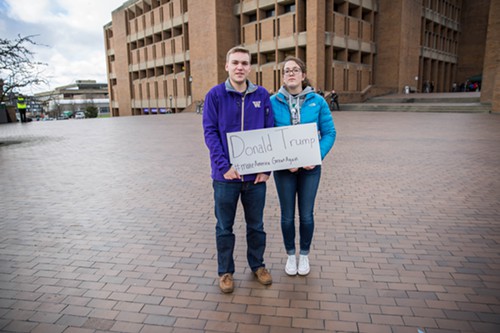 Trump supporters stand alone and away from the counter demonstration as they listen to Black Lives Matter activists tell them why they shouldn't support Trump. Alex Garland 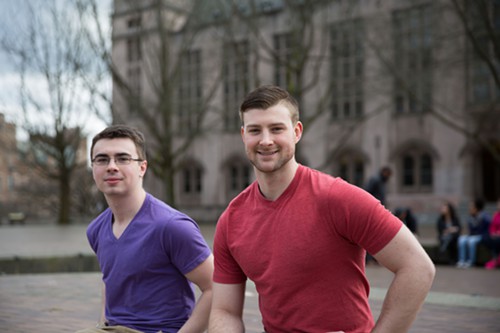 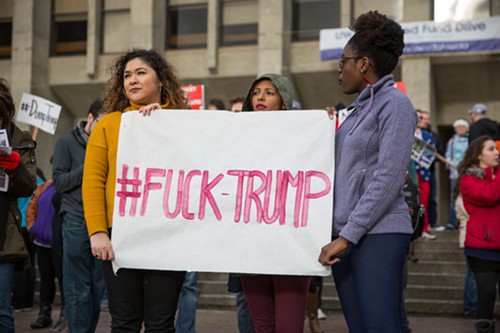 Chevy Swanson speaks to UW police before supporters of the "Huskies for Trump" rally begins. He had been expecting 30 to 40 Trump supporters to turn out, but only 6 or 7 did. Alex Garland
Comments 41
Tags: Blogs 2016
The Stranger depends on your continuing support to provide articles like this one. In return, we pledge our ongoing commitment to truthful, progressive journalism and serving our community. So if you’re able, please consider a small recurring contribution. Thank you—you are appreciated!
CONTRIBUTE NOW