If you walked past the Seattle Central College campus this afternoon, you may have noticed a giant planet sitting on the sidewalk. That's because it's Earth Day! EARTH DAY! EARTH DAY! And Earth Day is why SCC students hosted a star-studded, climate-focused rally this afternoon.

Mayor Murray opened remarks for the student-organized event, though Cecile Hansen, chairwoman of the Duwamish tribe, which is still seeking federal recognition, was supposed to open. (She had a last-minute issue with logistics.) Murray used the opportunity to promote something called the Equity and Environment Initiative, a partnership among the city, community groups, and private organizations to advance environmental justice goals.

Good for the city, but also, duh: Communities of color, which are often exposed to the heaviest concentrations of air pollution and the worst effects of climate change, should be central players in the city's environmental pursuits.* (And every city's environmental pursuits, for that matter. We shouldn't have to give politicians cookies for doing this.) The mayor's initiative creates a new position in the Office of Sustainability and Environment to lead the project, which will be filled by Sudha Nandagopal—she comes from the environmental justice position at Seattle Public Utilities. 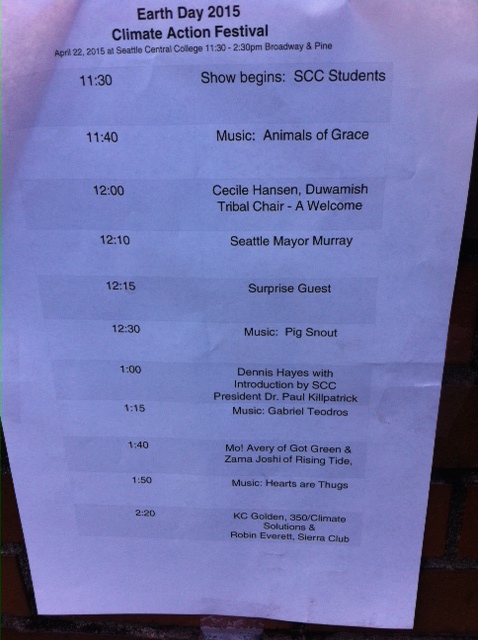 Please direct your attention to Denis Hayes, organizer of the first-ever Earth Day, as well as Pig Snout, a rock band made up of a Tacoma dad and his two small children. Pig Snout is insanely good. SB

Speaking of Shell, a man in a suit pretending to be vice president of Shell public relations took the solar-powered podium not long after, inviting folks to attend a demonstration oil spill on Sunday at Myrtle Edwards Park. The executive was, of course, Mike Bonanno (whose real name is Igor Vamos) from the Yes Men, and the event in Myrtle Edwards Park is an anti-Shell rally hosted by Greenpeace and a coalition of local environmental groups. Somehow, though, a few in the crowd didn't recognize him and tried to shout him off before his co-conspirator Andy Bichlbaum (real name: Jacques Servin)—who was playing a concerned citizen—took the mic and announced the Paddle in Seattle kayak protest against Shell on May 16.

"I basically wanted to promote this kayak blockade thing," Bichlbaum told me after the brief performance. He hung out with the kayak organizers last night, he said, and said it was really exciting to see the grassroots movement gripping people locally.

"A lot of NGOs and activist organizations think too strategically sometimes," Bichlbaum added. "Right now we're facing a system that's utterly and totally corrupt, and where Shell can spend billions of dollars to get what it wants. Our little strategies aren't necessarily going to work unless we get direct and difficult to deal with: direct action."

The Yes Men, who also helped stage a viral and satirical Shell event at the Space Needle in 2012—the last time Shell tried to drill in the Arctic—could be coming back in time for the festival of resistance in mid-May. But as of today, plans have not been finalized.

Oh! And guess who else attended the climate rally? Four out of the six Greenpeace activists who scaled the Polar Pioneer rig and stayed aboard for six days on the high seas. They seemed happy to be on solid land again. We'll be catching up with them later this afternoon.

*Mainstream environmentalism has a white privilege problem. This is a big impediment to progress and needs to be addressed. Jacobin's Alyssa Battistoni has an interesting piece on why lefties need "more voices and sharper critiques that put our analysis of power and justice at the center of environmental discussions."