Right as I was walking up to Cinerama, there was Jinkx Monsoon, standing in the street. Photo by Me

"I love Cinerama. It makes you realize how shitty other movie theaters are."
—The guy next to me.

"Fuck you, bitch, for putting me in this position!"
—Mama Tits, introducing Jinkx by telling a story about how when Mama Tits was hosting drag night at Julia's, she worked really hard to get Julia's to hire Jinkx, and eventually they did, for Mama Tits' job. And now Mama Tits had to "host opening night of your movie, fucking bitch!"

"Here's to the ladies in drag, oh shit, shit!"
—Jinkx Monsoon revealing her inner monologue right after she sang a version of "Ladies Who Lunch" from Company, with all the words changed to be about RuPaul's Drag Race. "Heres to the ladies in drag..." she began, but then Jinkx got her verses messed up and sang them out of order. Because she's a genius, she converted the fuck-up into a virtue, making the audience (who probably didn't get the Sondheim reference in the first place) roar with laughter.

"It's really intimidating to be here with all of you to watch a home video about me."
—Jinkx Monsoon looking out across the crowd

"It's kinda like a Pretty Woman story but I haven't found a billionaire yet. Maybe that was RuPaul and I fucked it up."
—Jinkx Monsoon on her life so far

"I recently stopped drinking when I perform, and I ramble even more, if you can believe it... Recently I gave a 20-minute lecture on douching. I mean enemas. Your butt. I'm doing it again."
—Jinkx Monsoon on her rambling ways with a microphone

"I don't often mix my blood family with my chosen family." Pause. "I don't mean blood like some weird cult thing."
—Jinkx Monsoon as she handed her non-alcoholic beer to her brother Jeremy to hold, so she could perform another number before the movie started.

"Detox said she wanted to fuck Jacob, so it gets weird sometimes."
—Jinkx Monsoon referring to a Drag Race costar (Detox) and Jinkx's youngest brother (Jeremy), who was in the audience.

"I had the biggest crush on him and all that came out of it were weird videos."
—Jinkx Monsoon on her friendship with Drag Becomes Him director Alex Berry. 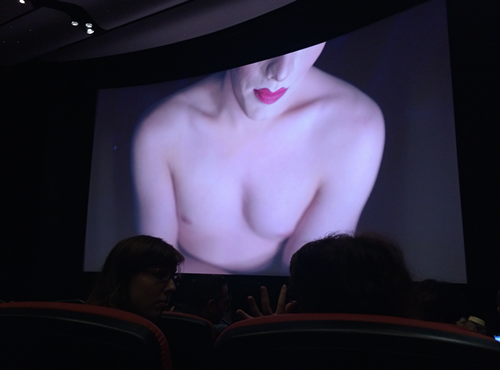 "I grew up in a lioness den."
—Jinkx Monsoon on her mom, her aunt, and her grandma, who assumed all child-rearing after Dad disappeared.

"I swear to god he's a karaoke champion and he looks like something out of a Rob Zombie movie."
—Jinkx Monsoon on her dad.

"That's the end of my boring talk, I'm going to drink my non-alcoholic beer and sit down."
—Jinkx Monsoon after performing THREE numbers, right before the movie started.

"Not many 23-year-old boys make such a good 40-year-old woman."
—Jerick Hoffer, in the earliest seconds of the movie, applying makeup

"I probably wasn't the best father. I was never there."
—Jinkx Monsoon's dad in the movie.

"I could make fun of myself in a way I had never thought of before. I wouldn't have started doing Little Edie impressions if I hadn't started smoking [weed]."
—Jinkx Monsoon talking in the movie about what happened after she smoked weed for the first time at age 22.

"I'm looking in the mirror and I don't see Jerick anymore. I'm like: Who is that woman looking at me?"
—Jinkx Monsoon toward the end of the movie, commenting on an extremely true thing, which is that something supernatural and witchy happens the moment Jerick puts on a wig and makeup. 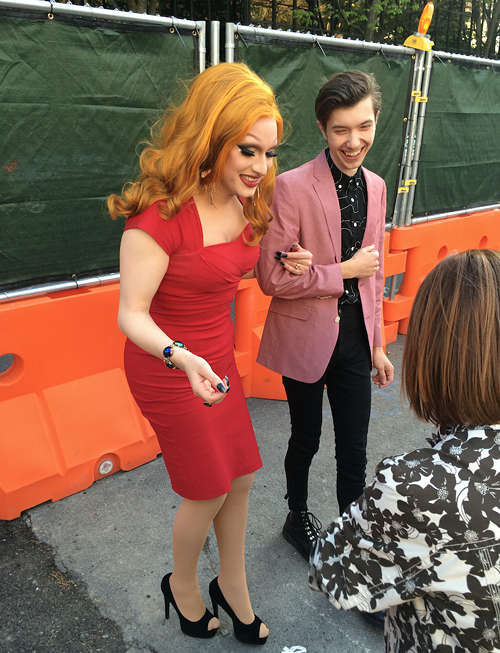 Before the show started, Jinkx stepped outside to greet the commoners who didn't get VIP tickets, and this woman asked to have her cast signed. Photo by Me 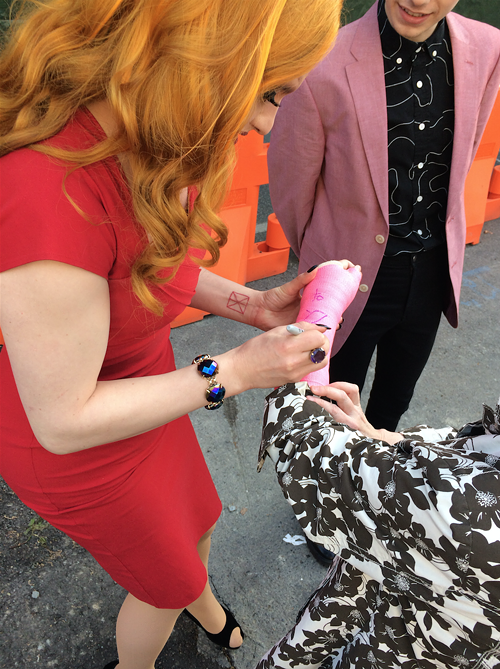 Underneath that Jinkxy exterior is one of the kindest people currently living. You better believe she signed that cast. Photo by Me
The Stranger depends on your continuing support to provide articles like this one. In return, we pledge our ongoing commitment to truthful, progressive journalism and serving our community. So if you’re able, please consider a small recurring contribution. Thank you—you are appreciated!
CONTRIBUTE NOW